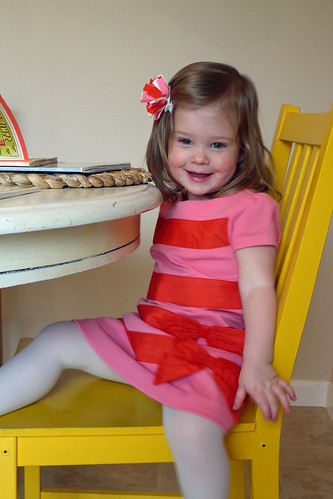 Has made huge strides in the verbal communication arena. Three months ago, she knew maybe two dozen words and now she uses two and three word phrases! Someone of the most common ones are "I love you", "excuse me", "bless you", "wake up!" and "shh, Maggie sleeping." She knows how to say please and thank you when prompted, but she'll say sorry on her own. We've overheard her apologizing to her doll on several occasions. Whenever something goes wrong she says, "Oh, baby." It started with Maggie spitting up but now she'll even say it if she drops food on the floor or something. If she wants to respond negatively to a question you've asked, she always says "no, no" in the funniest way. She often greets us with a "HI-lo" and it's just about the cutest thing.

Can sing! Her favorite songs to sing aloud to are from the Sound of Music, unsurprisingly, particularly "Do-Re-Mi", "The Lonely Goatherd" and "So Long, Farewell." She's pretty shy about it, so we mostly hear her singing along from the backseat. But sometimes we'll hear a little "do, a deer" from her crib while she's falling asleep too.

Now makes the sing of the cross by poking herself in the chest with both hands. She loves to bless herself with holy water font before and after Mass. She has a holy card of St. Joseph holding baby Jesus, given to her when we stopped in at the parish office, that she loves to have with her. She's also a big fan of the Mary statue on our family altar.

Knows all her colors and body parts. She can tell you her name and old she is. She's starting to understand counting, like if you take either one or two objects and ask her how many there are, she'll answer correctly. Her favorite color is still definitely purple, with "wellow" coming in a close second. She loves hearing the ABC song and having you write the alphabet for her. When she sees me writing, like addressing an envelope or something, she'll say "Letters! Wow!"

Still watches two tv shows a day. Okay, on a particularly bad day, it might be three. And she's watched a few movies during all the colds she caught this winter. We mostly rotate through Super Why, Daniel Tiger, and Blue's Clues. She's officially tired of Curious George now. I picked up DVDs of Franklin and Madeline on a whim at Target, mostly because they were some of my favorites growing up, and she's become really, really obsessed with Madeline.

She loves the Madeline books too and knows exactly where to find them on her bookshelf. She's really surprised us with how much she remembers from stories. I read her the book "Children Make Terrible Pets" once and only once. A week later, when I asked her to pick out a book to read she said "um....pet!" and grabbed that one. She's into holding the book and knows exactly when to turn the page for some of her favorite reads.

Dances by spinning around in circles and waving her arms around. Maggie finds the whole thing absolutely hilarious.

Has developed an obsession with the moon and stars. It all started when she had to start wearing night time diapers, which display the moon and stars prominently. She points them out in books and requests to go outside to see them before bed.

Is awesome at identifying animals and making their sounds, like the other day she spotted a cow on the side of the milk carton and exclaimed, "Cow! Moooo!"

Usually plays with her dolls (often setting up meals for them to eat with her felt food) or builds towers with her blocks. She is getting quicker at puzzles all the time and can do the shape sorter all by herself now.

Branched out from the swings at the park and is now more interested in the play structures. She has progressed from the stairs and moved onto climbing up ladders. From music class, she's learned how to tap her toes and at gymnastics, she's learned how to hang from the bars. She's really working on jumping but hasn't figured out how to get both feet of the ground quite yet.

Really likes to help in the kitchen. I enjoy it too when I've prepared to bake something with her, but I don't always appreciate her pulling up the stool when I'm trying to quickly throw something together for dinner while wearing a fussy baby. She also loves to help out with laundry and has even learned to fold diaper inserts into thirds. Unfortunately I don't actually need them folded into thirds and she doesn't enjoy having her work undone...

Gets excited about cookies, cake, and ice cream, but is really more of a salty fan when it comes to snacks. She would always choose pretzels or popcorn over animal crackers.

Doesn't even let you put vegetables on her plate anymore, although she loves to lick dip off carrots and dressing off lettuce. Weirdo. She will eat vegetables if they're hidden in quiche or, her very favorite, whipped into smoothies. She's also a really, really big fan of tomato soup. Breakfast is still the hardest meal to get her to eat. Sometimes there's no problems at all and sometimes it's an instant tantrum if you even suggest eating a bite of toast. Lunch is always fine and dinner is usually okay, although you just never know. The other day she saw me adding a dash of salt to my soup and requested that I do the same to hers, but when I complied, a meltdown ensued.

Has mostly stopped throwing fits that involve holding her breath or banging her head on the floor. She still definitely gets mad, though, and is usually sent to her room to calm down. Of course, there's a dramatic spike in whining and tantrums when she gets sick, which happened several times this winter. During the last bout of illness, she was particularly clingy with Adam and got really upset when he had to leave for work each morning. By the end of the week, she skipped the tantrum and just went in her room and shut the door as soon as he left for work!

Sleeps about thirteen hours a day total. She doesn't really need, or want, to nap every day anymore. Maybe two out of every three days? She has a very fluid bedtime because of the whole nap irregularity thing. Sometimes she's in bed at 6:00 and out like a light, while other times she's still happily chatting in her crib at 9:00. She's almost always up between 7:00 and 8:00 in the morning though.

Still got car sick once over the last few months, but at least made it out of the car before throwing up.

Is starting to show an interest in choosing her outfits. Dresses are definitely her favorite! She's pretty good about sitting still while having her hair done, but she doesn't like giving up control of the toothbrush. She loves putting on chap stick and uses our Target brand dental floss as deodorant.

Doesn't like it when Maggie grabs her clothes or hair, which is Maggie's primary way of showing affection these days. But she's starting to show more and more interest in her sister. She loves waking up Maggie from naps and when Maggie's upset, Claire will bring her a doll to cuddle with. She's Maggie's biggest cheerleader when it comes to rolling over and nobody can make Maggie laugh like Claire can. We just got Maggie an exersaucer and Claire's been enjoying helping her figure it out. I'd say she's growing into her big sister role quite nicely. I'm so excited to see them playing together! 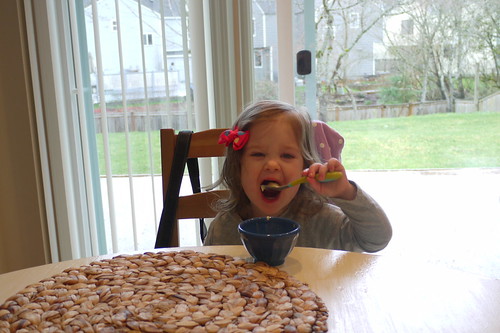 I read the Temperament God Gave Your Kids recently and I'm pretty sure Claire's a mix of choleric and melancholic. She's sensitive, silly, strong-willed, and sweet. Man, oh, man, we love this little girl.
Posted by Caitlin at 1:31 AM