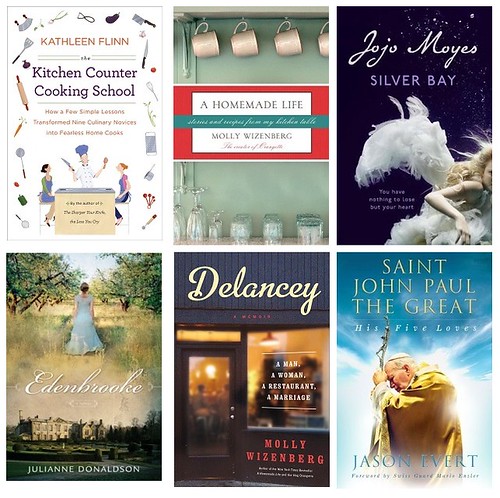 The Kitchen Counter Cooking School, Kathleen Flinn. A foodie memoir that takes place in Seattle is always going to be right up my alley. After graduating from the Cordon Bleu, Kathleen begins teaching very, very basic cooking classes to a diverse group of women from across the Puget Sound. Things like knife skills, how to roast a chicken, make an omelet, etc. Biggest takeaways? I think she convinced me to try making homemade chicken stock again. (It just takes up so much freezer space!) Also, super good idea: when you have an empty jam or mustard jar, you can make a simple vinaigrette in it with the last dregs before tossing it out.

A Homemade Life, Molly Wizenberg. Another Seattle-based foodie memoir. What can I say? I have a type. I read this on the flight to Austin for the Edel Gathering and it was a very enjoyable way to spend three hours.

Silver Bay, Jojo Moyes. A love story set in a small coastal town in Australia. I had a hard time getting into this one, but it eventually sucked me in. The Saturday that Adam was gone camping, I just laid on the couch and finished this book during nap time. Which means it has to be good, because I almost always spend nap time trying to cross everything off my to-do list. Or blogging...

Edenbrooke, Julianne Donaldson. Another love story, set in Regency England. It's specifically billed as a "proper" romance, so I didn't have to worry about skipping any pages. Just plain fun.

Delancey, Molly Wizenberg. Her first books ends with Molly's wedding. Delancey picks up shortly afterwards, when her husband, Brandon, has decided to open a pizzeria. He's always got some idea he's obsessed with, so Molly figures it will go the way of his plans to build violins or wooden boats. But pretty soon he's rented a space and started construction. Biggest takeaways? If you have to open a restaurant, make it one that only sells two salads, four types of pizza, and two desserts (all seasonal). So much easier. Also, I really want to eat at Delancey on our next date night. And a bunch of other restaurants she mentioned in the book.

John Paul the Great: His Five Loves, Jason Evert. This has been my adoration companion for the last few months. JPII is such a fascinating man. My sister actually gave Adam this book for his birthday, but I read it first. And I couldn't help peppering Adam with interesting tidbits every time I picked it up. (He loved this, I'm sure.) Like, did you know that he would be reading a book and have his secretary read a book aloud at the same time and he could process both texts at once? And that when he was shot, on the feast day of our Lady of Fatima, he sent the bullet to Portugal to be added to the statue's crown. There was already a hole in the crown the perfect size. Whoaaaaaaa.

Right now, I'm reading the Nesting Place. I've also got The Storied Life of A.J. Fikry  and Landline on hold at the library. What are you reading lately?
Posted by Caitlin at 5:54 PM