My friend from church, Michelle, offered to write a guest post about her family's favorite Easter books. She's a homeschooling mother of four and a trained Catechesis of the Good Shepherd teacher. We've bonded over attending the same Newman Center (although she went to Carnegie Mellon, not Pitt) and over our in-laws living in the same Houston suburb. The Catholic world is surprisingly small sometimes!

I am the mother of four small children (ages 2-7) and a catechist, trained in Catechesis of the Good Shepherd. In our family, we follow the philosophy laid out in the Religious Potential of the Child where we don't separate the crucifixion from the resurrection. Not only were the founders of CGS wise people who understood children through their observations, this philosophy matches my experience as a parent. Sofia Cavaletti explains in the Religious Potential of the Child:


"the proclamation of the death of Christ should never be disjoined from the announcement of His resurrection. We believe it is necessary to tie them together; we do not even pause temporarily on the death alone, considering perhaps it a well-known fact that the death was followed by the resurrection. Yes, it is known, but the fact is that very often the accent is applied to the death and so it comes to assume a greater vividness than the resurrection. The disturbing proclamation we give is of the resurrection, and it is on this that we should concentrate. Death is a common event; many men have had the courage to face death for love of their brothers. What is absolutely new is that, in Jesus, death is followed by renewed and eternal life. What we find so hard to grasp is the fact that, in Christ, life is stronger than death."

She then goes on to say that the length of any passion narrative should be no longer than the resurrection narrative. 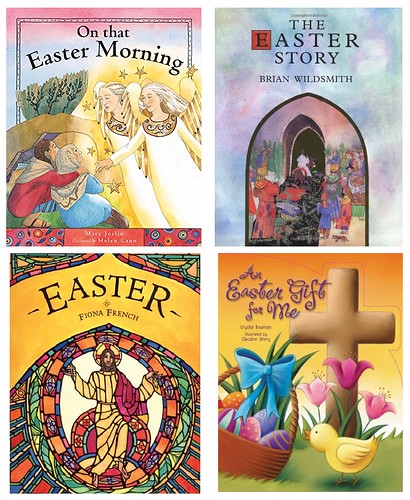 On that Easter Morning, by Mary Joslin

This book satisfies all of the criteria above, and the account is close to that in scripture. This is not a new book, but I only discovered it last year, and I am satisfied. This is my favorite.

Easter, illustrated by Fiona French, with words from the Revised Standard Version
Most picture books that have words straight from scripture use the King James Version, and while I know it's a classic in the English language, as a Catholic, I don't love the KJV. Our library has Fiona French's Easter with words from the KJV, and while I enjoyed the stained glass pictures, it has the KJV problem. I was so thrilled to find out that there's another version, published by Ignatius Press. Be careful; it took me two tries to get the right used one.

The Easter Story, by Brian Wildsmith
We love Brian Wildsmith's colorful illustrations, and especially love his colorful angels and gold accents. This was the first acceptable Easter story I found (fulfills most of the criteria laid out above). While it stays close to scripture, it's from the point of view of the donkey, which is just an unnecessary complication to the story.

Petook: an Easter Story, by Caryll Houselander, illustrated by Tomie dePaola
I don't particularly love the story of Petook, but I do love the Easter story that plays out in the background of dePaola's illustrations. I read it when my oldest was small, and she totally didn't get it. Now that she's seven, we are going to try again.

An Easter Gift for Me by Crystal Bowman
This is a short rhyming board book. Most of it is a very short synopsis of the life and ministry of Jesus, there's one line about the crucifixion, and on the next page he rises. I like the emphasis on the Resurrection rather than the Passion. I don't like that it leaves out the Last Supper entirely, but it's published by Zonderkidz, so it's not surprising (they are very not Catholic). This is the best I've found for toddlers (sad).

Me again! We've given the girls a themed book in the Easter basket every year. These have been our picks thus far: 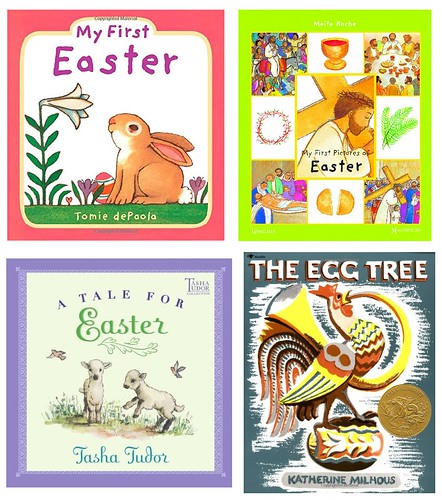 My First Pictures of Easter by Maite Roche. We gave this to Claire when she was just barely one. It's very simple; each page has a scene from Holy Week with one sentence of text. We absolutely love Maite Roche's illustrations and have all her board books available from Magnificat and Ignatius Press.

My First Easter by Tomie de Paola. When Maggie was six months old, Anne from Modern Mrs. Darcy posted about this book offered on super sale at Amazon - I think for less than $2. I'm a big Tomie de Paola fan, so I didn't think twice. Again, this is very simple and not particularly religious; just pictures of typical Easter symbols - lilies, eggs, bonnets, etc.

The Golden Egg Book by Margaret Wise Brown. That same year, when Claire was two, I waited too late to order a book online for her and had to shop in person at Barnes & Noble. This was the least offensive book I could find in the Easter section. It has absolutely nothing to do with Easter, but it's a cute story of friendship between a bunny and a duckling.

A Tale for Easter by Tasha Tudor. Maggie received this in her Easter basket last year. Like the other board books I mentioned, it has beautiful illustrations and very simple text; this time about a little girl preparing for Easter Sunday.

The Egg Tree by Katherine Milhous. Claire received this one last year. It's a Caldecott winning story of two children visiting their grandmother for Easter and painting eggs in the traditional Pennsylvania Dutch style.

We've also received a few books as gifts (including the Fiona French title mentioned by Michelle above) and found others at Goodwill, my favorite hunting ground for children's books. Ours has a surprisingly good selection! 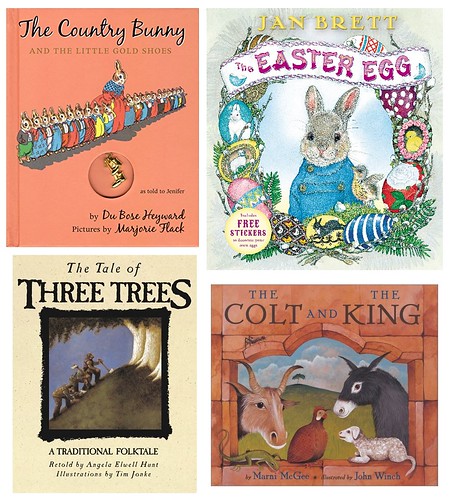 The Country Bunny and the Little Gold Shoes by Dubose Heyward. A mother of twenty-one little bunnies aspire to audition for the lauded position of Easter bunny. She's done such a good job teaching her children responsibility and how to contribute to the household. Not only do they reflect so well on her character that she gets the job, but they can pitch in and keep the house running in her absence.

The Easter Egg by Jan Brett. Don't you just love her artwork? All the bunnies in the forest are decorating eggs in hopes of winning the contest and getting to help the Easter bunny. Hoppi can't decide how to decorate his egg, until stumbles upon an abandoned robin's egg that needs keeping warm.

The Tale of Three Trees by Angela Elwell Hunt. Three little trees have big dreams - to become a holder of treasure, a fine ship, and a hilltop beacon pointing to God. Each gets his wish, although it doesn't look at all like they imagined.

The Colt and the King by Marni McGee. This book is about Palm Sunday. A donkey tells of the time he was called to carry Jesus through the streets of Jerusalem. He's scared of the huge crowds and comforted by Jesus.

You'll have to wait a couple weeks to find out my selections for the girls' baskets this year!
Posted by Caitlin at 6:31 PM