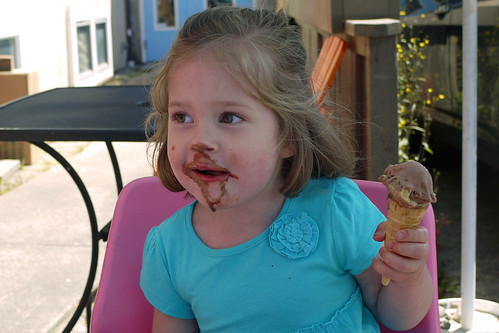 Knows how to write her name and draw or paint people. She can recognize and write many letters of the alphabet. She is constantly asking us how to spell things. She loves to write cards to her aunts and cousin. She likes to make books and illustrate stories, particularly Sleeping Beauty.

Recognizes numbers up to five. She's much more into letters and spelling than math.

Knows her full name and that of her sisters, including that their real names are Margaret and Beatrice. She knows our first names too and she has pretty good understanding of geography. She knows the name of our town and that it's right next to Seattle. She knows where my parents live and that we all live in Washington State. She knows where the rest of her relatives live in America and that some of our extended family live in Canada, which is another country. She knows that grandparents are your parents' parents, that aunts and uncles are your parents' siblings, and how cousins, great-grandparents, and great aunts/uncles fit in too.

Understands so much of the world already! She knows that you go to preschool when you're three, kindergarten when you're five, and then "big kid school" until you're a teenager, when you go to high school. She knows that after high school, you go to college where you learn how to be a grown-up. After college you can get married and once you're married you can have babies. She doesn't know how babies are made (just that you ask God to put one in your tummy), but she knows roughly how they come out and how you use your "big nipples" to feed them milk. She knows that Daddy has to go to work to get money to pay our bills and that he "makes computers" for his job.

Transitioned to a toddler bed (one side of her crib removed) right around her third birthday and stopped taking naps then too. She didn't have any issues with that transition. It was much more difficult to get used to sleeping in the same room as her little sister. We have our good streaks and our bad streaks. Thankfully we seem to be in a mostly smooth, easy joint bedtime routine at the moment.

Potty trained very quickly at three years and three months old, although she still wears pull-ups at night.We've realized that when she throws a tantrum at the drop of a hat, she probably really needs to use the bathroom!

Still sucks her thumb and is very attached to her beloved dolly. We let her bring dolly into the car and to church, a practice we wish we'd never started but seems too difficult to quit now. She sleeps with her doll and the quilt I made her every night, sometimes with the addition of a few other dolls and stuffed animals. She gets eleven or twelve hours of sleep a night, usually going to be at seven or eight and sleeping until seven the next morning.

Usually behaves very well at Mass. When she is feeling particularly bored she gets very mopey. She wants to be carried or lay down on the pew and just acts completely depressed. Reminding her of the rules before we go into church (which consist of whispering, staying in the pew, and not laying down) seems to make a big difference. She loves to shake our priest's hand afterwards and carry our tray of donuts at the coffee hour.

Gets very upset when she's not perfectly ready to start praying and feels that we started without her. She knows how to say grace, the Hail Mary, and the Glory Be. She doesn't really sing along at Mass but she knows several hymns. The ones we sing around the table for holidays (O Come O Come Emmanuel in Advent, various carols at Christmas, Take Up Thy Cross during Lent, and Jesus Christ Is Risen Today or The Strife is Over at Easter). She also knows some Marian Antiphons because Adam sings them to the girls before bed. Her favorites are Regina Caeli and Salve Regina. She can sing them both in Latin!

Mostly listens to and sings nursery rhymes, songs from music class, and Disney movie soundtracks. Her favorite song to sing is "Once Upon A Dream" from Sleeping Beauty. After seeing the Nutcracker ballet, we listened to the music non-stop all winter. Her favorite songs were the fast ones, particularly "Hot Chocolate" and "Candy Cane." Eventually her and Maggie (whose favorite song was the Waltz of the Sugar Plum Fairy) started arguing so much over which to listen to first that we put the soundtrack away until next Christmas.

Can do puzzles up to seventy-two pieces on her own. She only naps at home about once a month, but she does "quiet time" while Maggie is sleeping. Her favorite activities are puzzles, stringing beads, lacing cards, coloring books, magnetic blocks, and books with CDs.

Loves the color purple! She picks out her own clothes and gets herself dressed each morning. At first, she didn't want to wear jeans because they were too hard to button by herself. Now it's turned into only wanting to wear dresses and skirts. She even wanted to wear skirts over her pajama pants until we got her some nightgowns! It's totally fine, except she sometimes picks interesting legging combinations to wear with them and she's not always amenable to my advice about what matches.

Is gradually becoming less picky. She eats bell peppers now, as well as carrots. She also likes apples, grapes, strawberries, and watermelon. She'll eat any type of meat and she particularly loves tuna fish sandwiches. Of course, she's still a huge fan of cheese in all forms. Her favorite foods are the standard little kid classics - pizza, hot dogs, macaroni, french fries, gummy candy, various forms of chocolate (milk, ice cream, cookies). She usually has toast with scrambled eggs for breakfast and a sandwich or cheese and crackers for lunch. She loves to go out to eat, just like her parents!

Watches one or two shows a day. She still really, really loves Daniel Tiger but also watches Franklin, Barney, Madeline, and Angelina Ballerina. We try to limit movies to once a week, although they were more frequent in my last weeks of pregnancy! She loves Winnie the Pooh, Cinderella, Sleeping Beauty, The Swan Princess, Tangled, and Frozen. She's seen three movies in theaters. The first was the live action Cinderella movie right after her third birthday and it went fine. But when we took her to see Inside Out in the summer and The Peanuts Movie last fall she got very overwhelmed and upset. We'll try again in a couple years.

Has a great attention span for listening to chapter books. We've read five books from the Betsy series by Carolyn Haywood and the first two books in Beverly Cleary's Ramona series. We read plenty of picture books too, of course. She has several stories memorized, mostly board books. She likes to "read" them to her dolls and little sisters.

Lives in a world of make believe. She spends all day leading her sister through pretend scenarios. Usually they are going on some sort of trip - camping or to the beach. Flying to San Francisco is still a very popular theme. They go on lots of picnics, or to restaurants, or throw birthday parties for their dolls. Just this afternoon they were both at the hospital having a new baby. Now that Maggie is getting older, she's not always content to go along with Claire's ideas and that has definitely led to some tension.

Could play outside all day long. She's a true Pacific Northwest girl - pouring rain and the cold water at the lake really don't faze her. She took swimming lessons daily for two weeks at the neighborhood swim club last summer. She's very comfortable in the water but she didn't make much progress in actually learning how to swim. We also did a very casual parent-tot soccer program at the local park last summer. Some weeks she was really into it and other weeks she'd have rather been picking dandelions. She really, really loves her twice annual pony riding lessons at the farm park and takes about "her pony Thunder" all the time. She's never met a climbing structure she couldn't handle and is learning how to swing on her own.

Has been taking music class with the same teacher since she was six months old. We added Catechesis of the Good Shepherd to the schedule this year, which we call preschool. Most of the time she is very happy to attend these classes. Occasionally something little will set her off like not getting to listen to "her song" on the car ride there or feeling like she didn't have enough time to play beforehand and she'll suddenly put up a huge fight over going to class. In the fall, she took a kids' cooking class at the community center and absolutely loved it. Never had any of the issues I mentioned above. This spring, she's been taking a dance and gymnastics class (thirty minutes of each) with Maggie too. They are always both so excited to attend and so far seem to like the dance portion more than gymnastics, but we're glad they're getting to try both.

Helps set the table and clears her plate after meals. She's usually eagerly offering to help with cleaning or yard work. It's much, much easier to bake with her now that she can listen attentively and pour ingredients without spilling. Or at least not spilling much! It's very cute to watch her imitate my chores, like folding and putting away laundry. She cannot wait until she'd old enough to learn to sew.

Is old enough to really play with her friends. Her closest friend is named Cecilia and they could play happily together for hours. Cecilia has siblings the same age as Maggie and Betsy so play dates with them are really great.

Takes great care of her two little sisters. She helps Maggie with her shoes, brushing her teeth, and starting new audio books. She even humors her by addressing her as Sleeping Beauty as Maggie insists on calling herself almost all the time. She will give Betsy her pacifier, grab me a diaper or burp cloth when needed, or sit next to her blanket on the floor and read her a book while I put Maggie down for a nap. She doesn't always listen at home, of course, but when we're out she's great at following instructions like holding on to the stroller or Maggie's hand. 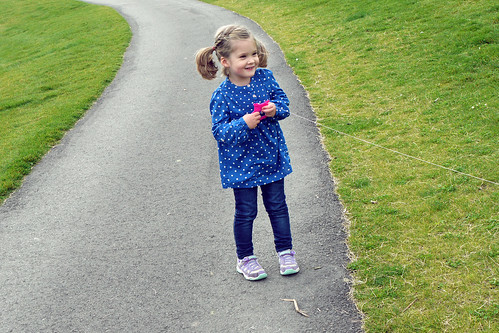 We love this sweet, silly girl so much and could clearly talk about her forever!
Posted by Caitlin at 6:26 PM