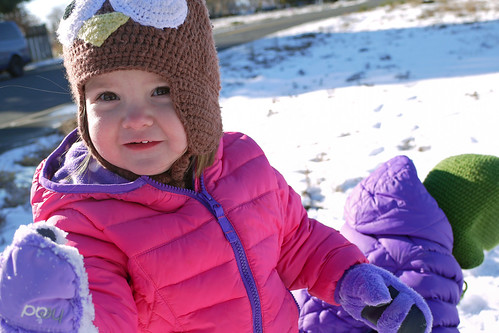 Prefers to be addressed as Sleeping Beauty and refers to herself by that name in the third person. She'll often ask me for something by saying, "Sleeping Beauty's Mommy?" She loves to sing and her favorite song is "Once Upon a Dream" from Sleeping Beauty.

Knows all her colors! For the longest time she could only identify pink, but in the last month she seems to have gotten them all. Maybe because she's spent so much time coloring with Claire.

Is afraid to go down slides after getting hurt coming down one at an indoor playground this winter. When she does slide, its backwards on her tummy. She's very good at climbing though and mostly refuses to ride in a baby swing.

Pretend plays with Claire all day long. They're usually taking care of their babies or going on some sort of trip. Now that Maggie's older, she's not always content to just go along with Claire's ideas, which definitely leads to some tension. A frequent argument is whether its morning time or night time at the castle.

Can string beads, complete basic wooden puzzles, and build a mean block tower. She loves to draw, paint, and do play dough. It's so cute to watch her try to write letters like Claire! She can keep up with some games, like Zingo and Candyland, although of course she often loses attention before the games ends.

Loves wearing dresses, tutus, and anything pink. She usually requests wearing her flower dress or her heart dress. If she's wearing pants and a shirt, a tutu is always needed to complete the outfit. She's frequently wearing a crown or fairy wings around the house.

Reads books to herself constantly, but still doesn't have a very long attention span for stories. I'm trying to extend it by reading them stories while they eat lunch whenever I can. She's currently a big fan of Angelina Ballerina and Fancy Nancy books.

Watches one or two episodes of a show after naptime. Daniel Tiger is the perennial favorite. Movies are a once a week treat, unless I'm nine months pregnant. She loves Winnie the Pooh and, unsurprisingly, Sleeping Beauty.

Rarely eats much for dinner. She's not very picky about fruits and vegetables, but meat is a different story. Because she mostly just picks at her dinner, she always wakes up very hungry for breakfast! She usually has toast and scrambled eggs, though not with Cajun seasoning like the rest of us. She always begs for a cheese stick with her lunch. Also unlike the rest of us, she is more discerning when it comes to sweets. For some reason she doesn't like donuts. She just licks the chocolate icing off her half after church each Sunday.

Naps maybe every other day. We almost always wake her up around 3:00 so that she'll be ready for bed the same time as Claire. She learned how to climb out of her pack-n-play in the guest room last fall, but she's never tried to climb out of her crib. When she doesn't nap, she just sits in her crib happily singing and chatting with her dolls for upwards of an hour.

Loves her pacifier with an undying devotion, though we've limited her access to just sleeping time. Now she seems to prefer her Corelle baby doll to the soft dolly she's had since she was under a year old.

Doesn't really show any interest in using the potty like her big sister, but knows that she'll start wearing underwear when it's summertime. We're also planning to take the side off her crib before our vacation in August.

Really enjoys her one-on-one time with me while Claire is at preschool activities. I thought she would be sad that she didn't get to stay at catechesis or the big kids' music class because she tries so hard to keep up with Claire. She's perfectly happy to drop Claire off and go the grocery store or library with me instead.

Is a total daddy's girl at the moment. Right after Claire moved out of the stage of wanting Daddy to do everything for her, Maggie moved into it. It's surprising how much a toddler can hurt your feelings. At least I always have someone that likes me!

Dotes on her baby sister. She doesn't like to hold Betsy like Claire often requests, but she's always giving her hugs and kisses. She likes to lay down next to Betsy on the floor and read her books. So far she hasn't done anything negative to her, besides trying to feed her a pretend baby bottle.

Throws pretty epic tantrums and has a black belt in whining. The tantrums were especially frequent right after Betsy arrived, which also coincided with the arrival of her two-year-old molars. We hear lots of "Go away!" and "I do it myself!" around here. 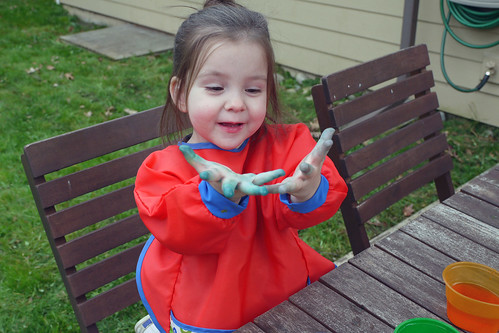 This is how I want to remember Maggie at two and a half. Yesterday evening, she was running from the playroom to the nursery, as she does countless times each day. Always runs, never walks. We were sitting in the living room as she ran past, Adam called out, "Hey, cutie patootie!" Maggie answered, "I'm not a cutie tootie. I'm Sleeping Beauty!"
Posted by Caitlin at 11:00 PM