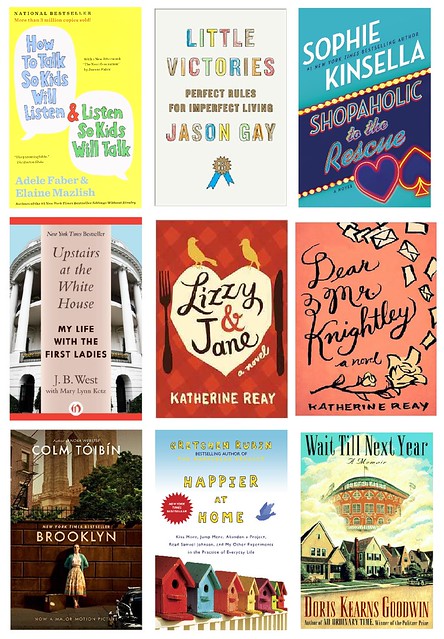 How To Talk So Kids Will Listen & Listen So Kids Will Talk, Adele Faber & Elaine Mazlich. We read this for our parish mom's group book club this fall and finished in January. It was easily the best parenting book I've read. Adam even read large sections of it, which is quite a feat. We had the anniversary edition, which included an afterword from one of the author's daughters. She said that no matter what happened at school or on the playground, it would always be okay because she could go home and talk about it with her mom. I'm pretty sure that's what we all want most as parents!
Little Victories: Perfect Rules for Imperfect Living, Jason Gay. I saw a review of this book and then it popped up on the Overdrive app when I was looking for something to read right before Betsy arrived. Apparently he's a sport columnist for the Wall Street Journal? It was amusing enough to finish but not particularly memorable. The review mentioned it was perfect for fans of Dave Barry, but I've never read anything by him.
Shopaholic to the Rescue, Sophie Kinsella. The day I got home from the hospital with Betsy, I got an email that the digital copy of this was now available on Overdrive. Perfect timing! Even though I wasn't a big fan of the last Shopaholic book, I'll always have a soft spot for Sophie Kinsella. This was much better than the previous installment of Becky's adventures and I happily breezed through it in less than twenty-four hours.
Upstairs at the White House: My Life with the First Ladies, J.B. West. This was one of those fascinating reads that had be constantly regaling Adam with interesting facts. West was the chief usher at the White House from the Roosevelt through the Nixon administrations. The Chief Usher is pretty much the head of operations for the White House, so he worked with all the first ladies constantly to plan events and manage the household staff. If you're as interested in American history and the presidency as I am, you will absolutely love all the intimate details in this book, like how many presidents and first ladies took daily afternoon naps. I'm sure you could easily guess which president like to take daily swims....in the nude!
Lizzy and Jane, Katherine Reay. Modern Mrs. Darcy has a Kindle Deals page on her site that she updates daily. I snagged this one when it was on sale for $1.99. It's about Lizzy, a chef at a New York restaurant who goes home to Seattle when her sister, Jane, is diagnosed with cancer. Jane has a penchant for Austen novels, hence the title. I always love reading books set it in Seattle! This was a really enjoyable read, still firmly in the chick-lit category like Sophie Kinsella's novels, but definitely on the more serious side.
Dear Mr. Knightley, Katherine Reay. I also got this one in a Kindle sale. Apparently it's a modern retelling of "Daddy Long Legs," a book from the early 20th century. The main character, Samantha, grew up in foster care and is awarded a full scholarship to Northwestern from a private foundation. The only caveat is that she has to write weekly letter about whatever she'd like to the foundation's director. I think this one was my favorite of Katherine Reay's works. She's apparently part of the Christian genre, but I didn't find her preachy at all.
Brooklyn, Colm Toibin. I heard many, many good things about this movie and was so excited it for it to be released on DVD. I watched it the day of and became completely obsessed, so of course I couldn't wait to get my hands on the book. I think I loved the book even more. The way they had premarital sex in the book made much more sense to me. Immediately afterward they decide to go to confession. Eilis is too embarrassed to see her Irish priest, Father Flood, so Tony suggests they go to his Italian parish instead. When Eilis points out that those priests only speak Italian, Tony assures her that they understand certain key phrases in English!
Happier At Home, Gretchen Rubin. I'm a big fan of Happier, the podcast Gretchen does with her sister, Elizabeth. Listening to them week after week made me want to reread my favorite of her books. It was just as good the second time! For some reason I couldn't really get into her latest book, Better Than Before. Maybe because I've heard most of the information after following the podcast for the past year?
Wait Till Next Year, Doris Kearns Goodwin. This memoir of a girl growing up in Long Island in the 1950s as a Catholic and a Dodgers fan was the perfect follow-up to Brooklyn. My favorite parts were her descriptions of growing up in the church before Vatican II. Most her friends in town were Catholic, except for her Jewish next-door neighbor, whose parents bought her a white dress so she wouldn't feel left out when everyone was celebrating their first communion! Doris Kearns Goodwin is now a major presidential historian - the movie Lincoln that came out a couple years ago was based on her biography. 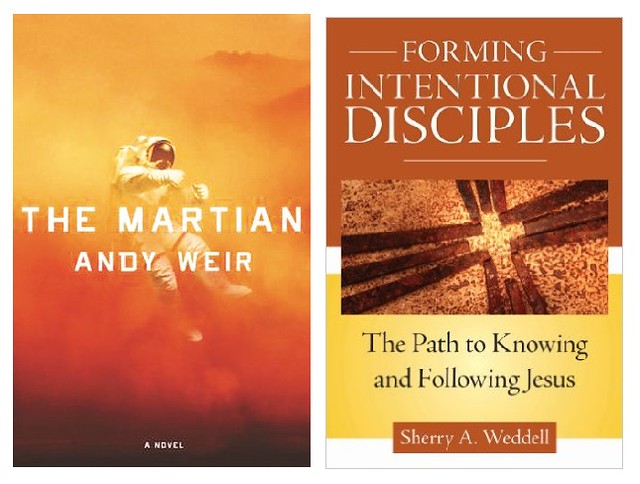 The Martian, Andy Weir. I gave this to Adam for Christmas. We both devoured it in early January and then watched the movie. I knew it would be right up Adam's alley, but I was surprised at how much I enjoyed it as well. I haven't read any science fiction besides what was assigned in school. It was, quite unexpectedly, really funny and the movie was a great adaptation.
Forming Intentional Disciples, Sherry Weddell. We are supposed to read this for a committee we're on at church, but because we only have the hardcopy and I've read anything outside of the Kindle app on my phone in months Adam's just been sharing interesting passages with me.  Like a parish in Michigan that's produced thirty priests in thirty years. In contrast our parish has produced just one in a hundred years! The author actually goes to the parish we attended for a few months when we first moved to Seattle - the liturgy was beautiful but we quickly realized it was too far away. 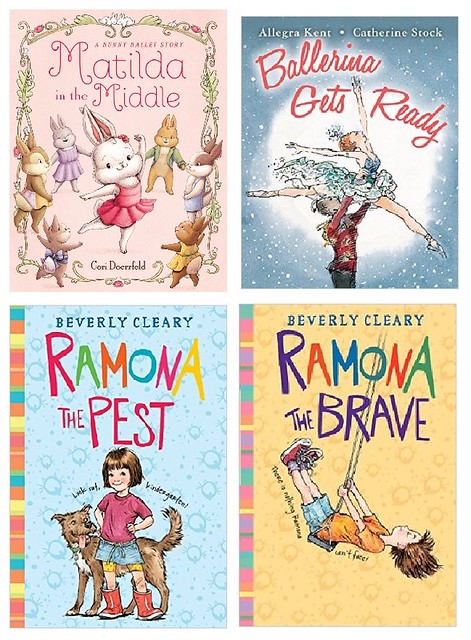 Matilda in the Middle: A Bunny Ballet Story, Cori Doerrfeld. Our library system recently reorganized all the children's books by category - holidays, fairytales, animal stories. There's a "sparkly" section filled with tales of ballerinas and princesses that our daughters make a immediate beeline towards. This was actually a really cute find though, about a bunny born into the middle of a large family whose siblings all gather to cheer her on at her first ballet recital.
Ballerina Gets Ready, Allegra Kent. Another find from the sparkly section. It's written by a former principal dancer from the New York City Ballet and chronicles an average day in the life of a professional ballerina - rehearsals, costume fittings, and finally the big performance.
Ramona the Pest, Beverly Cleary. After finishing all of the Carolyn Haywood Betsy books (at least all the ones still in print), I chose this for my next read-aloud book with Claire. The chapters are a bit longer and there's not as many pictures, so it took her a bit longer to get into. Beverly Cleary is so great at describing children's emotions! Several times in this book she hinted that children don't appreciate when their parents talk about them as if they're not even there.
Ramona the Brave, Beverly Cleary. Ramona the Pest chronicles her kindergarten year and Ramon the Brave is all about first grade. Again, Beverly Cleary just really gets kids. There's a part at the end when Ramona gets in trouble at school over a misunderstanding. Her parents say, "Oh, Ramona, what are we going to do with you?" And Ramona, despondent and frustrated, answers, "Love me!" I am not ashamed to admit I cried when reading that exchange to Claire. After we finished both books, we watched the Beezus and Ramona movie. My mom was visiting and watched it with us. By the end all three of us were crying!

We finished both of those Ramona books before Betsy arrived. I think Betsy's old enough for Claire and I to dive into chapter books again. I just ordered Beezus and Ramona, which is actually the only book in the series from her sister's point of view. But after that I'd like to take a break from the series because some of the other books deal with heavier stuff, like her dad getting laid off, that I don't think Claire would quite understand yet. Anyone have any chapter book recommendations for a newly minted four-year old?
Posted by Caitlin at 1:35 AM