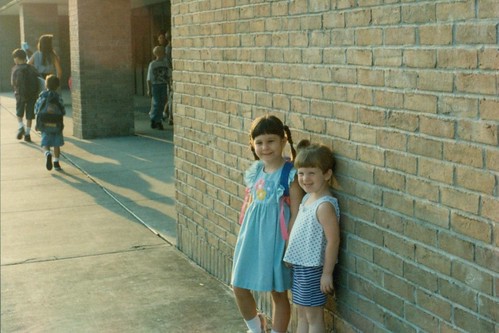 My first day of kindergarten!

When I was growing up, the public elementary school a few blocks away was the obvious choice. Our parish didn't have a school and there were no magnet or charter schools in our district. Homeschooling wasn't nearly as popular as it is now. And I grew up in suburban Houston, where it was rare to meet someone who didn't attend church regularly.

Now, I live across the country in suburban Seattle and I have one year before my oldest daughter will be in kindergarten. Here, we have an overwhelming number of options! There's...

- The parish school. We love our parish and we've heard great things about the school. We would know several friends in Claire's class. I'm really happy they still have a half-day kindergarten option. But, of course, this would require significant financial sacrifices.

- The local elementary school. We live in a great school district, academically. Our kids would be bussed to elementary school and the bus stop is right across the street from our house, so we wouldn't have to wake the baby for pick up. I'm not thrilled that they're doing away with half-day kindergarten next year. Also, articles like this one and this one make us worry about the secular environment.

- The public charter school. It's called a community school, so you have to volunteer a certain number of hours each year, they have mixed age classrooms, and they don't give letter grades. You have to win the lottery to get in, but if your oldest child does then the rest of your children would get in automatically. This school doesn't enroll until first grade though, so it's kind of a moot point.

Of course, there is also homeschooling, which has greatly risen in popularity since I was a child. Seattle seems to be a pretty homeschool friendly area. If I were to homeschool my children, I would definitely want to try a coop, of which there are also several choices! There's...

- The public family learning center. The kids go all day, twice a week. They do the four core subjects as well as electives like art, Latin, and P.E. Kindergarten through third grade go two weekdays, while fourth through eighth grade go two other weekdays. So, once you have kids in multiple grades, you're going to be spending a lot of time driving them around and you wouldn't have a time when all your school-age kids are occupied. You are also giving up some curriculum choice and agreeing to more supervision from the school district.

- The enrichment program at a private Catholic school. Kindergarten through eighth grade all go on Tuesday and Thursday afternoons. They have lunch and recess, then do art, choir, foreign language, poetry memorization, and P.E. But, it's a twenty minute drive away, which would mean a lot of sitting in the car for younger kids. I think this would be ideal if we could hire a babysitter to watch the little ones those afternoons, so they could nap and I could run errands. Of course, the cost of the program and a babysitter would be almost as much as our parish school.

- The traditional coop at a nearby parish. They meet all day, one day a week and have all sorts of electives for preschool through high school. Each parent is assigned some sort of job and you have to stay on campus with your younger children.

Betsy's birth was a crossroads for our family. If we had a third c-section, we would have just planned for one more child. Having more than five or six c-sections is quite risky and we thought we would need to save some for the possibility of an NFP "oops!" at some point in our thirties.

Because our two previous birth experiences had not gone at all well, we were not very optimistic about the success of a VBAC after two c-sections. We spent the two years between Maggie's and Betsy's births thinking we would most likely have four children. Homeschooling four children seemed like a pretty achievable goal, so for the past two years that's how we thought our kids would probably be educated.

Thanks be to God, Betsy's birth was a VBAC, exceeding all of our expectations. At least for the moment, we no longer have to put a cap on our family size due to health reasons. Given that I had her at twenty-six, we could potentially have twice as many children as we were previously thinking. Running a household of that size is a pretty big job and I'm just not sure if I could handle adding teaching to that load.

We feel like we're back to square one and since we're still undecided, it made sense to sign Claire up for preschool in the fall. She'll be going to a play-based cooperative preschool three afternoons a week. They do centers, sing songs, read stories, have show-and-tell, and play outside. She took a tour a few months ago and didn't want to leave! Since it's a coop, you have to volunteer once a week. Adam will take a long lunch break to work our shift, just coming early and staying late at the office that day. I think it will be a great experience for her and for our whole family.

It's so crazy to think that we only have a little over six months until kindergarten registration!
Posted by Caitlin at 12:07 PM