Besides visiting my parents for July 4th and a bunch of Adam's family coming to visit, we squeezed even more fun into July! 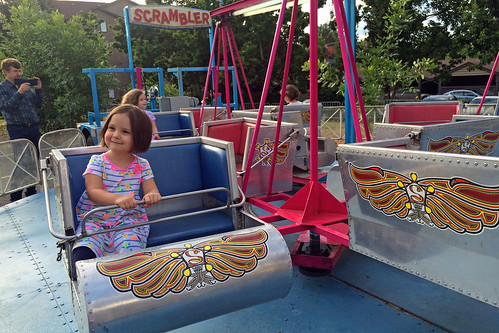 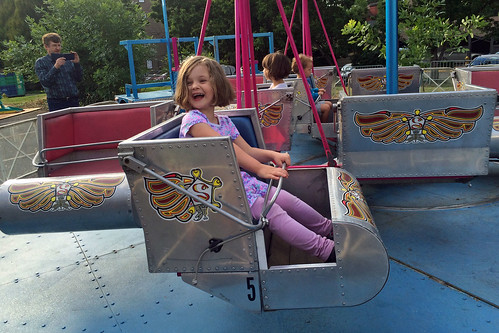 Adam's family arrived on a Saturday, the same weekend as our town's summer festival, so we went the Friday before everyone flew in. Claire and Maggie got to go on a couple of the little kids' rides and then we hung out by city hall, listening to live music and eating ice cream sandwiches. A perfect summer evening.

They left a week later and the following day we became godparents to Eloise, the adorable second daughter of our dear friends, Libby and Jon. Our combined five girls under five were surprisingly well behaved during Mass. Libby and Jon threw a really wonderful brunch to celebrate afterward. 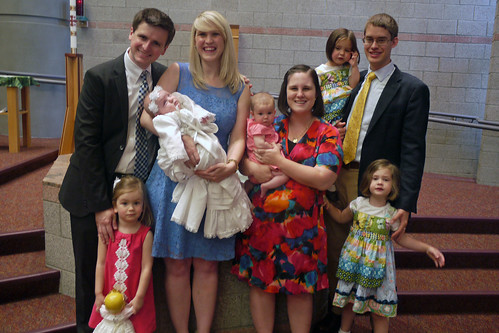 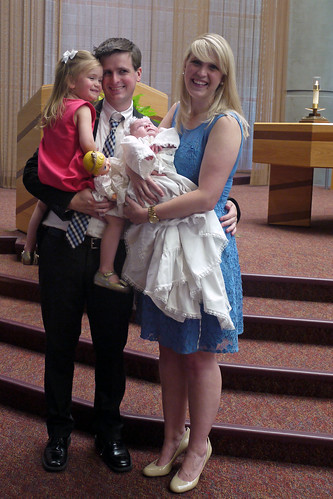 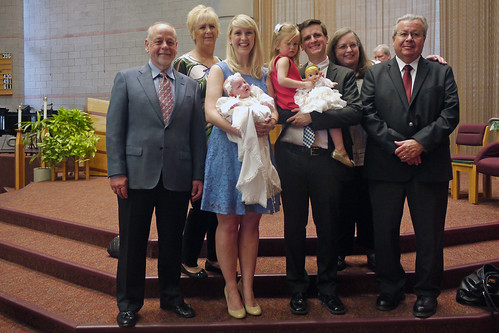 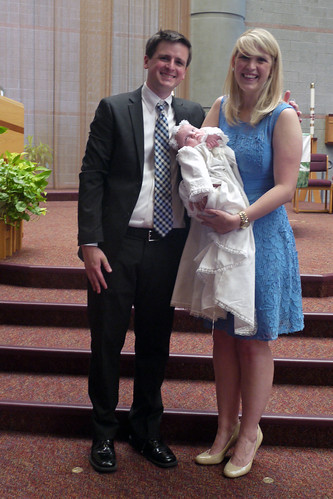 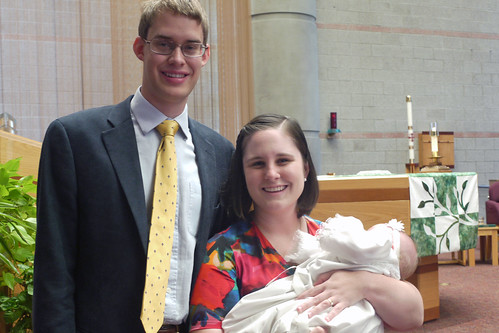 My family came to visit the last two weekends in July. My mom's sister lives on Vancouver Island and took the passenger ferry from Victoria to Seattle. They picked her up one weekend, took her to Richland for the week, and took her back the next weekend. Their first visit was shorter, so we didn't do much of note except go to our town farmer's market. After they left on Sunday afternoon, we went blueberry picking at Mercer Slough Farm. The City of Bellevue owns two U-Pick blueberry farms - how neat is that? 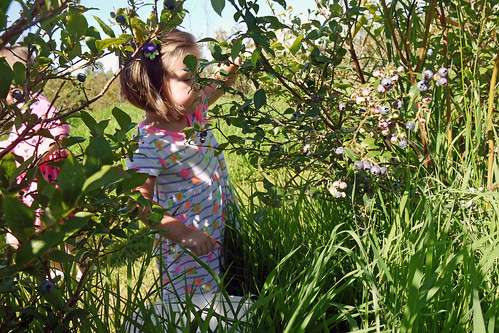 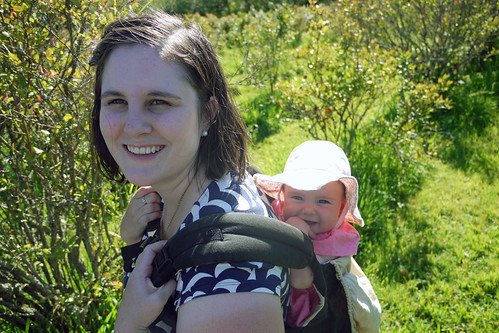 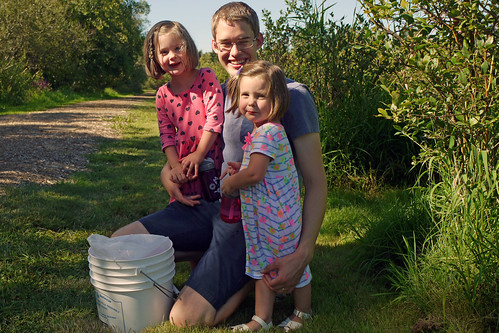 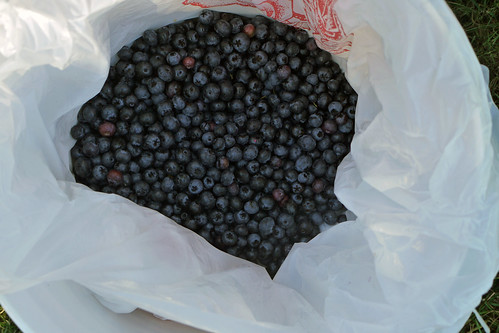 On their longer visit the next weekend, we had brunch in downtown Kirkland and then went to the lake in our town later in the afternoon. The adults saw a movie each evening, so Adam and I took turns going. I saw Bad Moms (which I, as the target audience, found very funny) and Adam saw the new Star Trek movie (which he didn't like quite as much as the other two). 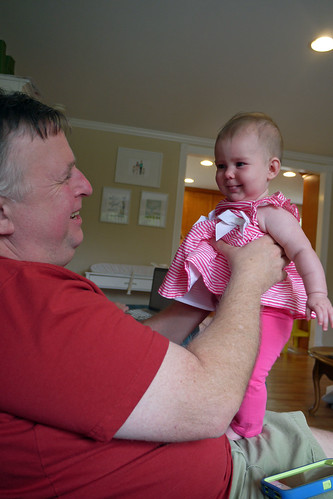 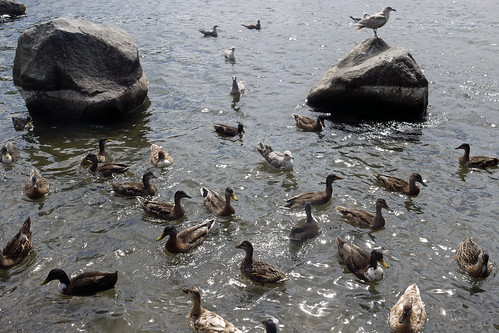 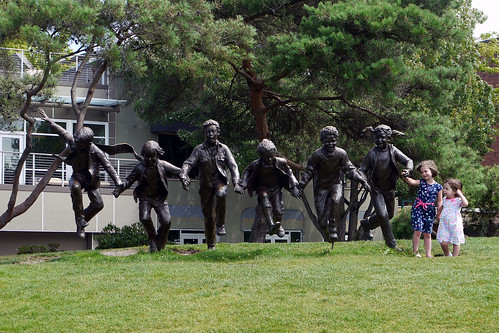 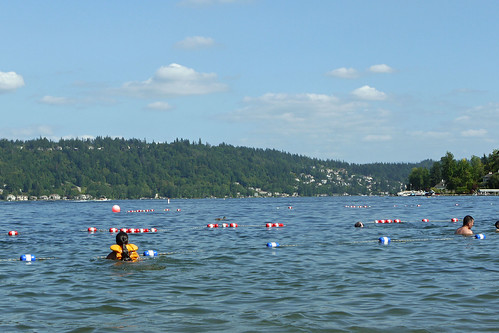 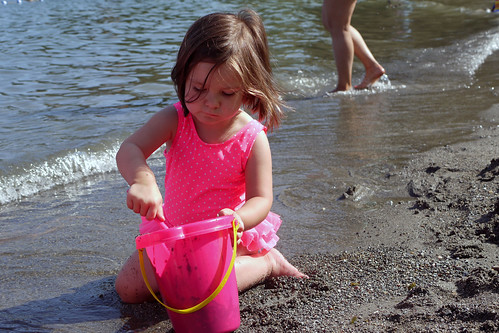 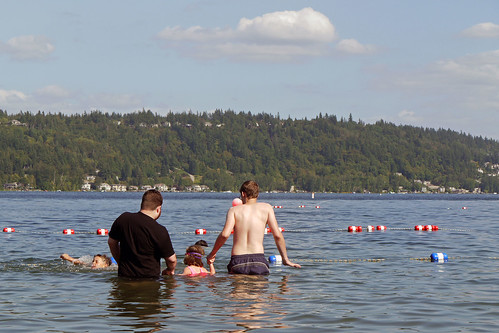 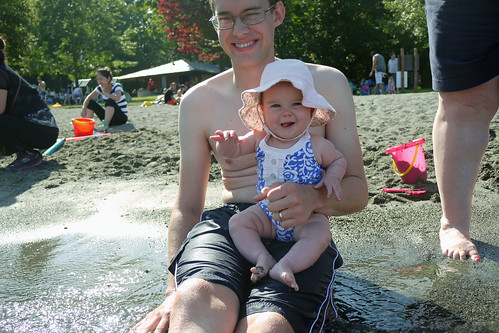 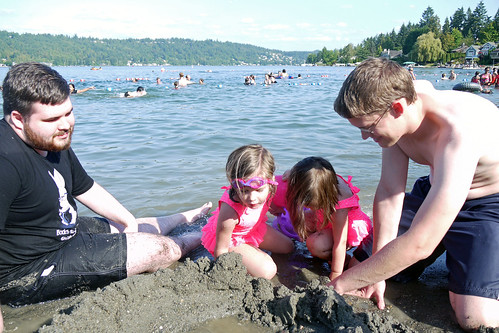 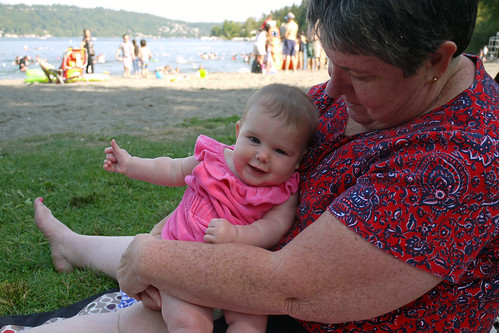 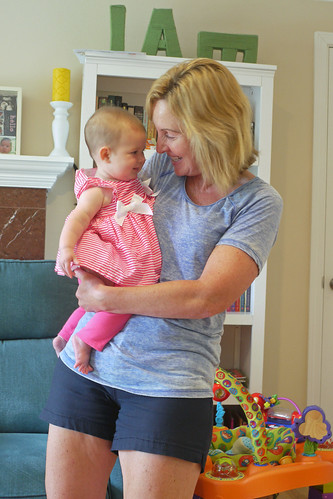 The last day of July is our anniversary. Six years! Because my family was in town, we were able to sneak away to 7:30 Mass by ourselves. We hosted a church thing that evening, but we still served our traditional anniversary meal of fajitas and derby pie. (The food from our wedding luncheon.) We have a date night planned this Friday to celebrate! 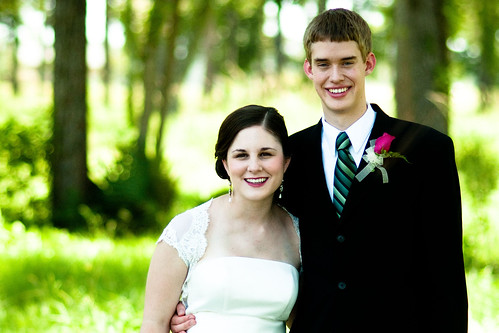 During the week, we've been keeping ourselves occupied with very low-key summer activities. Claire did two one-hour a day "camps" at our local park. She had tennis the week before July 4th and soccer the week after. We took a break from scheduled activities while Adam's family was visiting, of course, and then the last two weeks of July both older girls did swim lessons at the private pool down the street.

Since we were able to walk to the pool and were home most of the day, it was the perfect time to focus on getting Betsy to nap on her own. After a couple days of minor fussiness, she is on a predictable schedule and I feel a thousand times better about life. Totally worth it. She is also reliably sitting up and starting to eat solid foods. We're not really doing purees this time around - she's just been eating what she can from what the rest of us are having. She can gum on watermelon, apple slices, green beans, bell peppers, bread or pizza crust, etc.

Maggie moved into a toddler bed (aka her crib with one side removed) right after our July 4th road trip. It was a completely seamless transition. Potty training hasn't been perfect, but overall is going really well. Oh, and I can't forget to mention that Claire can buckle her car seat completely on her own now! So happy that I no longer have to climb into the back of the van to buckle her anymore.

Remember how we hired a cleaning service to come weekly at the beginning of January? Then in May we were debating hiring a lawn service or just dropping the cleaning to every other week? Well, we decided to stick with cleaning but the service we were using (Handy) just stopped showing up at the end of June! We never had any issues up until that point. They rescheduled twice the week before July 4th and both times emailed me shortly before the appointment to cancel. I made another appointment the day before Adam's family arrived and didn't receive a cancellation email, so we went to soccer camp like usual and expected to come home to a sparkly clean house. Nope, they just hadn't even bothered to let me know they weren't coming this time. Adam and I got to spend Friday night frantically cleaning instead. Adam sweetly arranged a one-time cleaning from a different service later in July, but it was definitely more expensive than Handy so we were planning to just make it through August ourselves. (We can't fit a cleaning service into the budget permanently, so we were already going to quit at the end of the summer.) But, I just got an email from Handy this afternoon advertising a flash sale - 2 hours of cleaning for $30 - so I made another appointment for Friday. We'll see what happens...

We're still kind of in survival mode when it comes to dinner, but I've somehow squeezed time in for baking. Probably because I think it's much more fun! I made blueberry buckle with our freshly picked berries and then froze the rest to use in muffins throughout the year. After I over-zealously bought a ton of cherries at Costco, I made these cherry turnovers for a funeral to use them up. I've never worked with laminated dough before, so I was pretty proud of how those turned out. My parents have zucchini coming out the ears from their garden and brought some to us when they visited. Of course, we ate plenty just as a side dish with dinner, but I couldn't resist also whipping up some zucchini bread - I made one chocolate and one orange coconut. I've also made so, so, so much applesauce with the fruit from our backyard tree. Hopefully just one more batch to go, whew.

PBS has been airing the new season of The Great British Baking Show. Finally! You can watch the episodes online as well and if you make a small donation, they'll give you access to the previous seasons too. We've also been loving the second season of the Jim Gaffigan Show. Since we don't have cable we bought a TV Pass on Amazon, but it's totally been worth the $15. Cardinal Dolan even makes an appearance in the first episode!
Posted by Caitlin at 6:07 PM