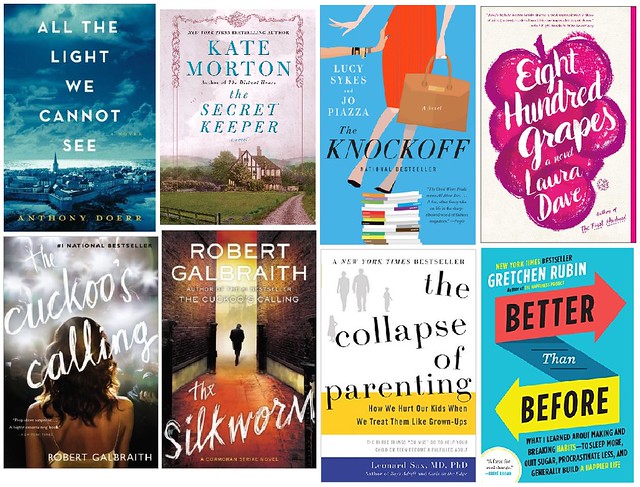 All The Light We Cannot See, Anthony Doerr. A poetic, engaging book that lives up to all the hype. I feel like I need to read it again to really appreciate every beautiful sentence. I loved listening to the Fountain of Carrots podcast episode on the book and reading Bishop Barron's review. I tried to read his memoir, Four Seasons in Rome, next but only got halfway through before it was due back at the library.
The Secret Keeper, Kate Morton. My very first Kate Morton novel, set in WWII era London, although it also jumps around to the 1960s and the present day. I stayed up until midnight to finish and totally did not see the twist coming at the end. From what I've heard, most fans agree that this is her best work yet. I think I'll have to read more to find out!
The Knock Off, Lucy Sykes and Jo Piazza. When Modern Mrs. Darcy published her summer reading guide, I immediately went to Overdrive to place everything on hold. The Knock Off was available right away. It's about an editor fighting to keep her magazine from being turned into an app. If you loved The Devil Wears Prada, this will be right up your alley. Except this time the older and wiser editor is the good guy in the story.
Eight Hundred Grapes, Laura Dave. This was the next novel that came available from Modern Mrs. Darcy's guide. It's a love story set on a winery in Napa Valley. I didn't enjoy this nearly as much as The Knock Off, but it was still a pleasant read overall. I read it while sitting in the back of the van with Betsy while driving to my parents' house and it certainly wasn't a bad way to pass the time.
The Cuckoo's Calling, Robert Galbraith. These mysteries are actually written by J.K. Rowling. They center around a London private detective, Comoran Strike, and his assistant, Robin. The first in the series is about a supermodel's suicide. Or perhaps murder? I'm not really a murder mystery person, but I was intrigued because of J.K. Rowling and figured it's good to branch out sometimes.
The Silkworm, Robert Galbraith. The second mystery in the Comoran Strike series is about the publishing industry and the unusual murder of an eccentric author. It was considerably more gruesome than the previous mystery. I started the third in the series, but it was about a serial killer and even more gruesome. Way too much for me! I stopped after the first chapter.
The Collapse of Parenting, Leonard Sax. I heard many, many good things about this book. I don't think a title in the parenting genre has generated so much hype since Bringing Up Bebe. Honestly, I didn't quite see what the big fuss was all about. He makes a lot of great common sense points, but nothing ground breaking. Maybe that's the whole point? With all of my children under five, I'm probably just not the target demographic.
Better than Before, Gretchen Rubin. I love Gretchen's Happier podcast and listen without fail every week, but when this book came out last year, I just couldn't get into it and slogged through the first half. I'm not sure why because I really enjoyed The Happiness Project and Happier At Home. I didn't have data on our trip to Canada and it was the only book already downloaded onto my phone, so I picked it up again while nursing Betsy. I guess I was in the right frame of mind to appreciate it this time, because I quickly flew through the second half of the book. Weird. 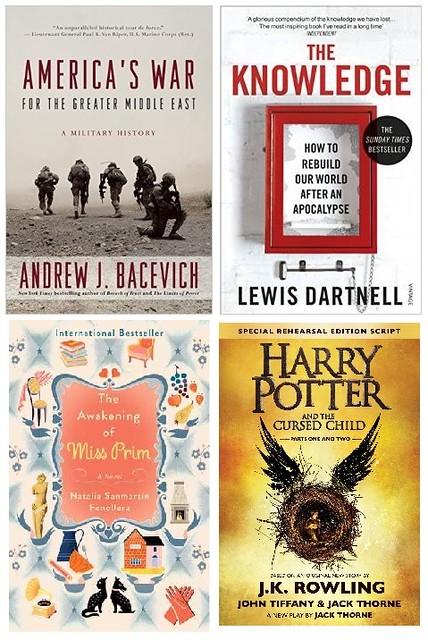 America's War for the Greater Middle East, Andrew Bacevich.
The Knowledge: How to Rebuild Society in the Aftermath of a Cataclysm, Lewis Dartnell.


All I know is that Adam found both of these non-fiction titles fascinating and constantly peppered me with interesting facts while reading them. He spends a lot his down time playing piano, while I spend a lot of my down time feeding a baby, hence the large disparity between us reading-wise this year.

The Awakening of Miss Prim, Natalia Sanmartin Fenollera. This novel was originally published in Spanish, but takes place in a tiny French village. It's part love story, part conversion story, and part treatise on the Benedict Option. So many beautiful passages on marriage and the Catholic faith! We'd both highly recommend it. It's the next Fountain of Carrots book club pick - I can't wait to hear Haley and Christy's insights.
Harry Potter and the Cursed Child: Parts 1 & 2, J.K. Rowling and Jack Thorne. Of course this wasn't as great the original stories, but we found it really fun to slip in the wizarding world again. Since it's a play, we read it aloud together, which is probably a large part of why we enjoyed it as much as we did. We'd definitely love to see the play if it ever comes to Seattle. (I've heard rumors that Hamilton is coming in 2017!)
Read Alouds: 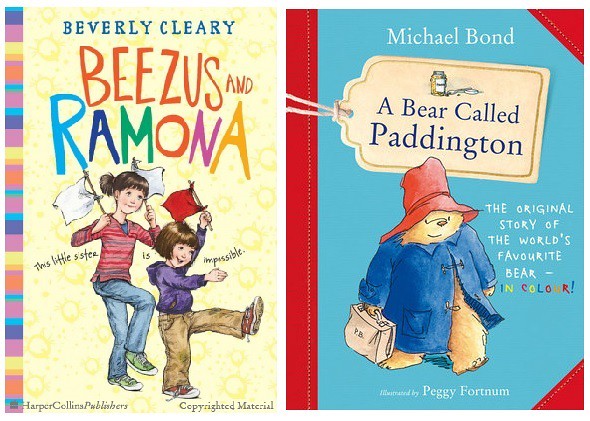 Beezus and Ramona, Beverly Cleary. I read this to the girls while driving to my parents' for Memorial Day weekend. We'd already read the first two books about Ramona, which take place during her kindergarten and first grade years. We went back in time to read this one, which is told from Beezus' point of view when Ramona is in preschool. The next book in the series is about heavier stuff, like her dad getting laid off, so we'll come back to Ramona in a few years.
A Bear Called Paddington, Michael Bond. I read this one aloud while driving to my parents' for the July 4th weekend. Adam and I both missed out on reading Paddington growing up, so we enjoyed the escapades of this little marmalade-loving bear from darkest Peru just as much as our girls did.

Adam read "Gooseberry Park" to the girls before bed each night on our Canada trip. They were sharing a bed for the first time and reading aloud really helped settle them down. He hasn't quite finished that one yet, but next on the docket will be "The Milly Molly Mandy Storybook." 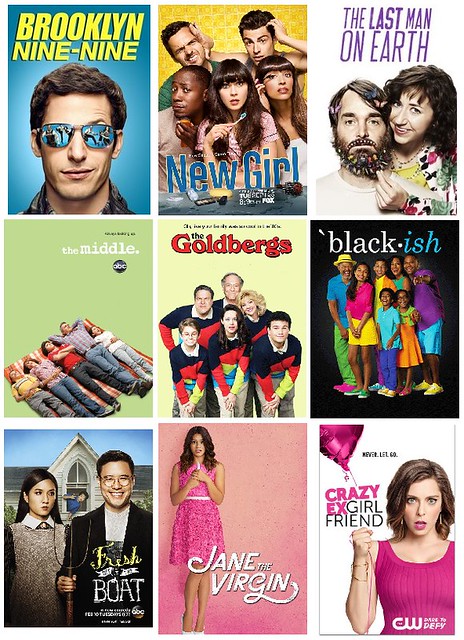 Watching funny shows together at the end of the day just makes us happy. We look forward to new episodes of The Middle and The Goldbergs the most, followed by all the shows on Fox (Brooklyn Nine Nine, New Girl, Last Man on Earth) and then Black-ish and Fresh Off the Boat. Jane The Virgin and Crazy Ex-Girlfriend aren't technically sitcoms (actually one's a telenovela and one's a musical) but they're both absolutely hilarious. This kinda feels like a lot, so I was surprised when I figured out it clocks in at under four hours, which is really just a little more than thirty minutes a day.

We watched the first episode of This is Us. We'll see if we, and by that I mean mostly Adam, stick with it. It's definitely in the Parenthood and Friday Night Lights vein. Adam's really just a comedy kinda guy when it comes to something he'll be tuning into once a week. Any other new shows we should check out?

We're also working our way through past seasons of Madam Secretary on Netflix. We're pretty obsessed. Like every other female in America, I'm really excited about the new Gilmore Girls movies and "The Crown" miniseries on Queen Elizabeth coming out in November.

Have you heard of A Place To Call Home? It's like Downton Abbey, except set in Australia after World War II and it's soooooooooo good. You can watch it through Acorn TV on Amazon. They're airing new episodes in Australia at the moment and I can't wait until the next season is available here. Be forewarned that it will make you look up airfare and fantasize about visiting Australia one day!
Posted by Caitlin at 6:54 PM