Claire and Maggie are nineteen months apart. But Claire's been two for over a month now, which means that we successfully survived having two under two! Here's how: 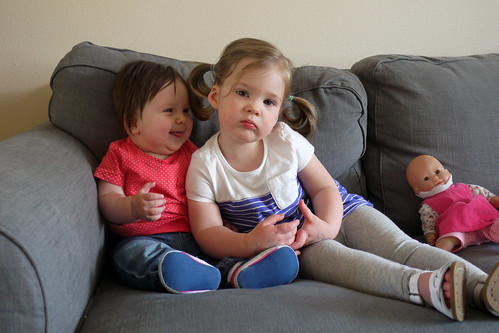 Lots of help. Adam had a month of paternity leave and then we had several visits from generous family and friends. Given that I was recovering from a c-section and couldn't do pretty important things like, um, pick up Claire, this was amazingly helpful. Maggie was born on October 21st and I wasn't really on my own with them until January 2nd.

Freezer meals. I made three weeks' worth of freezer meals before Maggie arrived. Thanks to all of our wonderful visitors, I didn't have to dig into my freezer stash until January. It lasted us until Maggie was three months old and I felt like I was finally getting a handle on things.

Doing stuff at night. I did not try to accomplish anything during the day besides preparing dinner and folding/putting away laundry, which I find to be the easiest chore to accomplish with little people around. We shower at night. We actually wash and dry the laundry at night. We run and empty the dishwasher at night. We even prepare lunches for every solid-food-eating member of the family at night.

Doing stuff on the weekends. When it was just Claire, I tried my best to get all of our chores done during the week so the weekends could be spent on just fun stuff. But that's not going to happen when you're in survival mode. Every Saturday morning, Adam takes Claire on a daddy-daughter date (lately they've been going to a gymnastics class through the community center) and I try to do as much cleaning as possible while Maggie naps. For a while there, they would also do the grocery shopping after church on Sundays. I've added grocery shopping back into our weekday routine now that we've moved into a house with an attached garage. The tricky part before was getting both girls and all the groceries from the car up to our second-floor apartment, often in the pouring rain.

But not getting out of the house too much. It takes a long time to get out of the house in the morning with two babies. I don't like to have to be somewhere by a certain time more than twice a week. Usually it's just play group at church and our little music class. The rest of the week is filled with trips to the grocery store and the library, meeting Daddy for lunch at work, the occasional stop at the indoor playground or children's museum, and now that it's finally warming up - the park. I don't like going to more than one store a day if I can help it. That's a lot of car seat buckling! I also don't like getting into the car more than once a day. If we leave the house again after naps, it's usually just for a walk.

Trying to synchronize afternoon naps. It's not always possible, but my very best days are the ones where I get an hour of baby-free time to do something for myself and get started on dinner. Since this is so often not the case, I try not to focus too much on it happening, but rather on just the idea that I will get to do something for me someway, somehow in the afternoon. If Maggie won't nap, I'll at least get to watch a favorite show. If Claire won't nap, I'll go on a looooong walk with the double stroller to at least enjoy some quiet and perhaps even a phone call to my mom or sister without shouting in the background. I might even decide it's worth getting in the car again and venture out to a fun store like World Market or Marshall's. (Fun stores with shopping carts. Those are key.)

Putting the toddler down for a nap before the baby. When at all possible, I try to put Claire down for her nap before I get Maggie to sleep. There's nothing worse than getting the baby to sleep, reading the toddler stories and getting her all settled, then the baby waking up the very minute you sit down at the computer. Sometimes this means stretching Maggie a bit or putting Claire to bed before she's probably really ready (she's never complained though; just chats to her doll in the crib.) I started reading her pre-nap stories while she eats lunch, which sped up the whole process considerably.

Letting the toddler watch more TV. We let Claire watch one show a day before Maggie arrived, after she woke up from her nap so I could prepare dinner in peace. Since Maggie's arrival, we've bumped it up to two shows a day. At first, Claire was having trouble adjusting to spending more time indoors in the mornings. When it was just her, we could get going a lot quicker and stay out longer. Adding in an extra show in the mornings made things so much easier until she learned how to play independently for a while instead. Now we might do two shows after nap, but there's absolutely no complaining if we turn it off to go outside instead. She has watched movies on days when we were cooped up indoors or if I need her to skip a nap so she'll go to bed earlier (usually the case if we're going out at night, which happens every couple weeks). We pick good quality programming (no Yo Gabba Gabba in the house) and just don't feel bad about it.

Lots of prayer. I'm certainly not great at doing our priest's recommended fifteen minutes of daily mediation without falling asleep or thinking about what's next on my to-do list. But throwing up little prayers throughout the day? That I can do. Prayers of thanksgiving for the gift of fertility and the two amazing blessings I get to spend my days taking care of. Prayers for everyone out there who has it much, much harder than I do - working moms that would love to be at home, those struggling with fertility, those wishing they were married, single parents, parents of multiples, parents of children with illness or disabilities, parents with a spouse who's deployed or traveling constantly or working crazy hours...the list goes on and on. There's nothing like throwing up a prayer for someone else to snap out of a pity party. 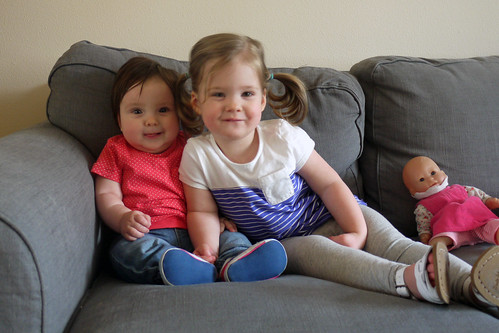 I wouldn't say we thrived necessarily, but we did manage to host Thanksgiving and Christmas dinners as well as throwing parties for Maggie's baptism, Epiphany, and Claire's birthday. Oh, and we also moved, although only five minutes away. Already, things have gotten so much easier. We still don't have a lot of free time, the sheets don't get changed nearly often enough, and dinners are still pretty much thrown together, but we're all getting enough rest and there's a whole lot less crying in the day then there was a few months ago!

P.S. When you have two under two, you will get the "you've got your hands full" comment all the time. I would say at least once or twice a week. I feel like moms tend to get really offended by this? But every time, it seems like the commenter is just trying to say, "you know what, that looks really hard" and I appreciate that!

P.P.S. I loved Grace's posts about two under two and three under three.

P.P.P.S. Lest you think I have it all together, I'm off to scrub crayon scribbles out of the tile floor and playroom walls...
Posted by Caitlin at 5:49 PM