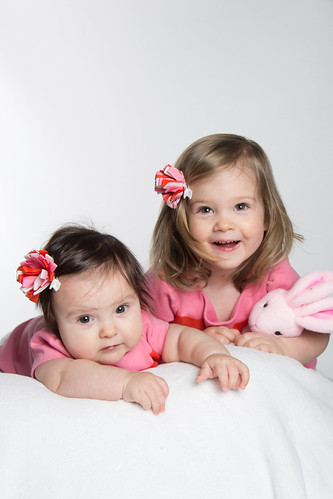 1. We have pretty cute kids, huh? Just like in the fall, our local Janie & Jack store was running a free photo shoot promotion and of course I couldn't resist. This was the best shot of the girls together.

2. My iPhone won't connect to WiFi anymore, so I made an appointment with the Apple store one evening this week. Basically, they erased everything on my phone and then told me I could pay $200 for a new one. But we figured out that it would be cheaper to just add more data to our phone plan until I'm eligible for an upgrade. For some reason the back-up I had done with iTunes didn't work. I lost all my pictures and videos (not a huge deal because they were also on instagram/flickr/youtube) as well as all my contacts and apps. As soon as I got home, I started downloading my favorite apps again, but didn't really think about the contacts. Just goes to show you that phones aren't really for talking on anymore! 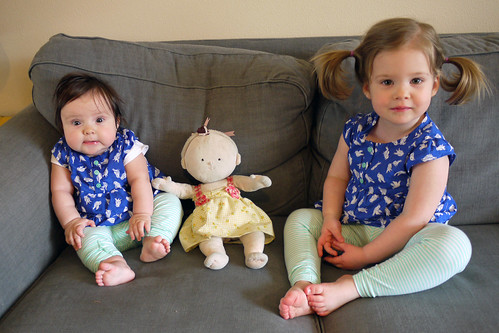 3. I did a little browsing while I was at the mall for the Apple store. First, I noticed that Gymboree had already gotten rid of all their Easter outfits and moved onto the summer stuff. Kind of like how Target put out their Easter candy before Lent even started. Stores don't really pay much attention to the liturgical year, do they? Then I stopped into Barnes & Noble to get a book for Claire's Easter basket. I had been looking on Amazon, but every title I found said that it wouldn't be shipped for one to three weeks. Too risky! On the Easter table at Barnes & Noble, the vast, vast majority of the books had absolutely nothing to do with Jesus' resurrection. They were all about hunting for eggs and eating candy or just generic spring stories about bunnies and chicks. Seriously, the only book that mentioned Jesus was this Berenstain Bears story. A few of the spring stories still had good messages though, so I settle on this one because it seemed the most age appropriate. Sometimes I think if aliens invaded, they would find Christianity really weird, but they would find the secular celebration of Christian holidays waaaaaay weirder.

4. My friend, Rosemary (who has three boys under two, so basically supermom) commented on my post about Maggie's sleep habits early this week. I emailed back and told her that I had never put the girls to bed myself and the very thought terrified me. Guess what? That same day Adam had something come up at work and had to stay late. Of course it was also one of those rare days that both girls were ready for bed at the exact same time. Let's just say that there were lots of prayers thrown up for single parents, parents of multiples, and parents whose spouse has to travel/stay late/work crazy hours on the regular. 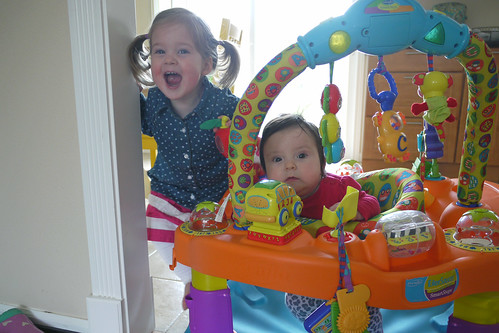 5. Cute things Claire did this week - requested that Adam and I dance together, got crazy excited when he dipped me, requested that I do gymnastics for her, reminded me to wear my glasses while driving, and sang along to Audrey Assad's "I shall not want" from the backseat. I could also make a list of the insane things she's thrown tantrums about this week, but rose-colored glasses, right?

6. Maggie is learning how to sit up! She's almost got it down. I know you're going to want to see a video:

7. Some friends of ours had an extra box of veggies from their CSA and generously offered it to us. So now we have leeks, shallots, fresh ginger, and collard greens. Just a tad more interesting than my normal routine of frozen broccoli/green beans/cauliflower or spinach salad. Do you think Claire will like vichyssoise?

Have a great weekend and a happy Palm Sunday! Go see Jen for more, more, more.
Posted by Caitlin at 6:29 PM