Let's say, theoretically, you just got back from vacation and really need to make a Costco run. But, meeting friends for a kids' concert at the lake sounds way better. So, you dance to some music and wade in the water. After nap time, you stop by the grocery store for a rotisserie chicken, a fresh baguette, and a watermelon (a small one - the big ones are much better deal but you'll never finish it in time.) Since you're already out, you pick up your husband from work.

When y'all get home, he watches the kids while you throw the rest of the baby carrots in a pot with boiling water, a dab of butter, and a squeeze of honey. The carrots cook while you carve the chicken, slice the bread and watermelon, and throw some barbecue sauce and butter on the table. Dinner!

The next day, you finally make that Costco run. When your toddler wakes up from her nap, you get her set up with a snack and an episode of Daniel Tiger. Meanwhile, you add some romaine, spinach, and leftover rotisserie chicken to a big serving bowl. You chop up some pecans and some Comte cheese (which they only have at Costco a few times a year, but when they do you stock up big time and freeze it.) In a separate little bowl, you whisk some salt and pepper into one tablespoon of vinegar. You add three tablespoons of olive oil, then one tablespoon of mayo, and finish with a half teaspoon of curry powder. Since your kids don't like salad (totally understandable at ages two and nine months, respectively) you assemble a deconstructed version on their plates, with pistachios instead of pecans. 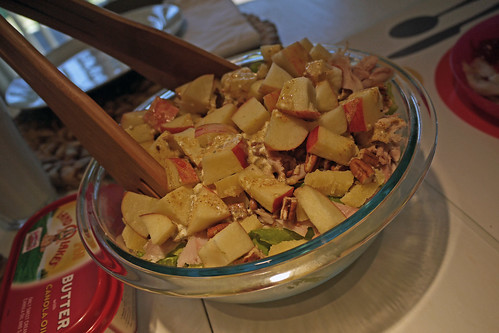 Then, your baby wakes up and you head to the park, texting your husband to meet you there when he gets off the bus. When y'all get home, you pop the rest of the baguette into the oven to warm up. You chop up a couple apples, adding most to the salad but saving a few slices for the kids' plates. Toss the salad with dressing and - dinner! Afterwards everyone enjoys popsicles in the backyard and you really probably should give the kids a bath but you decide it can wait until tomorrow.

You save the rest of rotisserie chicken and put it in the freezer next to some brown rice leftover from the last time you made Korean Beef. Add a couple eggs, some frozen broccoli, baby carrots, and soy sauce and you've got easy dinner number three ready to go. (Oh, and don't forget to have the rest of that watermelon for dessert!)

P.S. This salad recipe is from my absolute favorite cookbook in the whole world, The Bonne Femme Cookbook. If you want to know how real French woman feed their families fresh, healthy and quick meals, this is it. At least based on the five months we spent studying in Provence...
Posted by Caitlin at 5:42 PM