On Thursday and Friday, my parents and Scott drove up to Vancouver to tour UBC, so we were on our own for the first time in almost five weeks! We kicked off the weekend with family movie night at Adam's work. Our main city park has a weekly outdoor movie in the summer months and it sounds like so much fun, but doesn't start until 9:00 pm. Um, definitely not happening for a few more years. This one started at 6:00, a much better time for toddlers. We only made it through the first thirty minutes before Claire asked to go home, but it was fun nonetheless. Whoa, it must have been overstimulating for her - so loud and the Lego Movie had all these crazy colors and flashing lights. I'm surprised Maggie didn't have any problems with it!

Our guests got home after we put the girls to bed and on Saturday morning, we headed to a lavender festival. There's a really famous lavender festival on the Olympic Peninsula that we hope to attend one day, but we just discovered a lavender farm fifteen minutes away from us that has a smaller scale celebration when the flowers are at their peak. It felt like we were back in Provence! The combination of the beautiful view, lovely lavender scent, and live pianist was amazingly calming. 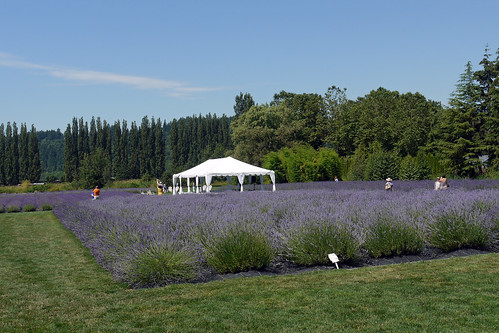 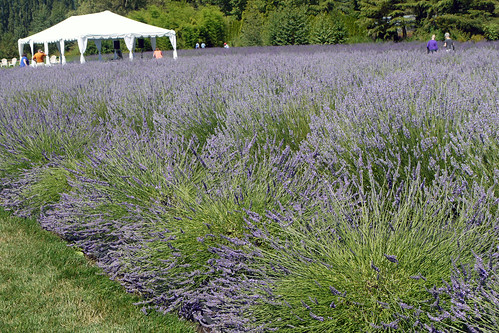 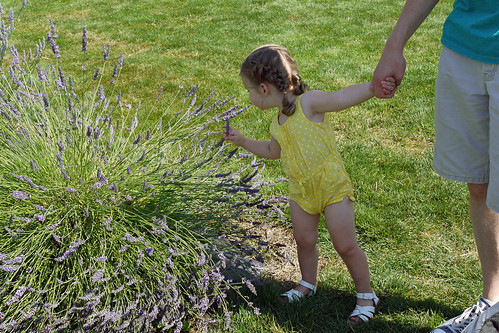 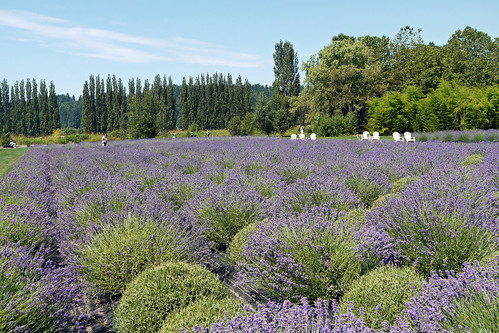 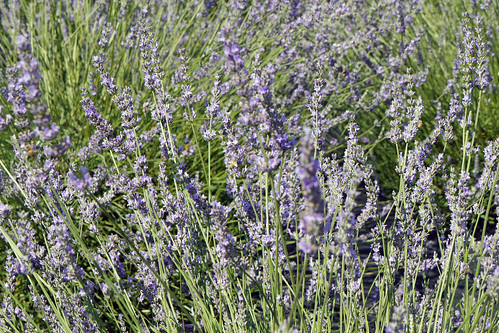 At least, it would have been if we didn't have the world's grumpiest two-year old with us. Claire has been taking forever to fall asleep lately, but still waking up at her normal (early) hour and is therefore more prone to emotional breakdowns than usual. Oh, and her desire to never, ever eat anything for breakfast isn't exactly helping the situation. 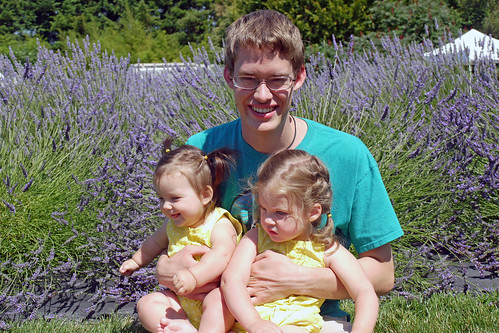 Taking her to a field of beautiful flowers was pretty much torture, apparently. 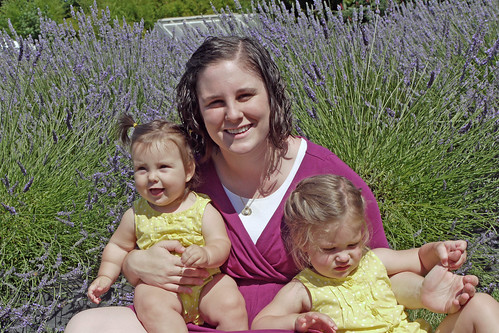 And having to sit on Mommy's lap was even worse. (She's been going through a big Daddy phase lately. It's been a real treat for everyone involved.)

But she did perk up after we got some lunch and chocolate lavender ice cream in her. So much so that when we saw a photographer offering $30 mini portrait sessions, we decided to get some professional shots of the girls in this beautiful setting. Of course, you'll get to see them, don't worry!

Her good mood lasted until she was buckled into her car seat, where she proceeded to freak the heck out until she was immediately whisked to her crib for nap time. But once naps commenced, my mom and I went to get pedicures. And then when the girls were in bed for the night, Adam and I went to the movies! We hadn't been since last summer (we can never justify paying a babysitter to see a movie in theaters, so we usually wait for offers from visiting family) and we saw 22 Jump Street mostly because it was at the right time. It was crude, but also super hilarious.

My parents and Scott left early Sunday morning to tour more colleges and visit family in Ottawa and Houston. Apparently it was now Maggie's turn to be the bearer of bad mood, because she refused to take a morning nap and was super grumpy. It was too late to attend the 9:00 am Mass, but we still had a while before the 11:00 so we decided to do what we always did when Claire wouldn't nap as a baby - go for a drive until she fell asleep in her car seat. Maggie did fall asleep eventually, but as soon as she did, Claire threw up everywhere. (We let her watch a video on my phone, which was obviously a terrible idea for a child prone to carsickness, but sometimes you just get desperate for five minutes of no whining, you know?)

The day ended on a much more positive note, though. We got a babysitter and went to a Sounders game with Adam's department at work. We'd only been to one professional soccer game before (we saw the L'OM in Marseille) so it was really interesting to compare that to the American version. Some things were very different (nice stadium! concession stands!) while others were the same (brass band! supporter section!) and overall it was definitely our favorite major league sports experience. Although the crazy expensive parking and terrible traffic after the game still make it an experience we probably wouldn't pay for ourselves. (The Sounders won by the way - hooray!) 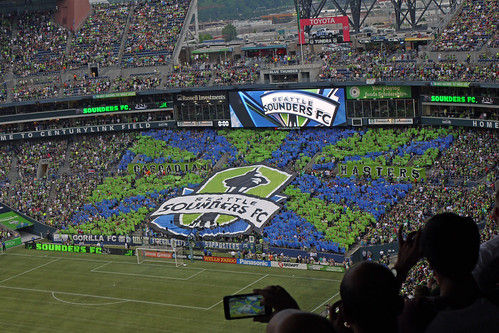 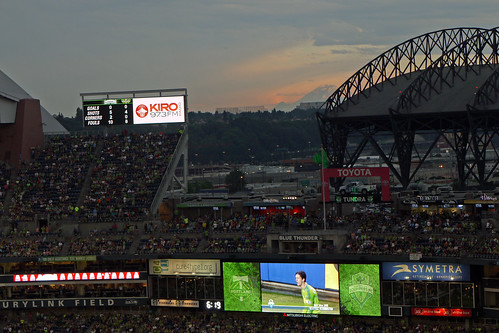 Can you believe that sunset over Mount Rainier? 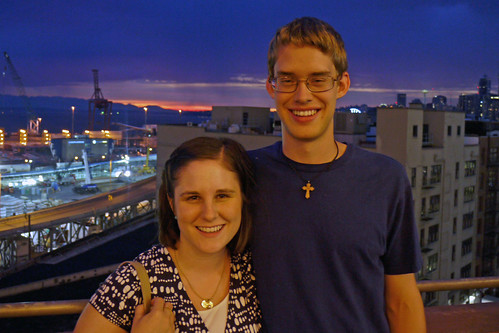 And the sky behind us after the game! Have I mentioned that we really, really love living in Seattle? I don't think I could be happier anywhere else, although I certainly wouldn't mind if Adam got transferred to London for a few years...

Which is not at all likely to happen. But it would be fun, right?

P.S. Claire and Maggie, we still love you! You're just kind of a lot of work sometimes.
Posted by Caitlin at 6:52 PM