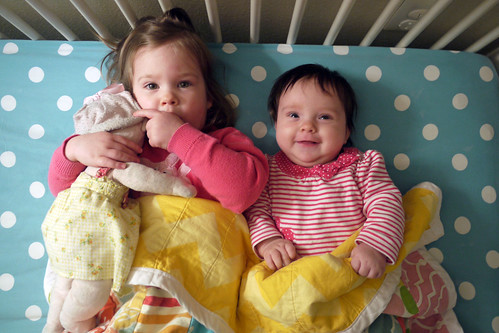 When I bought my ticket to the Edel Gathering in February, I had a three month old and a twenty-three month old. We were cooped up in a tiny apartment in the middle of the winter. I didn't have any stay-at-home mom friends that lived nearby. Far too much of my mental energy was spent trying to get them to take afternoon naps at the same time. We did crazy things like empty the dishwasher at two in the morning, because, well, we were already up, and it was the only time we could squeeze it in.

Roughly six months later, the weekend of the Edel Gathering arrived. Now synchronized afternoon naps (or at least crib confinement, in Claire's case) are a totally normal part of my day. The girls share a room at night, mostly without any problems. I can even leave them playing together for fifteen minutes while I prep dinner or put laundry away! I'm still usually exhausted at the end of the day, but it's because I took a toddler and a baby to the splash park, not just the grocery store across the street. And I'm never so exhausted that I can't help bursting into tears. After lots of persistence and prayer, I finally made some mom friends that are my age and have kids my kids' age. Of course, it also helps that we moved into a much nicer, bigger place and the weather is currently a sunny 75 degrees.

When the time to board the plane to the conference actually came, I didn't really need a break anymore. The weekend away was much loved and much appreciated, that's for sure. But it wasn't crucial to my sanity like just the promise of it was back in February, when I was fully operating in survival mode.

I certainly don't have things all together. I serve either hot dogs or boxed mac & cheese to the girls for dinner once a week. I totally rely on the tv as a babysitter for fifty minutes a day.

The first six months of Claire's life were really, really hard. Then things got easier and pretty much stayed that way until Maggie's arrival, which triggered another six months of chaos. One day, God-willing, we will have another baby and things will be crazy for another half year. We'll find our new normal again and all the sleepless nights will be more than worth it.

Of course, I know I'm fooling myself by thinking Claire and Maggie will be playing so well together at the point that they'll just entertain themselves when a new sibling arrives. 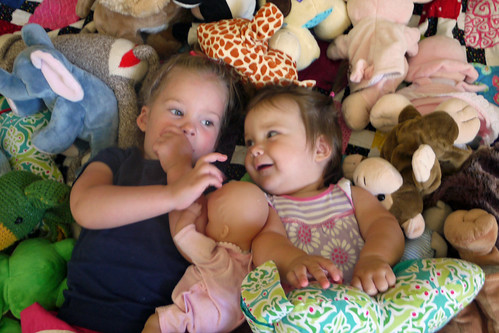 They're never going to fight at all, right? Right?!
Posted by Caitlin at 4:56 PM