Almost a year ago, I decided to make a concerted effort to invest in higher quality clothing in hopes of it lasting longer. Instead of my usual jeans from Old Navy, I bought a a pair of AG jeans on clearance at Anthropologie for about $100.

Nine months later they'd already gotten a hole in the knee. I initially blamed it on the brand and ordered a new pair of skinny jeans on sale at Madewell to try out instead.

But, last week, I noticed that my pair of bootcut Joe's jeans that I'd purchased in August (also about $100) were *this* close to getting a hole in the knee as well.

That was the last straw. Jeans never really fit me that well anyway so I've decided not to wear them anymore. I'll be returning the new ones from Madewell and if I do decide to buy another pair in the future, I'll just be going back to Old Navy.

Apparently paying more does not translate into longer-lasting clothing, at least for me. Maybe I'm particularly hard on clothing? I don't have a lot of clothes, so I wear everything I own quite frequently. So maybe everything just wears out very quickly?

From now on, I'm hoping to stick with dresses and skirts. Dresses, in particular, are my favorite. They're so comfortable and easy to wear! I've been searching Twice, an online consignment store, often lately for dresses that have sleeves and are ideally nursing-friendly.

I'm not nursing at the moment but I hope to be again one day relatively soon, so it makes sense to build a wardrobe of clothing I can wear all the time, you know? I used to find Twice's website pretty exhausting to search through, but I've discovered that I like their mobile app a lot more.

I received six dresses in the mail today. These two, from Land's End and Banana Republic, made the final cut. 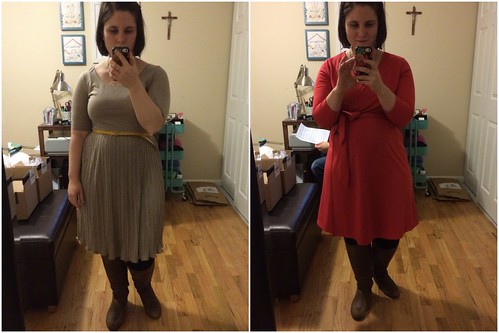 The rejects I'll just drop off at the post office tomorrow. That's the kind of shopping I can handle with a one-year-old and two-year-old in tow!
Posted by Caitlin at 12:19 AM