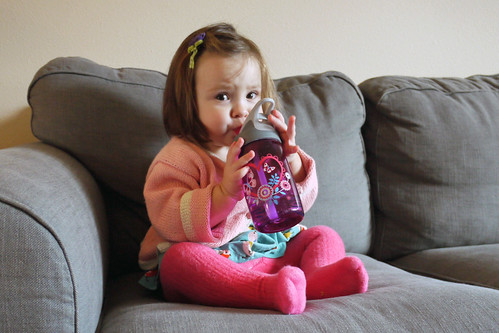 Can walk! She took her first steps at thirteen months, but didn't start walking all the time until fourteen months.

Waves goodbye, shakes her head vigorously to say no, and uses the "all done" sign.

Touches her toes and lifts up her shirt to reveal her belly when asked to identify body parts.

Has four new teeth, bringing the total to eleven. When she cut her molars recently, she finally decided Tylenol isn't the worst thing in the world and stopped fighting it.

Got her first haircut at thirteen months. We're both glad to no longer wage the daily battle over pigtails.

Can climb on the little kid chairs and onto the ledge in front of the fireplace. We've pretty much convinced her to stop climbing into the dishwasher and she desperately wants to climb onto the couch with Claire.

Drinks whole milk from a sippy cup and is no longer nursing, as of last week. She's a pretty adventurous eater. Unlike her sister, she actually enjoys most vegetables. Even Brussels sprouts! But the girl lives for chocolate. After all the candy we had during the Christmas season, she has grown to think every meal should end with a piece.

Can do the stacking rings and make a tower of blocks all by herself. Her favorite thing to do is just hand you stuff. Like pass you all the cutlery out of the dishwasher, one by one. This morning while I was doing my hair, she was slowly handing me all the baby facecloths.

Loves to dance and tries her hardest to sing along to "Let it Go" with Claire. She really enjoys dressing up, something Claire knew nothing about at her age. In particular, she's a big fan of necklaces and sunglasses. She wants so badly to fit into the fancy dress-up shoes and gets quite frustrated when they won't stay on her little feet.

Transitioned to just an afternoon nap around eleven months and finally stopped waking up once per night around fourteen months. We're really trying to be firm about limiting the pacifier to just sleep.

Loves to read. She's a big fan of lift-the-flap books but her absolute favorite of the moment is Goodnight Gorilla. She's not as into watching TV as Claire was at her age, but that's probably because we're usually watching Daniel Tiger instead of Curious George.

Has already picked up on so much pretend play from her big sister, like feeding bottles to her beloved dolly.

Keeps falling asleep in the car on the way home from our morning outings. Most of the time I can successfully transfer her into the crib, but when I'm not so lucky, she won't go back down. One of my least favorite parts of this stage.

Knows how to throw a mean tantrum, usually about getting dressed, and sometimes just walks around whining in the exact right pitch to drive us insane. The other least favorite parts of this stage...

Isn't much of a kisser, but will snuggle in for a big hug when asked. It's the sweetest thing and instantly makes up for any nap refusal, tantrums, whining, and general toddler antics. 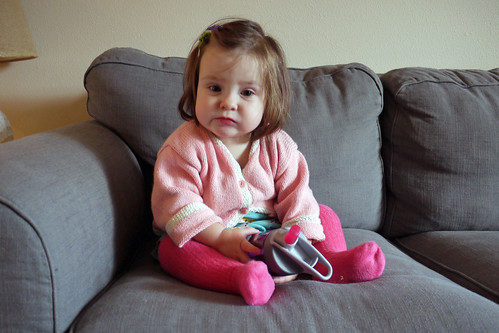 P.S. Here are the rest of Maggie's monthly reports!
Posted by Caitlin at 5:02 PM