My sister, Allison, arrived last Thursday, the day before Claire's birthday. We played and had lunch at IKEA, picked her up at the airport, put the girls down for naps, and made her birthday cake. It was such a beautiful day that after dinner we had to go down to the waterfront for birthday eve gelato. Once the girls were in bed, Allie frosted the cake while I assembled a veggie tray and some fruit skewers. 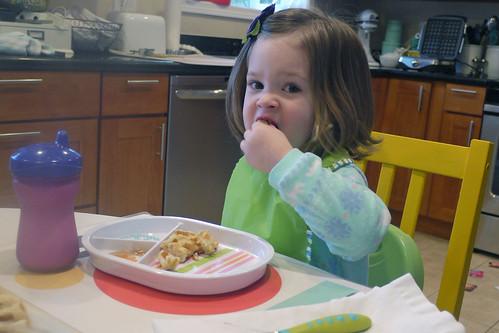 The next morning we had waffles for breakfast, the birthday girl's favorite, and opened presents before Adam left for work. She unwrapped a suitcase set and a couple new books from us as well as a play toaster and mixer from my parents. Allie gave her some more books and the cutest Peppa Pig bows and Frozen crowns. 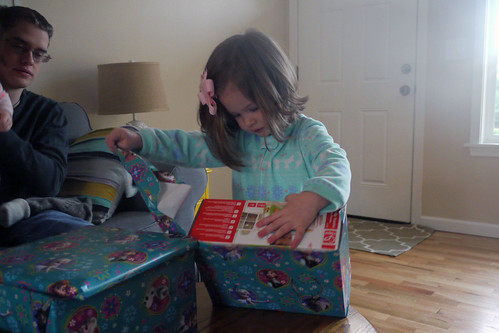 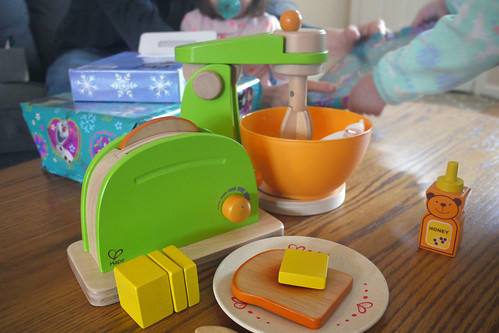 We spent the morning at the park, had lunch, and set up for her party while the girls were napping. It was very loosely Frozen themed at Claire's insistence. Except she's never been to a themed party before, so she doesn't know how over-the-top you could get! 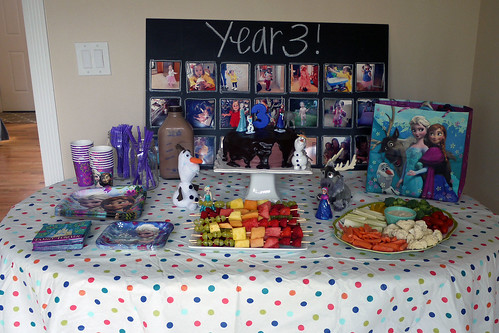 In the kitchen, we used a polka dot tablecloth from Goodwill and scrap piece of chalkboard displaying Instagram shots from the past year. We had Frozen plates, cups, and napkins of course and borrowed a few of her Frozen toys as decorations. The Frozen gift bag held the favors. 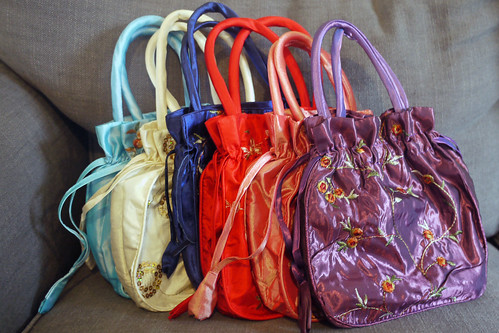 My mom found a bunch of these little purses in China. 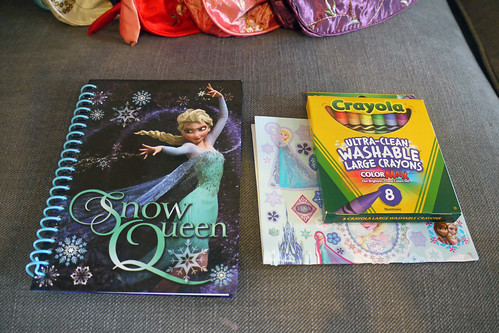 And inside we put Frozen notebooks and stickers (from the Target dollar spot) as well as a pack of crayons. 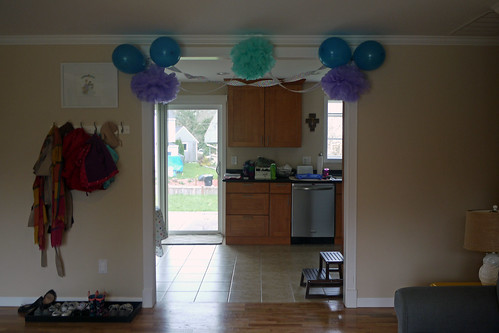 In the living room, we decorated with some crepe paper, pompoms, and balloons. 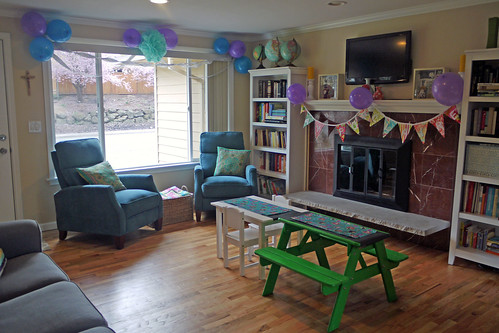 We brought in the craft table from the playroom and the picnic table from outside, adorned with a little leftover Frozen wrapping paper as table runners. 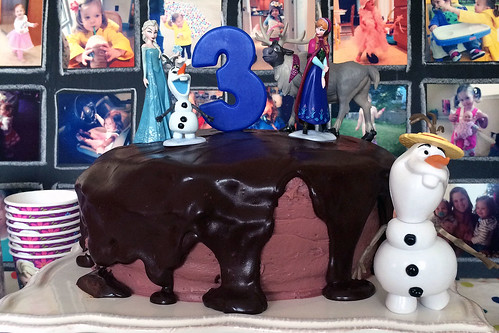 The cake was chocolate with purple icing and chocolate ganache. We just stuck some Frozen figurines on top and called it good. 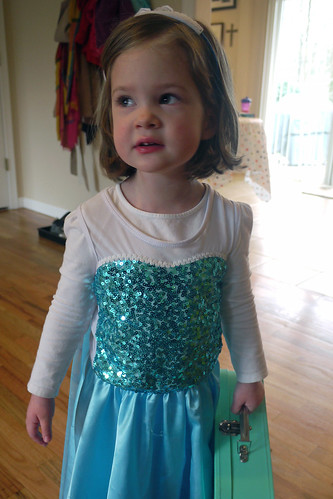 When the girls woke up, they had to change into the Frozen dresses before the guests arrived. We invited four other little girls to join us - all between the ages of one and three.  We played for a while and then sat down to an early dinner of take-out pizza, fruit, veggies, and chocolate milk. 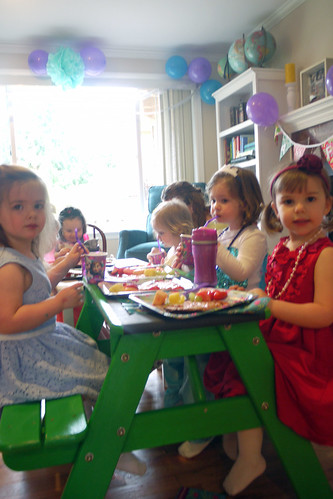 After dinner, it was time for presents. 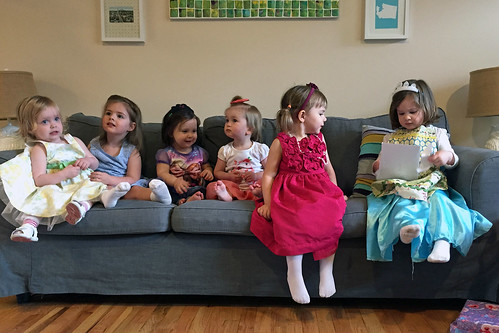 Giving each other kisses! Pure sweetness. 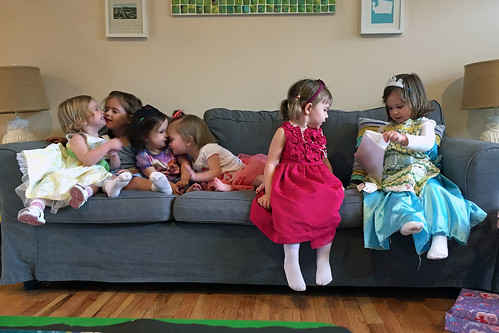 And finally, we brought out the cake. 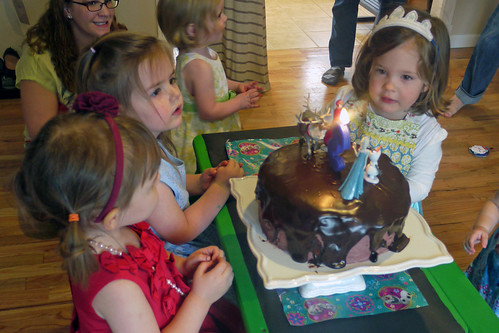 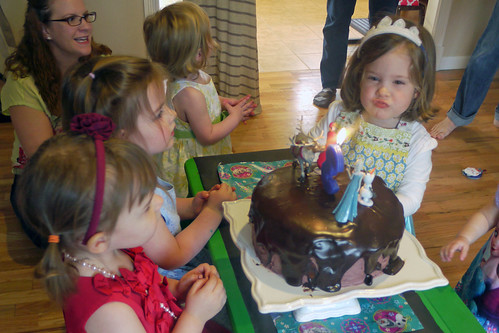 Once our guests left, Claire and Maggie went straight into the bath (during which they Skyped with the grandparents) and the cake crumbs scattered everywhere were vacuumed up. Just like that, our first themed/friend birthday party was in the books!
Posted by Caitlin at 6:15 PM