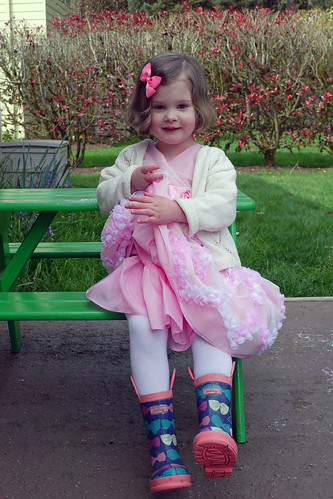 Can sing her ABCs and count to ten. She can still gets stuck around thirteen or fourteen when counting to twenty. She can recognize probably five or six letters. If she's not in the mood to work on these things, she'll just start spouting nonsense. Like, "Claire, what letter is that?" "Um, dumbia!"

Almost has the hang of twenty-four piece puzzles and is starting to draw recognizable shapes. Adam just taught her how to draw smiley faces.

Knows her and Maggie's full names, including that Maggie's "real name" is Margaret, conveniently just like Daniel Tiger's little sister.

Understands the anatomical differences between boys and girls and knows the proper names for them. Although she thinks its hilarious to point out my "big nipples" she knows they're for feeding babies. She still gets pronouns like he, she, his, and her confused.

Is getting pretty good at the sign of the cross and often has to remind me to say grace at lunchtime, when Adam's not home. She's very well-behaved at Mass and loves to shake Father's hand afterward. However, she has been quite frustrating during bedtime prayers. For years we used to read out of the Magnificat prayer books, but it slowly turned into a power struggle. Now we've been having her kneel with us in front of our family altar but of course she would prefer to be rolling around on the ground instead.

Loves listening to the Frozen soundtrack in the car. We've had it on non-stop since October and every car ride has to start with "Let it Go." At Christmas, she picked up lots of carols. Her favorite is "Angels We Have Heard on High." We still hear her singing it almost daily.

Made the transition to a toddler bed (aka her crib with the side off) this past week. She came out a few times the first couple nights, but so far it's gone really well. She doesn't nap very often anymore - maybe once or twice a week. I actually prefer the days without naps because she's so good about doing quiet time instead and then falls asleep really easily at night.

Still sucks her thumb and insists on having her beloved dolly at her side constantly.

Is getting better at kicking and throwing balls. She's never met a play structure she couldn't handle, but she still insists on sitting in a baby swing.

Hates loud noises, even the vacuum and the blender. And especially Maggie screaming.

Watches usually one, sometimes two shows a day. After a long, long streak of Daniel Tiger, she's suddenly switched her allegiance to Franklin. She still loves Peppa Pig, but we've finally broken the habit of watching a few of the five minute episodes while we're getting ready in the morning. She probably watches a movie once a month - Winnie the Pooh, Cinderella, Tangled, or Frozen, naturally.

Has quite a long attention span for stories. Some of her recent favorites have been "The Book With No Pictures," "The Princess and the Pig" and "If You Give a Mouse a Cookie." We've been listening to audiobooks during lunch (so far Robert Munsch stories and Winnie the Pooh) and she really seems to be getting them.

Usually eats toast with butter and scrambled eggs for breakfast and cheese, ham and crackers for lunch. She's gotten more picky in regards to fresh produce - now she'll pretty much only eat apples and carrots. But she's gotten a little less picky in other ways - she'll eat any type of meat and finally has nothing against pb&j.

Would wear dresses and skirts everyday if she could. And she pretty much gets her way. She's almost dressing herself completely. There are some things she is very insist on, particularly putting on her shoes and coat. She's not potty-trained yet. We haven't done much since our failed attempt at two and a half. She doesn't have to be potty-trained until Catechesis starts in September and I thought it would be easier in the summer. We're planning to go diaper-free after our vacation in May.

After a really good streak, she's gotten carsick twice in the last two months. Now that she's older, it makes an even bigger mess and is so much grosser. Also about once a month, she holds her breath when she gets upset and passes out.

Scrunches up her face in the most hilarious and frustrating manner when asked to smile for a picture.

Saw her first ballet, Snow White, and her movie in theaters, Cinderella, in March.

Loves her little sister. They don't always get along perfectly, but the moments when we hear Claire exclaim, "Maggie, come on! Let's play!" and hear them running down the hallway together bring so much joy to our hearts. 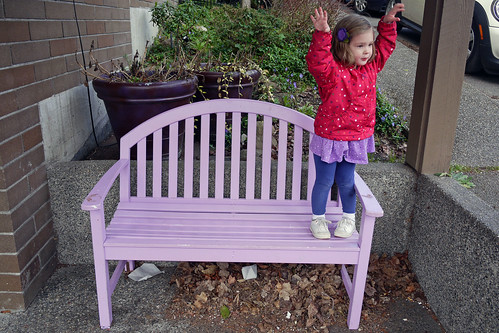 I can't believe this sweet girl is three already!
Posted by Caitlin at 6:01 PM