Now that I'm not nursing anymore, I've had a harder time fitting reading into the day. Adam is actually beating me so far this year for the first time ever! 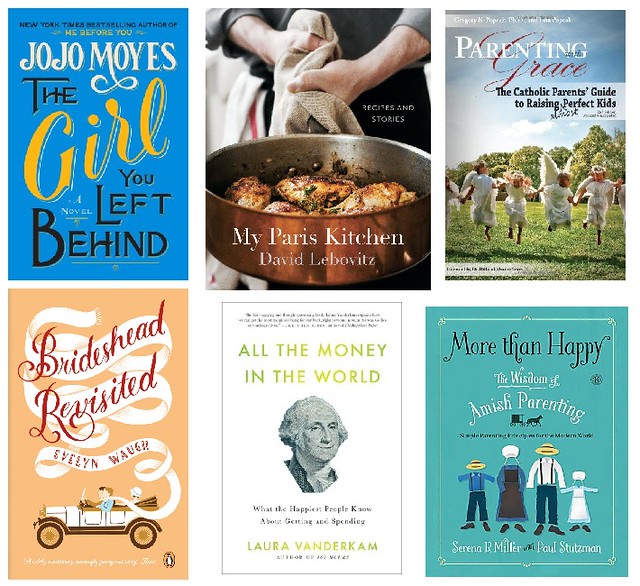 The Girl You Left Behind, JoJo Moyes. About a court battle over a painting that disappeared from a hotel in rural France during the first world war. The question is: was it stolen or was it a gift? A good book to read before seeing Helen Mirren's new film, The Woman in Gold.

My Paris Kitchen, David Lebovitz. It's technically a cookbook, but there are quite a few essays about life and food in Paris interspersed throughout. Our semester in France was five years ago this spring and this was the perfect read for reminiscing about all the glorious food we enjoyed there.

Parenting With Grace, Greg and Lisa Popcak. This was our first pick of the year for our mom's book club at church. A couple members suggested it and we chose it because the authors spoke at our parish conference in November. The problem is that it's very attachment-parenting minded. The members of our group that practice that style of parenting were at home co-sleeping with their babies while the rest of us had some disgruntled discussions about the book's judgmental tone.

Brideshead Revisited, Evelyn Waugh. Adam and I read this aloud together this winter. Accompanied by hot cocoa and shortbread, it was the perfect evening activity. We loved reading and discussing it together - it's such a rich, fascinating story. We plan to watch the miniseries this summer.

All the Money in the World, Laura Vanderkam. This isn't a traditional personal finance book. It's about the intersection of money and happiness. It led to some interesting conversations with Adam, like what we would change if we all of sudden came into extra money - hiring a house cleaner and lawn guy!

More Than Happy: The Wisdom of Amish Parenting, Serena Miller. This a sweet book exploring how and why Amish children seem to be so well-behaved. They certainly have a lot more chores than the average American child and, of course, have access to a lot less technology. The secrets of their success seem to mostly boil down to their religion's emphasis on humility. 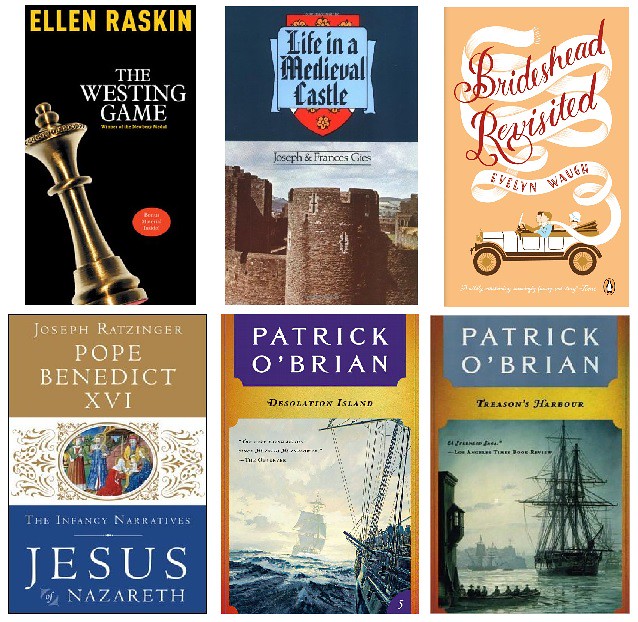 The Westing Game, Ellen Raskin. Somehow, Adam completely missed reading this and The Princess Bride in seventh grade, so he rectified the situation this winter. I don't think the mystery was quite as intriguing as it would have been at age twelve, but it was still a fun, quick read.

Life in a Medieval Castle, Joseph and Frances Gies. Adam has something of a fascination with medieval culture. He also read "Cathedral, Forge, and Water Wheel" and is currently reading "Marriage and Family in the Middle Ages" both by the same authors.

Jesus of Nazareth: The Infancy Narratives, Joseph Ratzinger. This was his adoration companion for a couple months. Pope Benedict is such a wonderful writer! And, as I already mentioned, we read Brideshead Revisited aloud together.

Aubrey-Maturin Series, Patrick O'Brian. He's still plugging away at this series about the British Navy during the Napoleonic Wars. He's on book ten now, which is the novel the Russell Crowe movie was based on. 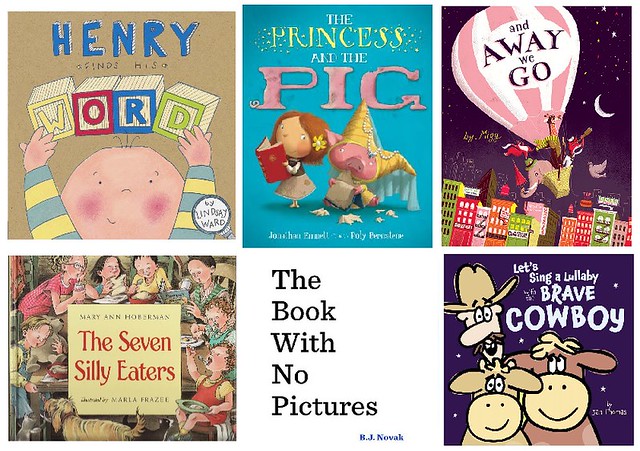 Henry Finds His Word, Lindsay Ward. About a baby on his quest to find his first word. The ending is both touching and hilarious. Both Claire and Maggie enjoyed this one.

The Princess and the Pig, Jonathan Emmett. A piglet and a princess are switched at birth and hijinks ensue, poking fun at many traditional fairy tales in the process.

And Away We Go, Migy. A beautifully illustrated tale about a fox's attempt to fly to the moon in a hot air balloon. He's joined by many animal friends in the process. Another read that both Claire and Maggie enjoyed. Maggie loves to chime in with "go!" at the end of each page.

The Seven Silly Eater, Mary Ann Hoberman. A family of seven children, each of whom are so picky they'll only eat one food item, conspire to make their sainted mother breakfast in bed for her birthday.

The Book With No Pictures, B.J. Novak. A tremendously silly story about how adults must read whatever words are on the page, no matter what. A rare book that actually inspired Claire to collapse in a fit of giggles after hearing me reading the page of crazy noises.

Let's Sing a Lullaby with the Brave Cowboy, Jan Thomas. A cowboy is singing a lullaby to his cows before bed, but keeps interrupting because he sees strange things in the dark. Of course, not all is as it seems! Another one that both girls enjoyed.


I'm so glad reading is something our whole family enjoys. This morning the girls sat quietly and looked at picture books while I got ready for the day. That's certainly not the norm, but, oh, it was such a happy sight!
Posted by Caitlin at 6:14 PM