Last post about our vacation, I promise! I couldn't help chiming in with a few comments. 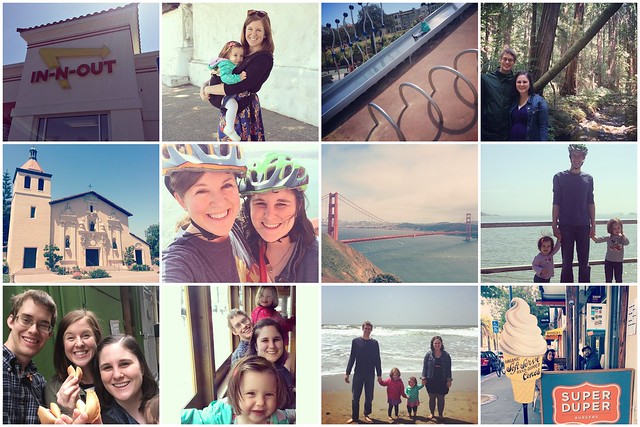 - Starting off on kind of a bummer, I wanted to share our experience with Airbnb. We used the site for the first time last summer in Ottawa and Montreal.  We paid $150 a night for two-bedroom apartments in great locations. So, when we decided on a trip to San Francisco, we knew we'd used Airbnb again. In January, we booked a two-bedroom apartment near Golden Gate Park for $200 a night. But in March, the owners canceled our stay because their home was being foreclosed on. We had to find a new place six weeks before our visit! Of course, anything nice in the same price range was already booked. We finally settled on a $400 per night apartment. Even though Airbnb gave us a $300 credit, we still ended up paying $1,000 more than we originally budgeted for.

- So, I guess that's the risk you take with Airbnb. We still spent less than we would have on a hotel in a similar area. Apartments are so, so much nicer than hotels with small children. We love having multiple bedrooms and bathrooms, access to laundry, and being able to cook meals at home. We only ate one meal out each day, which not only saved money but was just a lot less stressful with toddlers.


- We mostly ate dinner at home, except for the two days we had picnic lunches and then ate out in the evening. It can be tricky cooking meals on vacation because you want to use up all your groceries before leaving. We had frozen pizza, ravioli, rotisserie chicken, quesadillas with the leftover chicken, and a Trader Joe's stir fry. For breakfast, we just had our usual scrambled eggs and toast.


- Our apartment had a queen bed in each room. Maggie slept with us in a pack-n-play the hosts generously provided and Claire slept with Allie on this toddler air mattress. It was perfect! We also brought these high chairs. We just pack them in with our car seat travel bags. We didn't bring our double stroller, mainly because there's no way we could have fit it and suitcases in the trunk of our rental car. We used our smaller umbrella stroller and the Ergo instead, which was also better for riding public transit and city life in general.


- I love planning itineraries for vacations. Our favorite day was biking the Golden Gate Bridge, followed by Muir Woods and the Marin Headlands. Probably our least favorite was the Silicon Valley day trip just because it involved so much driving. We contemplated doing a day trip to Monterrey instead (to see the aquarium and the mission where Bl. Junipero Serra is buried) but it was just too far with little kids and Bay Area traffic.  We definitely could have condensed our day in the Mission District (just the basilica, Ike's sandwiches, Dolores Park, and Bi-Rite Creamery) and our day downtown (take cable car from Union Square to North Beach, walk through Little Italy and Chinatown, eat lunch at the Ferry Building) and add something else to the afternoon. If you were already at the Ferry Building, you could take the tour of Alcatraz. (We didn't think that would go over well with toddlers.) Another great afternoon activity would be Baker Beach.

- Overall, this was a really fun trip because it was a great mix of relaxing and feeling like we saw a lot of stuff. The flights were so easy and we were home early evening to enjoy the luxuries of cable television.  All in one week, we saw the city, forest, beach, lots of pretty churches, ate lots of great food, and rode bikes, buses, and cable cars.

- When we started talking about taking a real just-for-vacation to celebrate five years of marriage, we originally thought of Hawaii or an Alaskan cruise. We decided on San Francisco because it was more cost-effective, but of course that ended up not being the case after our Airbnb situation. Still, we have no regrets!
Posted by Caitlin at 11:34 AM