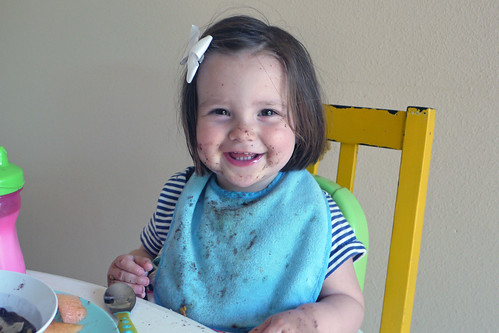 Talks way, way more than Claire did at her age. She must know over a hundred words. She talks in full sentences, saying things like "Help me put this on!" and "I hurt myself!"

Blows on things that are hot and shivers when we talk about being cold. She can fake cough and sneeze and thinks pretending to sleep, complete with snoring, is hilarious. She can blow her nose and is very good about smiling and hamming it up for the camera, while her big sister usually has no interest in posing.

Makes the sign of the cross by waving her hand up and down frantically. We used to read prayer board books when Claire was this age, but now we pray in front of the family altar before bed. If only one parent is reading stories, she will run to find the other when it's time to pray and obediently kneel. She loves to get holy water from the font before and after Mass and shake hands with everyone during the sign of the peace. She definitely has worse Mass behavior than Claire did at this age and still has to be taken out occasionally because she won't stop screaming.

Has been greatly improving her gross motor skills since the weather's warmed up and we've started visiting the playground frequently. She's finally figured out how to go down slides without flying off at the bottom. She tries so hard to climb everything Claire does! She's nowhere near as obsessed with the swings as Claire was at her age though.

Has gotten a lot more comfortable with water from a few months ago. Dipping her toes in the ocean during our San Francisco trip scared her a little bit - she insisted every body of water was too cold afterwards! Unsurprisingly, she was perfectly happy to just watch at Claire's swimming lessons. After going more frequently, she's now really comfortable with the lake and the pool, although she doesn't enjoy them as much as her big sister.

Likes to draw, paint, and do play dough, although of course her attention span is nowhere near that of Claire's. She's finally stopped tasting art supplies, but she definitely can't be trusted with them unsupervised. She egged Claire into coloring all over the door to the garage last month! Her favorite color is pink, mostly because that's what Claire has decreed and Maggie is happy to go along with it.

Does more imaginative play. She likes to pretend to change her baby's diaper and give her a bottle. She's gotten a lot more into the play kitchen and making pretend meals. She's always talking on pretend phones, shouting "Hello?! Bye bye!" She loves dress up clothes, thanks to her big sister's encouragement, and her favorite stuffed animal is a little dog she loves to "take for walks." She can do the shape sorter and build a mean block tower, but she hasn't had much exposure to puzzles yet.

Always has to be in the bathroom when Claire is using the potty. She happily takes over the jobs of handing Claire toilet paper and flushing. She's also obsessed with sitting on the potty herself and exclaiming, "I peed! I did it!" all while fully clothed in a diaper. We have no intentions of actually potty training her anytime soon though - next summer should be perfect.

Doesn't hold her breath and pass out like Claire, but she can throw a pretty impressive tantrum. Changing her clothes and buckling her into the car seat are almost guaranteed to result in a screaming fit. Washing her hair in the bath or refusing to let her sit on the counter while you get ready in the morning can usually cause a meltdown too.

Is developing a longer attention span for stories. We're still reading board books at nap time, but before bed we read the girls stories together, so we look for shorter picture books that will hold Maggie's attention like Owl Babies and Chicka Chicka Boom Boom. She frequently reads stories aloud to herself, which is just the cutest thing ever. It's usually The Wheels on the Bus or a Frozen board book, which is read as "Queen Elsa...Queen Elsa...Queen Elsa...The End."

Loves most vegetables, particularly broccoli, but isn't a huge fan of meat. She usually has toast, yogurt, or granola for breakfast. She mostly has cheese, ham, and crackers for lunch. She always eats the smallest amount at dinner, often just the veggies, fruit, and bread. She's not great about using cutlery. She'll hold a spoon or fork in one hand while finger feeding herself with the other. She still loves chocolate in all forms, particularly chocolate ice cream, but most other desserts don't really interest her.

Only got carsick once so far, on some particularly windy roads in San Francisco. We were all feeling queasy on that car ride! I think it's safe to say she's escaped the car sickness gene Claire unfortunately inherited.

Sleeps more like ten hours a night since she's started sharing a room with Claire. They keep each other up later or wake each other up earlier. As long as we're home, she always naps for at least two hours in the afternoon. She still falls asleep in the car on the way back from outings quite frequently, but easily transfers into her pack-n-play. She doesn't use sleep sacks anymore, preferring her quilt instead. She always has her special doll and a pacifier. We're doing our best to keep the pacifier just for sleep, but it's very easy to backslide and give in when she's in a whiny mood.

Wakes up from her afternoon nap requesting milk, cookies (Fig Newtons) and a show. The girls' favorites are Daniel Tiger, Franklin, Madeline, and Peppa Pig. They're both obsessed with Frozen (Claire pretending to be Elsa and Maggie pretending to be Anna) so that's a good once-a-month treat for when I need a 90-minute block of time to finish chores.

Sings "Twinkle, Twinkle Little Star", the ABCs, "Doe a Deer" and "Angels We Have Heard on High" quite frequently. Both girls know almost all the words to Regina Caeli, which we sing after they're tucked into bed every night.

Is way more outgoing and pretty much over her stranger anxiety. She just follows Claire right into the childcare room at the gym and doesn't look back. She hasn't cried the last two times we've hired a babysitter. She's started to get the concept of friends and will talk about everybody she knows at playgroup. She often says goodbye to all nearby strangers as we leave a store or restaurant. She follows Claire's lead giving their music teacher a hug or shaking hands with our priest.

Just adores her big sister. She is always repeating what Claire says and trying to do whatever she's doing. I love seeing them hold hands, sit as close as humanly possible on the couch, and giggle together in their room. Of course, she also loves having all the attention to herself every once in a while! 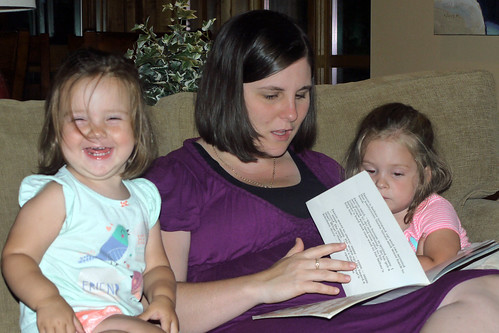 Oh, how we love this happy little girl.
Posted by Caitlin at 6:16 PM