Because I like to hope that other people are as nosy as I am! 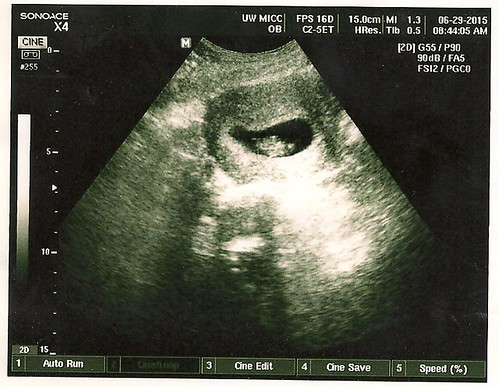 How far along are you? When are you due?

I'm fourteen weeks along and due on February 1st.


How far apart in age will this little one be from Claire and Maggie?
Maggie will be two years and three months old. Claire will turn four about six weeks later. They'll all be two grades apart in school.
How did you know you were ready to try again?

Since Maggie was born via c-section, we were instructed to wait eighteen months before trying to conceive again. The eighteen months mark was April 21st, which is why we timed our San Francisco vacation for the first week of May, when we knew I wouldn't be pregnant yet. Eighteen months was the longest we've had to avoid in our five years of marriage so we were more than ready to throw caution to the wind, especially because we'd also hit a pretty good groove with the girls.
Isn't NFP super confusing after having a baby?

Yep! And since we really needed to avoid for health reasons, we abstained completely for eight months until my cycles were back to normal. After that, we used the Marquette Method, which we've found to be really easy and work really well for us. The biggest downside people often mention for Marquette is the cost, but our HSA pays for the monitor and test sticks.

When did you find out?

On my birthday! I turned twenty-six on May 26th. A new baby was the best golden birthday present I could have hoped for. We were originally going to wait a while to tell Claire, but we were just so happy we told her the same day. I've loved seeing her excitement for another sibling. 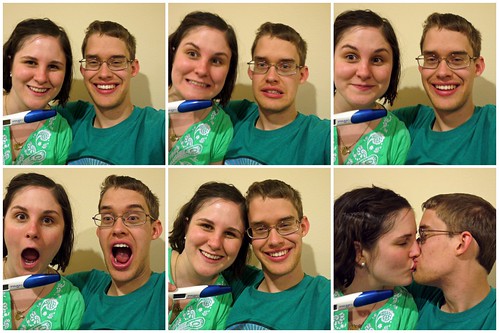 Will you have to have another c-section?
Hopefully not. The American College of Obstetrics has ruled that VBACs after two c-sections are actually safer than having a third c-section. Unfortunately, most hospitals have not changed their policies yet. Instead of going to the suburban hospital where we had Maggie, we'll be having this baby at the university research hospital. But I like my new OB much more than the one that delivered Maggie, so I'm really happy about the change.
Because it's risky to induce a woman who's had previous c-sections, I'll have a c-section scheduled at 41 weeks. As long as I don't have any weird complications like my last two pregnancies and go into labor naturally before I'm a week overdue, a VBAC is a definite possibility.

What sort of complications did you have with Claire and Maggie?
With Claire, I had a placental abruption at 36 weeks, which meant an emergency c-section and a two-week NICU stay. With Maggie, they diagnosed her with Intrauterine Growth Syndrome and moved up my scheduled c-section to my due date. Turns out she was a perfectly healthy eight pounds though and the c-section was completely unnecessary.


Why do you care about trying for a VBAC again?
Well, I would love to avoid another major abdominal surgery, for starters. I also really want to know what it's like to be in labor and to be the first person to hold my baby. Most importantly, though, I don't want my family size to be limited at age 26. It certainly wouldn't be my preference to be done having kids by age 30 and spend the next fifteen years avoiding!

Every Catholic person I've mentioned that to has brought up anecdotal evidence of someone they know who's had seven or eight c-sections. But even Pope Francis said that's a bad idea and I think I'd have to side with him on that one. I've already seen firsthand what happens when things go terribly wrong in pregnancy and I wouldn't choose to risk that again.

Obviously, if I end up with a third c-section, it will not be the end of the world. Life will go on and life will be great, although considerably less sexy. I'm so grateful that Claire and I are both alive and healthy and that I've been entrusted with two more beautiful souls. 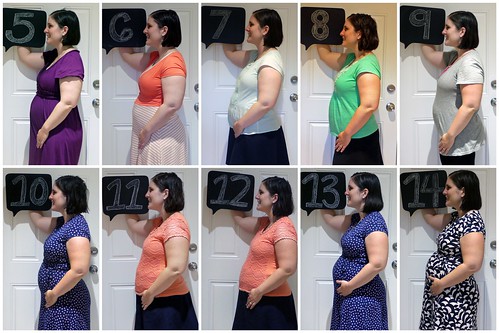 How was the first trimester?
It wasn't great, but I really didn't have much to complain about. Adam has really flexible hours as a software developer and generously let me sleep in every morning. While my dad was on a business trip, my mom stayed with us for two weeks. She was so incredibly kind about making dinner and doing laundry. After she left, my sister came to visit and has been just as wonderful. Before I knew it, the six weeks of nausea were over and I had to get back to waking up with an alarm every morning.

Of course, by the third time around, I pretty much started showing immediately. So that's been fun.

Are you planning to find out the gender this time?
Yes! We kept it a surprise with Claire, which was the most anti-climatic gender reveal ever because the doctors were a little busy saving her life. We found out at twenty weeks with Maggie and really felt like we got to bond with her more, so we'll be going that route again. I can't wait to know if we'll be shaking things up with a boy or solidifying our stance as a girl family.
Are you worried about transitioning to three kids?
I've heard many parents mention two to three kids was their hardest transition, so I can't help worrying a little. I think the logistics of managing three kids out of the house will definitely be harder. I'll have to go into the backseat of the van to buckle a car seat. Not everyone will fit in the cart or the stroller anymore. I'll have more kids than hands!

But, Claire and Maggie also play really well together now and Maggie will be nine months older than Claire was when we welcomed a younger sibling. I also feel like I have a decent amount of baby knowledge at this point. I know what works well for us during the postpartum period and about how long to expect it to take for us to reach a new normal. 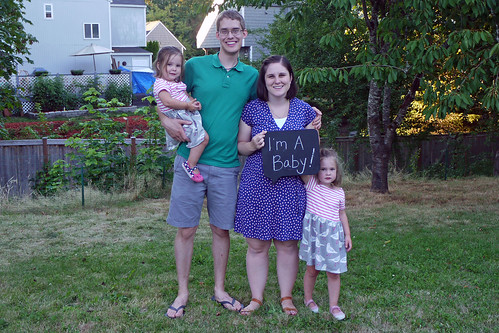 At the very least, I know that our babies are the cutest and that I can't wait to have another to snuggle!

P.S. The lovely Kate of Sancta Nomina, graciously did a name consult for us, which is up on her site today. If you'd like to see what we're thinking so far and chime in with your thoughts, hop on over!
Posted by Caitlin at 7:02 PM