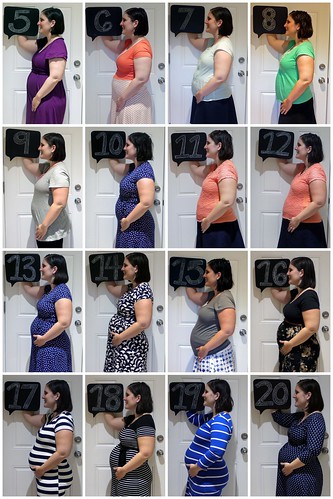 We're halfway there! This pregnancy has been really great so far. I'm lucky to have relatively minor nausea and exhaustion during the first trimester. Now that I've moved into the second, there are days when my hips feel like they're being forced apart and my heartburn has already returned a few times already - only when I have pizza or chocolate chips cookies. Why?! But now I've got the added bonus of feeling the baby move! Definitely the most exciting part of pregnancy. I didn't really start feeling kicks until week nineteen and Adam was able to feel some too last night.

Another pregnancy bonus: the perfect excuse to shop for new clothes. I haven't been pregnant in the winter since Claire, back when we were living on a college student budget. I spent the bare minimum on maternity clothes, so obviously I don't love any of them several years later. I moved into maternity clothes at week fifteen - at the beginning of August, so I could wear all my favorite summer dresses from Maggie's pregnancy. Now that it's mid-September, fall has definitely arrived in Seattle. Allie (my style guru) and I went shopping last week and came back with a winter maternity wardrobe that I'm really excited to be wearing for the next four or five months.

I've also been taking full advantage of my other favorite pregnancy perk - the freedom to eat dessert every night. I have no idea why (I'm sure it has something to do with not exactly being slim to start with) but I do not put on weight easily while pregnant. I've gained two pounds so far, despite my nightly ice cream consumption. This is actually what led to the whole mess of Maggie being mistakenly diagnosed with IUGR, which led to an unnecessary c-section. I've already had several conversations about this with my new OB though and she seems to really understand that this is just how my body works and the baby is still growing perfectly.

Last Saturday, Allie generously watched the girls all day while Adam and I went to a VBAC Your Way class. It was even better than we expected. With pregnancy complications (both imagined and very, very real) I've never made it to my due date and never been in labor. We tend to think of just actually going into labor as the biggest hurdle to having a VBAC, so it was great to have a whole day to focus on what happens next. We also spent a good portion of the class talking about the real risks of a VBAC versus a scheduled c-section because so many doctors try to worry you unnecessarily.

The class gave me the confidence to talk with my doctor about the arbitrary cut-off at 41 weeks and whether she'd consider extending it to 42 weeks if everything still looked good. Since I have no idea when my body would go into labor, that 41 week scheduled c-section (remember: inductions are risky with VBACs) made me feel quite pessimistic about my chances of success. I asked about it during my appointment yesterday and it turns out she'd be totally fine with 42 weeks, which makes me feel so, so much better about the whole thing. I really like my doctor.

We also had our big ultrasound yesterday morning. We decided to order a gender reveal cake from a local bakery because we thought it would be fun for Claire and Maggie. Dinner tonight will be extra exciting!
Posted by Caitlin at 10:35 AM