When we moved into our rental house, we mounted our TV above the fireplace and repurposed our TV stand as a family altar in the hallway between the playroom and the kitchen. It worked fine, but there were two things we didn't love:

-  the hallway is sloped so the top drawer would never stay closed.
- the cabinet had glass drawers so we couldn't store much in there because it all had to be arranged nicely 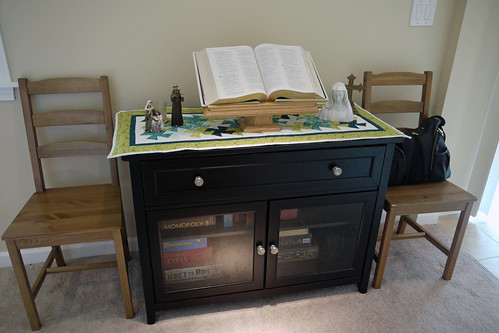 For our five-year anniversary in July, with the traditional gift of wood, we ordered this buffet cabinet for just under $200. It was solid wood, but unfinished. It doesn't have a drawer and it's a little taller and wider than our previous altar, allowing for more storage space. We finally got around to assembling it and applying a few coats of stain and polyurethane. Here's the result! 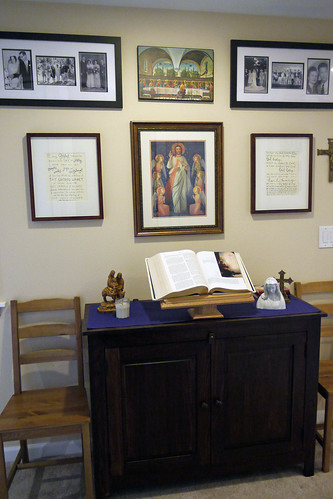 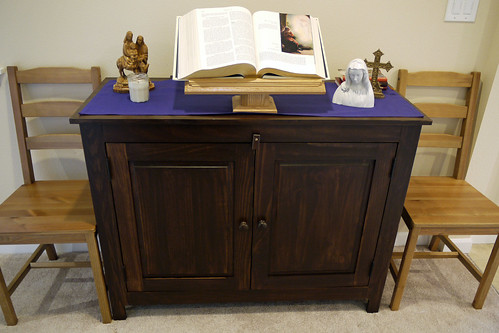 We store all our board games and movies in here. Now that Claire's getting older, we're starting to collect kids' board games and, happily, this cabinet has plenty of room to hold our expanding collection. 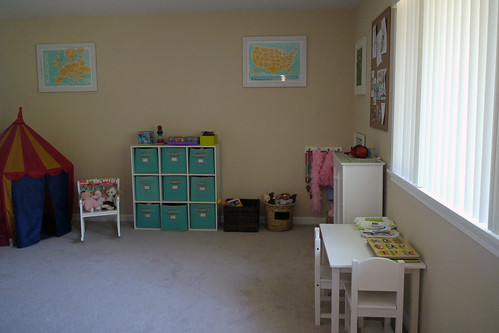 Onto the toy cubbies. When we moved in, we bought an inexpensive nine-cube storage system for the playroom. It used to be centered on the main wall, but moved to the side when we got an electric piano this spring. 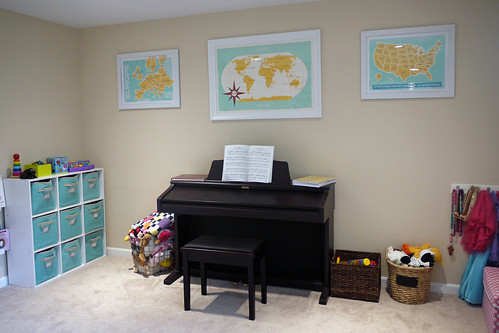 Then we realized we really wanted a glider for our new baby's arrival (the rocking chair we kept in the nursery of our apartment broke before we moved and Maggie was six months old at that point, so we made due without one). That corner of the playroom seemed like the only logical space for one. We had some empty space under the window in our living room for toy cubbies, but we couldn't find the perfect size. The four cubby unit from Ikea would be too small, but eight cubbies wouldn't fit. We decided to build a six cubby unit instead. Here it is! 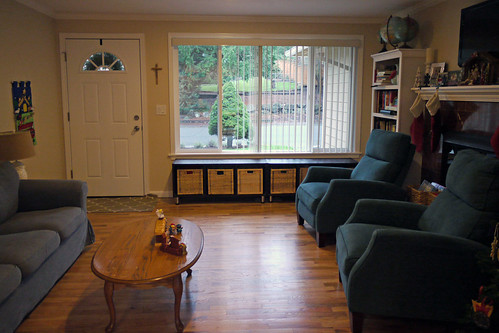 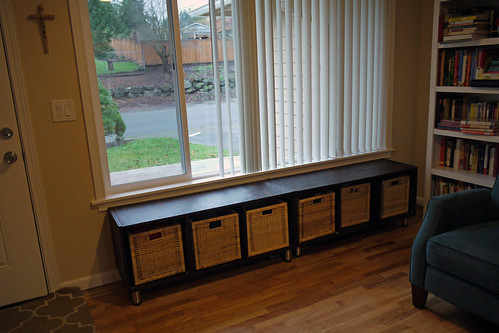 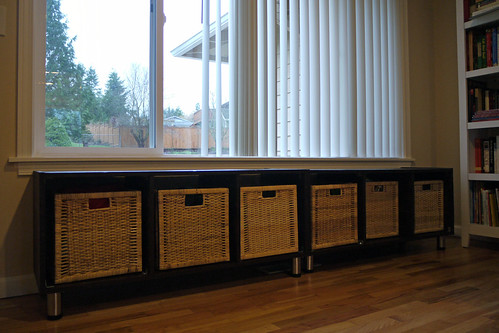 Well, we actually built two three-cubby units to give ourselves more flexibility for the future. They're the same dimensions as the Ikea unit, just down a cubby, so we could use the same baskets. We feel like the projects we've stained (like our desk) have held up better than things we've painted, so we went with a dark walnut stain for these. And we had to add little legs because there's a floor heating vent under there.

The six baskets are larger and taller than the nine bins we used to have, so we were able to fit all their toys in just fine. The baskets are categorized as - blocks, baby toys, trains, vehicles, animals, and pretend (doctor and tool kits).

We're really happy with how they turned out, but we wouldn't recommend constructing them yourself unless you need to fill a specific space like we did. The materials were considerably more expensive than purchasing the ready-made ones, not to mention the time involved.

Now to get a glider set up in the free corner of the playroom!
Posted by Caitlin at 7:22 PM