It's hard to believe we've had over two weeks with Betsy already! My mom stayed for a week after her birth. My dad flew in the next weekend and they went home together on President's Day. We are incredibly grateful for my mom's three weeks of help. I am so very glad they live in the same state now, instead of across the world in Shanghai. Claire and Maggie were saying they missed their grandparents as soon as they drove off to the airport! Thankfully, we'll see them again in a few weeks for Claire's birthday and Betsy's baptism - Adam's parents and his younger sister, Katie, will be visiting then too. 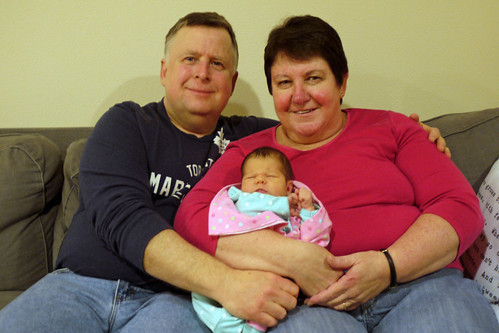 Adam is off on paternity leave full-time until Easter. Early in Betsy's pregnancy, his company announced that they were upping their paternity leave policy from four weeks to twelve. What an amazing gift! You're allowed to take two weeks and stretch it into four by working part-time, so he'll do that after Easter Sunday and go back to work for real at the end of April, bringing him to nine weeks total right now. We are loving having him home! He has been taking the big girls to their activities, running errands, and just doing a wonderful job taking care of all of us.

Our church friends have been super generous with providing meals. We've hired a cleaning service to come once a week - it's out of our budget to keep up forever so we'll have to wean ourselves off that in April or May but for now we're really loving it. Without cooking and cleaning to worry about we've been able to manage taking care of three small children, laundry, and general tidying pretty well. We're trying a new schedule of giving one of our children a bath every day. 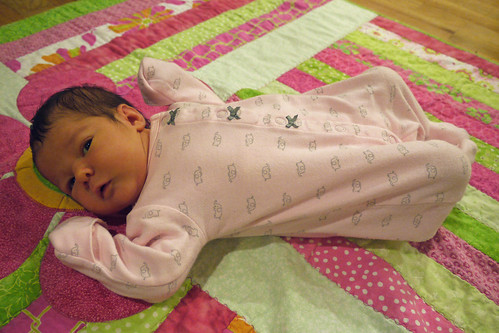 Claire and Maggie have been pretty sweet with Betsy. They mostly ignore her, which is to be expected, of course. They've definitely been feeling a little "off" since she arrived - lots more tantrums from Maggie and potty accidents from Claire. Thankfully, they haven't taken any of their emotions out on Betsy like I've heard some stories of (hitting her, saying that they want her to go away, etc). They really love their new Saturday morning ballet and gymnastics class!

Betsy has been doing great so far. We feel so much more relaxed the third time around, like we can do what works for us (giving her a pacifier early on, letting her sleep in our bed) and not worry about the rest. She has her fussy moments, just like any newborn, but she's been a really good eater and sleeper overall. Of course, we think she is the most beautiful, precious baby in the world and smother her with kisses all day (and night). 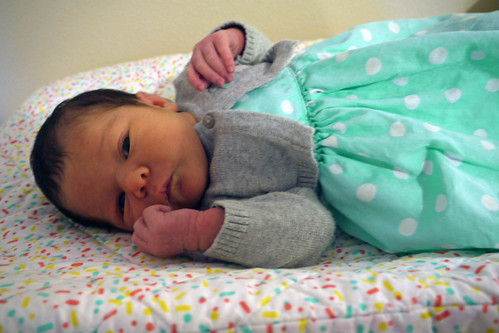 I have been feeling amazing recovery-wise compared to my two previous c-section deliveries. Adam has remarked that I seem really happy lately. Definitely accurate! I have just been loving life - him, our daughters, our parents and siblings, our friends, our cozy rental house, Adam's awesome company for giving him so much time off.  I have also been loving not having much to do besides snuggle a baby, watch tv, and read. I've already binged my way through Fixer Upper and The Great British Baking Show on Netflix. Right now I'm reading "Upstairs at the White House" and would highly recommend it - written by the chief usher during the Roosevelt through Nixon presidencies.

We used our annual Costco rebate to buy a chest freezer for the garage. I am so excited about all the possibilities this will open up in the cooking department. We could buy meat from a local farm! We will be able to freeze many more berries from our picking adventures this summer! I think I'm most excited about getting a second freezer bowl for our ice cream maker.  Hopefully we can put it to good use preparing some freezer meals before Adam goes back to work - something I didn't get to during Betsy's pregnancy. 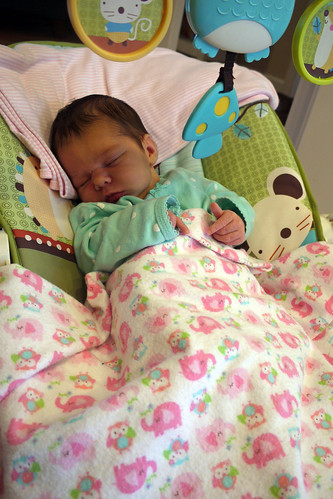 Although we have no idea what we'll be doing for kindergarten (every option has so many pros and cons!) we signed Claire up for preschool next year. She'll be going to our town's co-op preschool. It's three afternoons a week for $140 a month, more than $200 cheaper than our parish preschool. The catch is that you have to volunteer once a week (without your younger children). But since they meet from 12:00 to 2:30 and Adam's office is so close, he can take an extended lunch break and do the volunteering. He'll just go in earlier and stay later that day. It's a play-based preschool, so they do centers, have circle time, do crafts, and play outside. Claire went with Adam on a tour last week and didn't want to leave!

We cashed in our air miles to book tickets to visit my grandma in Ottawa this summer. We are flying out of Vancouver since we'll be there for a cousin's wedding anyway and that way we can take a manageable four-hour direct flight. We're planning to spend part of the trip in Quebec City - I'm so excited to visit the St. Anne Shrine there! She's my confirmation saint. Between Ottawa and Quebec City there's a site of several Marian miracles, Our Lady of the Cape. We'll be there for the annual Assumption Festival, which should be a really cool experience. We should probably start brushing up on our French though... 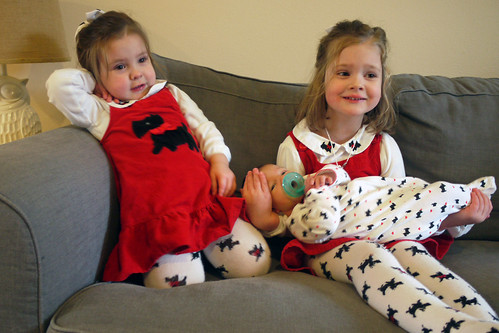 Allison should be back for her summer visit then and will hopefully be able to come with us. We love going on trips with her! Her company is much appreciated and it's so nice to have an extra set of hands when you're traveling with small children. Her idea of a good vacation is also touring pretty churches and finding delicious restaurants, so she's a perfect travel buddy. All seems to be going well at the Farm so far. Her best friend from nursing school is coming for a week in March and I know Allison is really looking forward to her visit. For a Lenten service project, our playgroup at church collected Spanish children's books for the orphanage's library. I was blown away by everyone's generosity - they contributed several dozen books! 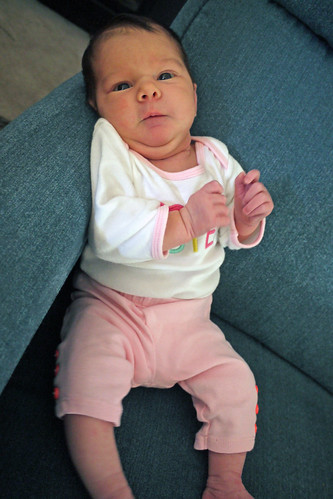 Okay, I think that's officially all that's new here. Off to finally change out of my pajamas!
Posted by Caitlin at 3:14 PM