Well, before I share that, let's back up to the day of our twenty-week ultrasound. My dear friend Michelle offered to watch the girls so that Adam and I could both go to the appointment. Then, since our appointment was at 2:30 in the afternoon, she kindly invited us all to stay for dinner. We agreed, as long as she would let us pick up Chick-fil-A for everyone on the way back! Claire and Maggie remembered how we ordered a little gender reveal cake from a bakery back when I was expecting Betsy and wanted to find out the gender of their newest sibling the same way. But since we wanted to do the gender reveal that night with Michelle's family, we didn't have time to order from a bakery. Instead, Claire and Maggie helped me bake two little cakes the day before - one with pink batter, one with blue. We used the Smitten Kitchen "best birthday cake" recipe, which worked perfectly for two six-inch layer cakes. When I frosted the cakes that evening, I put extra sprinkles in the middle of one cake so I could tell them apart. Extra sprinkles = extra exciting = boy! The pink and blue food coloring in the batter faded so much once they were cooked. Next time I need to add way, way more food coloring or do a layer of colored icing in between cake layers instead. Thankfully you could still barely tell what we were going for. 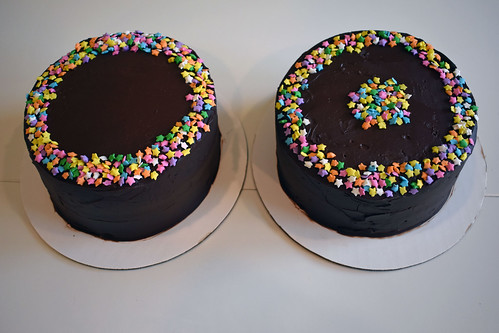 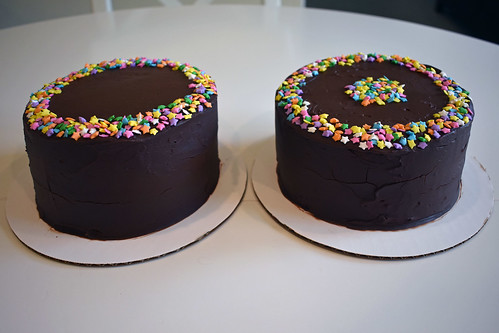 Here we are cutting into the cake after dinner! Michelle was so sweet and bought some decorations, like napkins and balloons, to make things even more festive. That's her daughter, Theresa (she's Maggie's age) asking for a little brother too in the video.

Adam and I spent that afternoon discussing baby boy names and quickly agreed on using the same name we'd decided on if Betsy had been a boy. This baby's name will be...

Unless the ultrasound tech was wrong, of course. He had the most hesitant way of talking, ending almost every sentence as if it was a question. Not a great quality for an ultrasound tech! But we triple-checked with him, so I guess this is as confident as we can be for now.

We like our kids' first names to be after their patron saint and their middle name to be after a relative. We've got Claire Camille (St. Clare of Assisi), Margaret Joyce (St. Margaret of Scotland) and Beatrice Jacqueline (St. Beatrice of Portugal). 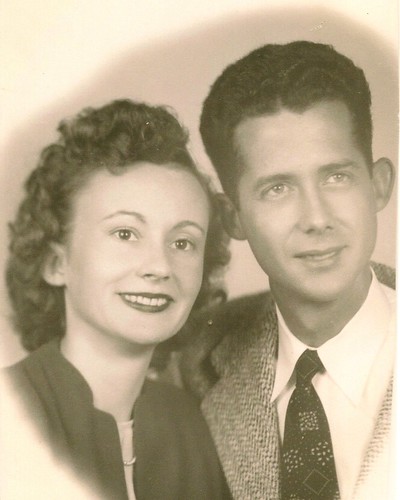 Warren and his wife, Camille.

So far, we've used our grandparents' names for middle names. (I hope we get to use the last grandmother's name one day!) Warren is Adam's paternal grandfather. Adam is actually named for him too - Warren is his middle name as well. That's why we decided to use his name first, especially since we've already used my middle name (Margaret). He passed away shortly after Maggie was born, so right around George's due date four years ago. 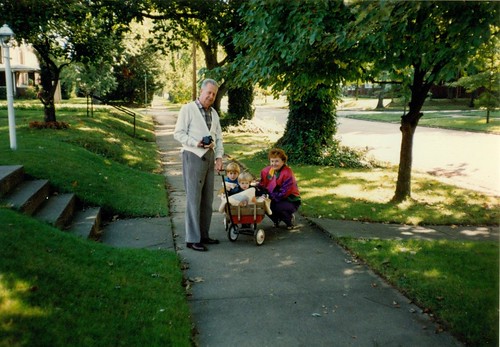 Adam's the little boy in the wagon!

All of our kids' first names also get bonus points for being family names. Claire is the name of my childhood neighbor/honorary grandmother. As I just mentioned, Margaret is my middle name. And Beatrice is one of my great-aunts. George is one of Adam's great-uncles. Warren's oldest brother, in fact. He was actually a very renowned cardiologist - there's a pretty lengthy article about him on Wikipedia. 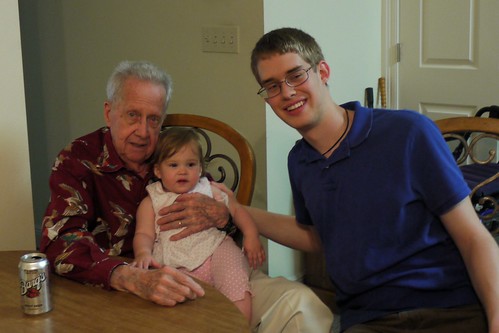 Claire got to meet him twice, the last time when she was about Betsy's age.

We wanted a name to kind of balance out Claire, because Maggie and Betsy have similar styles going on their longer first names and both always going by a nickname with an 'ie/y' ending. We wanted a name with a different ending and with no nickname.

Claire and Maggie remembered the name George from Betsy's pregnancy and were eager to use it for their baby brother. They love reading the story of St. George and the Dragon. Our paperback copy is in tatters, we've read it so many times! George will have to get a nice new hardcover edition for his first Christmas. 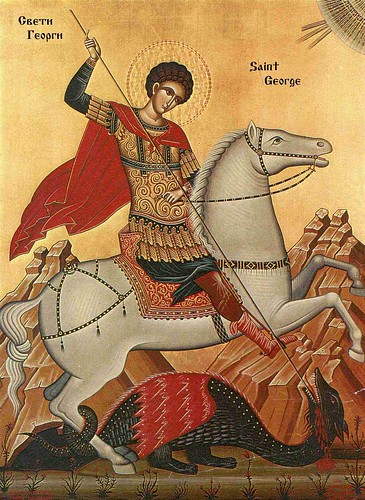 St. George is the most ancient saint we've chosen as a patron thus far. We have this very unrealistic pipe dream of somehow taking our children to visit the shrines of their patron saints one day, so we had to check that there's a shrine somewhere where one can pray with St. George's remains. (Like St. Clare's Basilica in Assisi, Italy, St. Margaret's castle in Edinburgh, Scotland, and St. Beatrice's convent in Toledo, Spain.) Well, turns out St. George is buried in a Greek Orthodox church in a suburb of Tel Aviv, Israel. 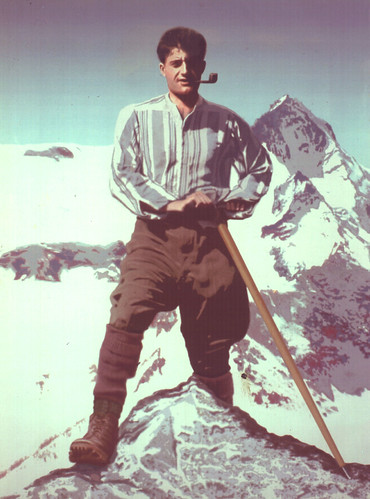 Of course, we also really love Blessed Pier Giorgio Frassati and hope that he is officially canonized a saint one day. When we finalized the name George, I immediately ordered this print (of Frassati's motto, "To the Heights") for the nursery. Basically, I've been having way too much fun ordering a couple new things for the nursery, along with some baby boy clothes. I definitely need to restrain myself!
Posted by Caitlin at 6:15 PM