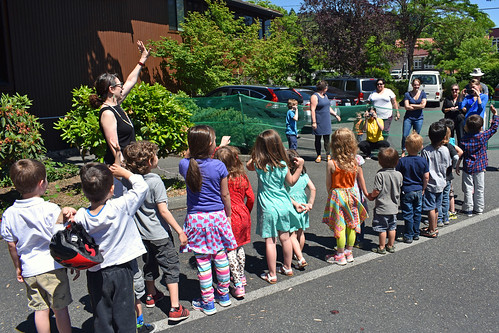 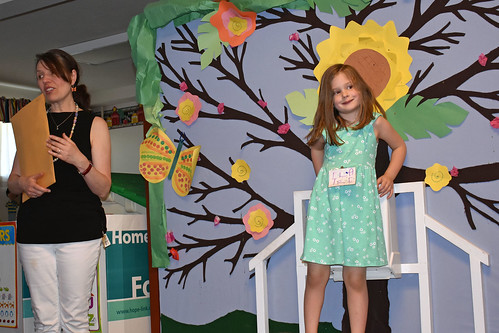 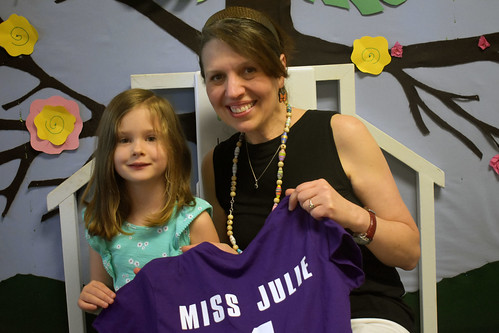 About this time last year, I wrote a post about the six different schooling options we were considering for our kids and how we'd decided to send Claire to a year of play-based, cooperative preschool.

Well, she finished up preschool about a month ago and had the best time. She loved her teacher, the friends she made there, the daily art projects, and playing outside. Maggie and Betsy really loved being able to join in occasionally for field trips and holiday parties. Adam and I took turns doing the weekly volunteer shift. We enjoyed our time there - our favorite job was being the story person (it was fun to find books that went with the week's theme) and our least favorite was being the snack person (although I had a tendency to overthink things and spend too much time on themed snacks). It definitely added a bit of stress to our week because Adam had to take time off work for one of us to volunteer - he would stay late that evening to make up for it. Most of the other parents either had an only child or this was their youngest or they had family in town to watch their other children. A couple moms, who each had one younger child, did a babysitting swap with each other. I think that would be the ideal set-up for us if we could ever arrange it.

On their last day in their classroom, they symbolically released some butterflies, had a little graduation ceremony, and watched a slideshow that brought all the parents to tears. On the very last day of school, they had a picnic in the park. Both Claire and I were pretty sad about preschool coming to an end. It's the end of this little five-year era of not having to worry about a school schedule. After all, Adam was still in school when Claire was born!

For elementary school, the only option we really crossed off our list was the public charter school. You have to drive your kids and it's just a bit too far for that to be a good option for us. I don't see us ever moving to that neighborhood, since it's more expensive and farther from Adam's work. We also determined the neighborhood public school and the traditional coop at a nearby parish weren't options we needed to eliminate entirely, but weren't what we wanted to try right off the bat.

So, that left our parish school and two homeschool enrichment programs. We toured all three of these and honestly, they all sounded really great. Ultimately, we went with our parish school because it's the only option that might not easily be on the table down the road. They have one class of thirty students for each grade. If we tried homeschooling and wanted to quit a few years from now, it would be very, very unlikely that the school would have openings in fifth, third, and first grades, for example. Especially when we found out we'd be welcoming another baby sooner than we'd originally planned, it just made sense to start with the parish school and try homeschooling at some point down the line if we need to.

We don't have a projected budget of how we're going to pay for 4+ children to attend Catholic school. We know we can afford Claire's tuition right now. We will certainly have to seriously reevaluate everything when Maggie enters kindergarten in two years - whether we can afford the tuition increase, if the school is a good fit for our family, and if we feel like the school is worth the financial sacrifices. But the only way we can really know these things is by giving it a try!

Kindergarten is from 8:30 to 1:30, with the choice to stay for "optional time" (games, centers, etc) until 3:15. I am hoping we can pick up Claire up from school at 1:30, although most kids stay so I have to prepare for the possibility that she'll really want to stay too. I just think it will be good for her to have more time at home to play with Maggie and it will be easier for me to wait until 1:45 to get the little kids down for their naps, rather than having to wake them at 3:00 for pick up. I'm hoping at the very least we can have her come home early on the days she has afternoon activities.

She will still do Catechesis of the Good Shepherd, even though she'll also have religious instruction at school. It's such a great program and I don't want her to miss out on the benefits. She doesn't have to keep going all the way to age twelve if she really doesn't want to, but for now I don't think she'll have a problem with it. She's not old enough to know that it's not required and she'll be happy that Maggie will be in class with her.

In the fall, she will do CYO soccer, which thankfully is just in September and October, so it will be finished by the time our new baby arrives. She'll also be in the programs Adam and I already volunteer with, American Heritage Girls and the children's choir. Those are pretty low-key once a month commitments, so I don't think it will be too much.

During the spring semester, I would like to put Claire and Maggie both in swim lessons, more intensive than what we've usually done in the summer. I think at almost 6 and 4.5, they are old enough to really get it. Those will have to be either once Adam gets home from work in the evening or on the weekend, because the prospect of bringing a two-year-old and a newborn to the pool as well doesn't sound very appealing.

Maggie will not be doing preschool this year. I know she would absolutely love it and I wish there was some way to make it work, but we've determined that we will only be able to give our children one year of preschool, at least as long as our older kids are going to the parish school. The coop preschool is too big of a time commitment for us to do for two years for everyone and the next cheapest preschool we've found is double the cost. We need to save our money for elementary tuition! We are planning to have Maggie do the coop preschool the following year, when she's four, and we're hoping that by the time Betsy's four maybe we'll be able to afford a year of traditional preschool.

As I mentioned above, she will do the afternoon session of Catechesis of the Good Shepherd with Claire. I would like her to have one more class of some sort - after all, she will be four in October. When Claire was three, she did CGS, music class, and one more little activity - cooking class in the fall and dance/gymnastics in the spring. Unfortunately, I think our time in music class has to come to an end. I would need to enroll both Maggie and Betsy, which is now just too expensive, and I know from past experience that it's too hard to juggle a little baby, a toddler, and a preschooler in class. (I only had to do that for two months after Betsy was born, but this time it would be for a whole semester.) We will all miss their lovely music teacher, but music class will have to be fondly remembered as part of this sweet five-years-with-only-little-kids era. We've moved past the time for paid activities for under-preschool-age children.

One of the kindergarten instructional assistants also runs a preschool art class out of her home one morning a week. I'd love to get Maggie in that if possible, especially because I'm not great at doing that kind of stuff at home with multiple smaller children underfoot. If that doesn't work out, I've thought about putting her in some sort of soccer class of her own in the fall, because she loves to be just like Claire, and then as I already mentioned, having them do swimming together in the spring. But after going to the pool with them this weekend, my mom made the excellent point that maybe Maggie needs a full year of swimming, and Claire should just join in for the spring semester. (Claire, being eighteen months older, has much less fear and much more desire to figure it out.)

Adam and I are looking forward to school imposing more of a schedule on our days. His work is very flexible and he's definitely a night owl, so for the past five years it's been all too easy to get into the habit of not getting to work quite as early as he should and then finishing up a few things in the evening. Since we only have one car, I will be taking the kids to drop Claire off at school and we'll all be leaving the house at 8:15, which is a solid hour before Adam usually leaves! I have grand visions of going to daily Mass every day (it starts right after the school bell rings) and then heading to the gym. I'm clearly not thinking past October, ha ha, but for those two months at least it should work out quite nicely.

The school had a used uniform sale at the beginning of June, so I got Claire stocked up on plaid jumpers and red cardigans for less than $25. Is there anything cuter than a kindergartner in a Catholic school uniform?!
Posted by Caitlin at 6:15 PM