The First Month of Our First Child in Kindergarten 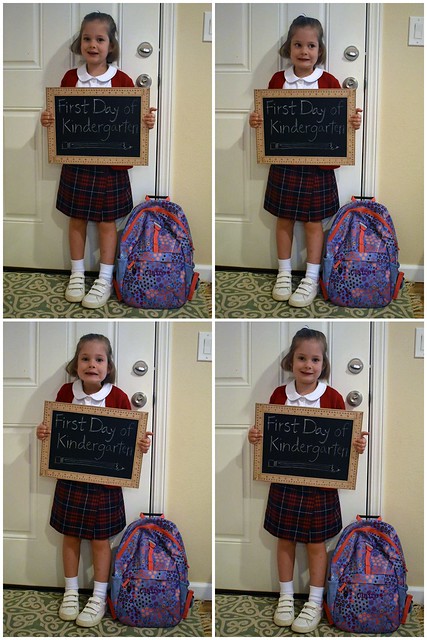 Claire started kindergarten at our parish school right after Labor Day. It hasn't been a perfectly smooth transition, but so far we are all enjoying the new schedule and we feel very confident that we made the right decision for this school year.

She has school from 8:30 to 1:30 every day - all the other grades stay until 3:15, but the afternoon time is optional for kindergarten. Claire will probably be our only child who gets the opportunity to leave early, except for maybe our youngest. But she seems to appreciate the extra time at home to play with Maggie and has not asked to stay yet. It's been working out great because Betsy's pretty flexible at almost two and I can just put her down for a nap after school, rather than having to wake her every day for pick up.

Kindergarten has two recesses and a different "special" every day - library, gym, music, art, and school Mass. They go on two field trips a semester and have parties for just about every holiday. I know kindergarten is way more academic than it used to be, but it's still a lot of fun.

Claire gets to buy her lunch once a week, on pizza day, and brings homemade "lunchables" (cheese, ham, crackers) the other days. I like to have all the components already sliced up so she can assemble it herself. Only on weekdays, she has about five to ten minutes of homework, usually a simple math worksheet and handwriting practice. I try to sit with her and get that done right after I put Betsy down for a nap after school.

We were most worried about getting everyone out the door by 8:15 every morning in a relatively calm fashion, but it's gone much better than we imagined. Adam and I try to get up at 5:30 so that we have some quiet prayer time before starting on chores. We're significantly more successful on Mondays than on Fridays! As long as we wake up at 6:00, we have enough time to get ready, make our bed, empty the dishwasher, and make breakfast. We get the girls up at 7:00, eat breakfast together, make their beds, get them dressed, clean up the kitchen, and then we're all out the door.

The best part about school is that it's added the structure into our life that's been missing for the last five years, since Adam's job as a software developer is very flexible. Now that he spends from 8:30 to 5:00 at the office, he hasn't had to do work at night once in the last month! (Before kindergarten started, he usually left for work about an hour later but came home at the same time, so he almost always had work to finish in the evening.) Since we have to make Claire's lunch, we have been so much better about packing Adam's. I've been trying to plan meals that will provide leftovers for him to take, which makes it a no-brainer and is really great for our budget, especially now that we're paying Catholic school tuition.

Another great part of school is that daily Mass starts at 8:40, leaving the little girls and I with just enough time to swing by the parish library to chose a picture book for each of them and then head into the church. We don't go every day, but we've made it two or three days a week thus far. I love going to daily Mass, even if it's a bit crazy with two small children tagging along. I couldn't imagine getting out of the house that early before! On days we attend Mass, we often head to the Y afterward, then come home for lunch and play/chore time before getting Claire. It's basically my idea of a perfect morning. 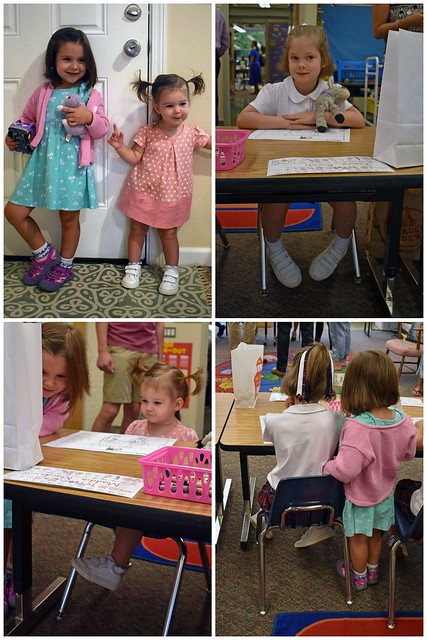 But, of course, things haven't been perfect. Claire has been very tired as she adjusts to kindergarten and a tired five year-old is obviously more likely to whine or throw tantrums. Transition times have been especially tricky - when it's time to leave for school in the morning, when we get home from school, and when it's time to clean up toys/eat dinner/get ready for bed. Maggie has been demonstrating similar behavior. I'm not sure why she would be more tired than usual, but I imagine it's just been hard to adjust to life without her best friend around in the mornings. Betsy actually seems happier, though, because Maggie has been sweetly playing with her while Claire's at school. Before the dynamic was the two older sisters playing while the baby sister messed up their game, so it's been really nice to see Betsy included in play time.

Claire and Maggie sometimes have a hard time reconnecting and playing together in the afternoon without constant squabbles. Reading a couple picture books together once Betsy's down for a nap seems to help. A few times when the fighting has been really bad, I've had them lay down in bed and listen to a chapter of our current read aloud.

Claire has been playing CYO soccer and we all have mixed feelings about it. She has practice on Monday afternoons and games on Friday evening. The practice is pretty early in the afternoon and she always complains about how she doesn't have enough time to play that day. But she does really like the two other girls on her team and Adam and I have enjoyed getting to know the other parents. We're glad we gave it a try, but I don't see us signing up again next year. Only three more weeks! We had our first American Heritage Girls meeting (I am leading the kindergarten girls this year) and the next day, Claire said, "I really liked going to the girls' club with you, Mommy." So I'm counting that as a big win and hoping she feels the same way about going to children's choir with Adam when it starts in November.

Both Claire and Maggie go to Catechesis of the Good Shepherd. Claire also has religious instruction in school, but it's just workbooks and CGS, being Montessori, is very different. She doesn't seem to mind going at all, although she's never really told me much about it. I've learned more from Maggie in the last month than I have from Claire over the past two years!

Maggie has a little music class one morning a week and a little art class another morning. I know I said in my last post about schooling decisions that we would have to say goodbye to our beloved music class, but when I emailed the teacher to tell her we couldn't afford it on top of Catholic school tuition, she generously offered to subsidize our monthly fees. She is the best! It will be hard with a newborn tagging along as well during the spring semester, but Maggie and Betsy just love it so much that I couldn't possibly refuse her kind offer. Art class is actually taught by one of the kindergarten instructional assistants, in her home. It's been really wonderful thus far. I know Maggie would love to be in preschool, but she very much appreciates and enjoys the three activities she's enrolled in. All together, they're significantly cheaper than any preschool I've found in our area.

Basically what this all boils down to is that Claire is enjoying kindergarten, Maggie is enjoying her preschool activities, Betsy is enjoying having one-on-one play time with her next oldest sister, and their parents are enjoying have more structure imposed on our days. Things are going quite smoothly for the most part - just in time to add a newborn into the mix. We're actually moving Betsy into the big girls' room tonight in preparation for their little brother's arrival. Wish us luck!
Posted by Caitlin at 7:07 PM