A Weekend in Portland

Early last week, we looked at the weather forecast and discovered rain was predicted for most of Labor Day weekend. We were bummed for a while, until we remembered that we had enough reward points from Hyatt for two free nights. Upon inspecting the Hyatt website, we learned that there are hotels in Vancouver and Portland. And it looked like the weather was supposed to be beautiful in Portland, so it became our spontaneous Labor Day weekend jaunt for the second year in a row.

But this time we learned our lesson and avoided the rush hour traffic on Friday afternoon! We left at 11:00 on Saturday morning, stopped for lunch in Olympia, and checked into our hotel in Portland at 4:00. Then we promptly got back in the car at 4:30 to have dinner at Ken's Artisan Pizza. I read all about how fantastic it was in Delancey. According to Yelp reviewers, you need to get there right as it opens at 5:00 if you don't want to wait in a spectacularly long line. We parked at 5:00 on the dot and snagged the very last spots in the restaurant. It really, really was amazing pizza. Especially the crust. Definitely lived up to the hype! We stopped at Salt & Straw for ice cream afterwards, which was equally delicious. We weren't brave enough to try some of their more unique flavors though, like strawberry balsamic black pepper or pear blue cheese. 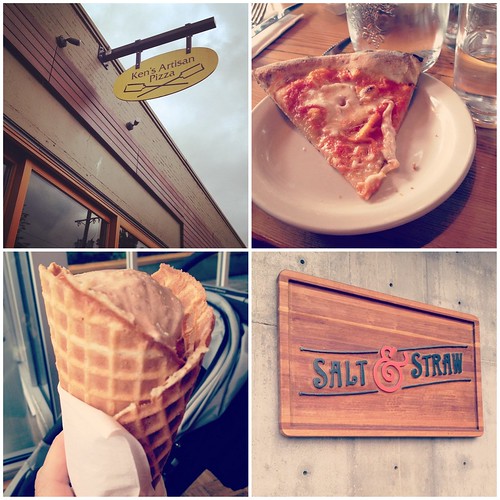 This was our first time sleeping in a non-suite hotel room with two kids. And really the first time we've slept in the same room as Claire since she turned one. Needless to say, we were a little apprehensive. We borrowed a second pack-n-play from friends and I nursed Maggie to sleep while Adam read stories to Claire in the lobby. He plopped her in the pack-n-play and she went straight to sleep! The process went much smoother than we'd hoped (they often sleep in the same room at home, but we always stagger their bedtimes). Of course, then we had to spend the rest of the evening laying in complete darkness, reading books on our phones and watching Yes, Prime Minister while sharing a set of headphones.

On Sunday morning, we went to Mass at a nearby parish and then drove to the Crown Point Vista House for a fantastic view of the Columbia River Gorge. 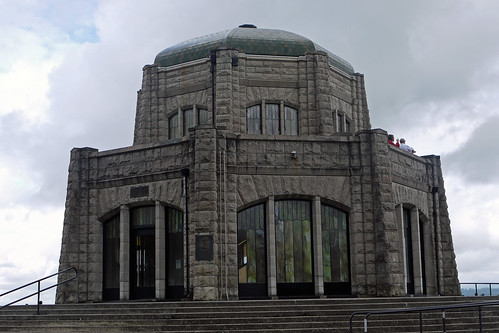 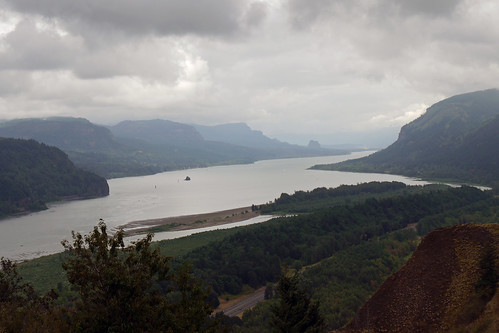 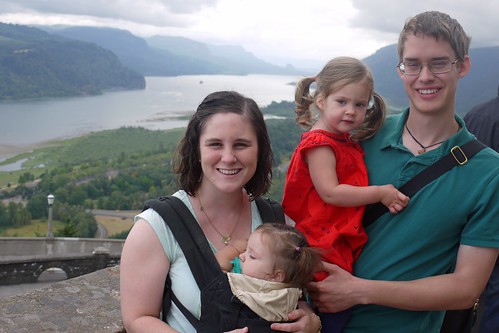 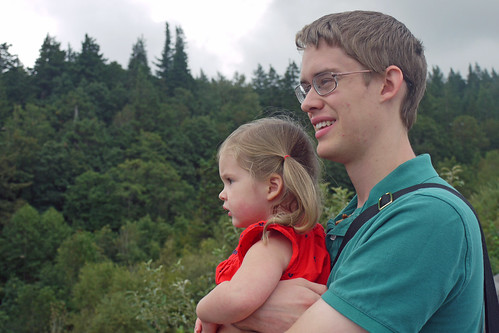 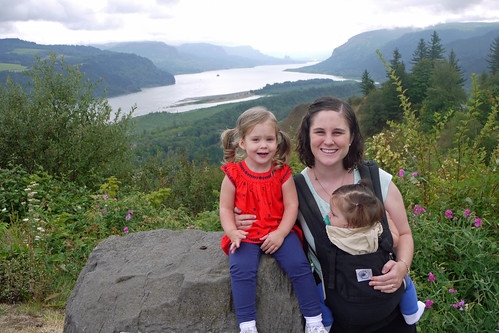 Pretty amazing, right? From the view point, we hopped on the Historic Columbia River Highway and headed to Multnomah Falls. Parking there is quite tricky (I would definitely advise arriving earlier than we did, at 11:00 am) but thankfully we found a spot. We had lunch at the lodge at the base of the falls. Since it was Sunday, they had a brunch buffet, which was overpriced and not that great, as those things usually are. In retrospect, I definitely wish we had packed a picnic instead. 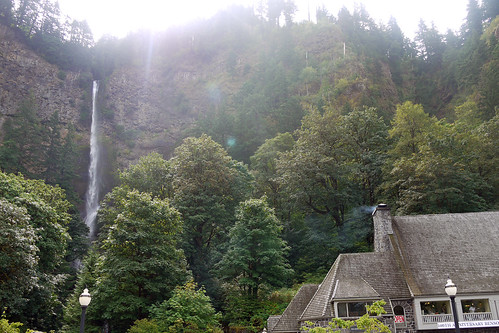 We took in the beauty of the falls from below. 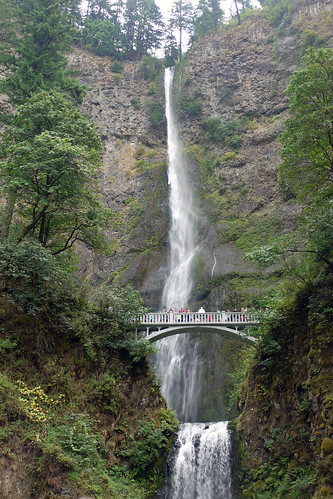 Then walked up to the bridge. 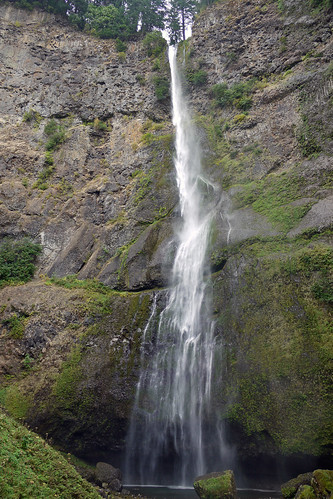 And then we decided to hike all the way up to the top. 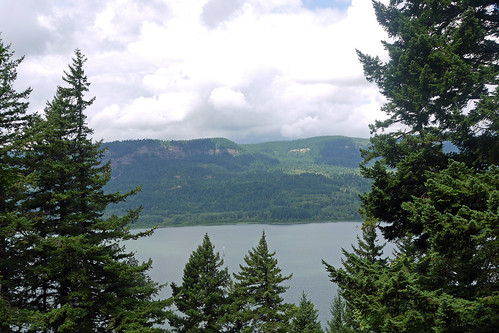 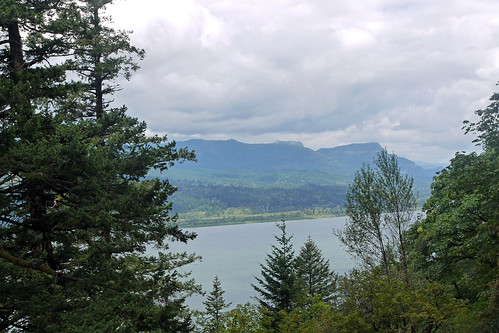 There were some amazing views along the way. And my very patient husband did not complain at all about carrying a thirty-pound toddler and the diaper bag up the mountain. 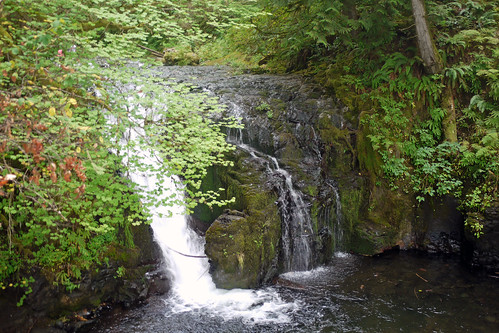 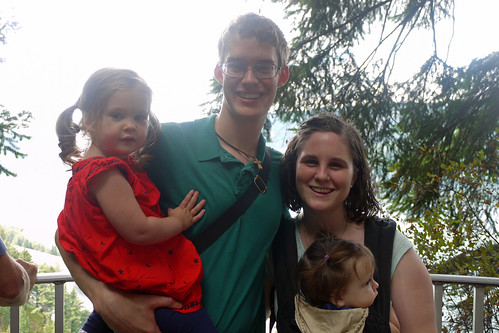 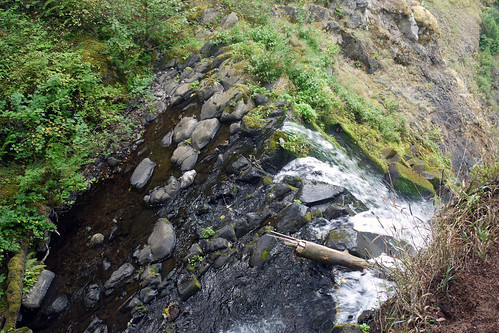 We made it! The signs at the bottom very clearly stated that it was a one-mile hike. But it was definitely one and a quarter. Very, very tricky. 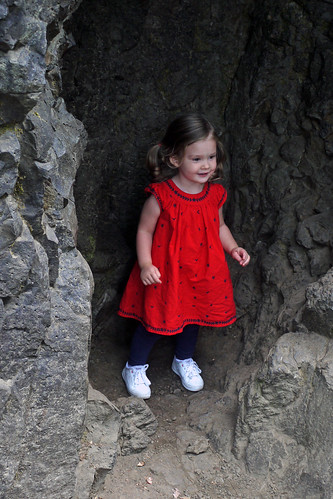 Claire's favorite part of the whole thing was this little cave that was just her size.

We had visions of them both napping in the car on the way back, while we took in the views along the scenic highway. HA. There was so much screaming that we unanimously decided a chocolate break was in order, satisfied by a quick stop at the Rocky Mountain Chocolate Factory in the Troutdale outlet mall.

We had dinner at the Chipotle down the street from the hotel and had both girls in bed by 7:30. Which, of course, meant that they were up and raring to go at 5:30am. So, we enjoyed our complimentary breakfast, swam in the hotel's indoor pool, packed up, and were still on the road by 9:00 on Monday morning. We stopped for lunch in Tacoma and were back home at 1:00.

Just in time for naps.

Overall, it was a fantastic way to end the summer. And it will go down in the books as a road trip without a single carsickness incident!
Posted by Caitlin at 6:06 PM