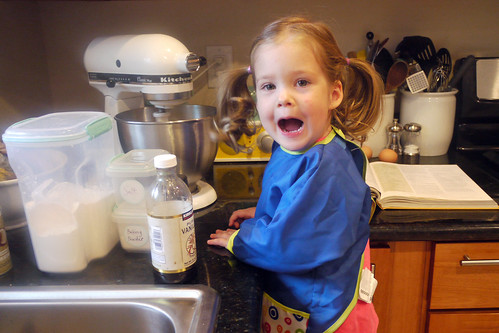 Understands that there's a difference between boys and girls (although she doesn't know anything about the anatomical difference) and is beginning to get the concept of last names. She is so, so close to correctly identifying all the letters in her first name.

Makes the sign of the cross when we're praying and actually clasps her hands correctly. At church, she loves blessing herself with holy water and shaking hands during the sign of peace. When she hears a siren, she asks Jesus to "take care of it."

Loves to sing and dance. Her favorite songs are "Let it Go" and "Tomorrow." She doesn't like to sing when she knows we're watching (with the exception of the ABCs) so we mostly hear her belting out "Twinkle, twinkle little star" and the like from her crib or when she's playing independently. She must be properly attired in dress-up clothes in order to dance, which is mainly just spinning in circles.

Has gotten really into pretend play. She likes to set up tea parties for her dolls and stuffed animals. Ever since our big vacation earlier this summer, she's been obsessed with airplanes and likes to pretend she's going on a trip. She would love to bake and do art projects with us way more often than we're able to make happen.

Climbs up all sorts of ladders and jungle gyms at the playground (including all the way up the very big slide!) but still loves the swings the best. Refuses to use anything but a baby swing so far. She can swing her body when hanging from the bars. After many months of trying to get both feet off the ground, she's figured out how to jump.

Surprised us with her swimming abilities! She's no longer afraid of floating on her back or putting her head underwater, thanks to two weeks of swimming lessons with her Great Aunt Gail.

However, she is pretty terrified of bugs, especially spiders, and loud noises. She absolutely hates the sound of the blender. Our town had a "big truck day" for kids, where they could see all sorts of trucks up close. Claire got so upset with other kids constantly honking the horns.

Watches an average of two tv shows a day. On good days, it's one (or none!) and on bad days it's more like three. Her favorite show is Peppa Pig and she's even picked up some British vocabulary, like referring to her bathing suit as a "swimming costume." She also loves Daniel Tiger, followed by Super Why and Peg + Cat. Franklin, Madeline, Blue's Clues, and Winnie the Pooh also make occasional appearances.

Constantly asks us to read stories. We check out between six and ten books from the library every week and she almost always has the title and general plot of each memorized in just a few days. She does have a few of Maggie's favorite board books memorized and loves to "read" them to her.

Will eat carrots and celery as long as they're accompanied by ranch dressing. Finally eats breakfast without much complaint. She's very fickle, as all toddlers are. Sometimes she can't stop stealing grapes from the bag the entire time we're grocery shopping, but then you'll serve them for lunch and she won't touch them for a week. Absolutely loves chocolate in any form!

Started to show interest in choosing her outfits, although she's pretty easily persuaded into what I picked out. She would wear a church dress every day if she could. She doesn't protest having her hair washed or teeth brushed anymore. She can put jackets and shoes on by herself. She can guide her arms into sleeves if you put a shirt over her head, but refuses to help get her skirts or pants on. She doesn't like stopping play time for diaper changes and never tells us when she's pooped anymore. Actually, if you ask her, she usually lies and says it's still clean.

Sleeps between ten and thirteen hours a night, depending on if she napped. She doesn't nap consistently anymore. Some weeks are really great, but other weeks she'll only fall asleep twice. She's yet to attempt climbing out of her crib, although she has climbed in on a few occasions.

Only got carsick once in the last several months, after we let her watch a video on my phone, desperate for a few minutes of respite from whining.

Still occasionally holds her breath when she gets upset. When we were at the park with a group of friends from church, she fell down and then promptly stopped breathing. Everyone was shocked to see how nonchalantly I handled the incident.

Is definitely a daddy's girl. When there is a choice, she always prefers Dad to be the one who puts her to bed, changes her, holds her hand, etc. This was especially true on our two-week summer vacation, which absolutely never led to any embarrassing situations for Mom in front of relatives.

Loves her little sister. She is pretty great at entertaining Maggie, especially with a rousing game of peek-a-boo. She's gotten especially into "wrestling" lately, which is confusing because sometimes Maggie finds the roughhousing hysterical and sometimes her reaction is the complete opposite. Maggie is the only one allowed to play in the circus tent with her. Now that Maggie's crawling, Claire does not appreciate her little sister's new-found ability to steal toys. When Maggie gets upset in her car seat, Claire is likely to flip out as well, only on a grander scale. She's not overly-dramatic or anything. Not at all. 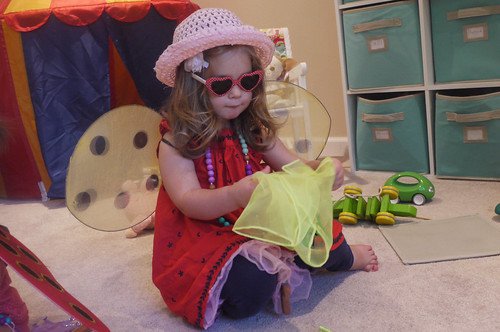 Let the potty training commence!
Posted by Caitlin at 5:11 PM