For our past five years of marriage, we've mainly traveled to see our parents in Houston and our grandparents in Ottawa, New Orleans, and Orlando. We've also taken some just-for-fun weekend trips to places like Toronto and Washington D.C. while were living in Pittsburgh and Portland and Vancouver now that we're in Seattle.

We've long dreamed of doing something big for our five year anniversary. In particular, we'd hoped to visit Shanghai to see my brother graduate from high school. But, when you factor in the cost of flights, visas, hotels (we can't stay with them because my mom and brother will be moving to a smaller apartment in their building when my dad starts work here) and childcare expenses (we aren't brave enough to bring the girls with us) it just wouldn't work with our $5,000 budget.

Our other idea was to do something with my family because it's also my parents' 30th anniversary in August. We were thinking an Alaskan cruise. But, with taking my brother to scholarship interviews, college orientation, and getting him moved into the dorms, my dad wouldn't have enough vacation to spare this summer.

So, back to the drawing board we went. For various reasons, we thought the beginning of May would be ideal. Although I tried to sell London to Adam (perhaps even showing Claire a video of "Peppa Pig World" so she could join in the persuasion) we eventually decided on a week in San Francisco. 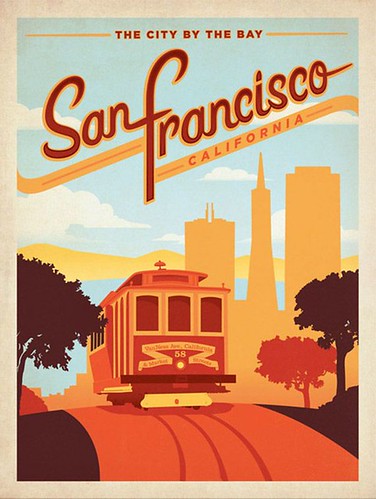 We feel really good about it! We've already booked our flights, apartment, and rental car for $2,400 - less than half of our original budget. We've never been to California before, so we're excited to explore the Bay Area. It will be the 12th state we've visited in our ten years together, so at this rate we'll have hit the whole continental U.S. at our 40th anniversary.

While we were brainstorming, we realized that we only have fifteen more summer vacations with Claire before she goes to college! When we think about all the places we'd love to see with her, fifteen doesn't seem like all that much.

We really hope to take at least one more trip to visit our grandparents in Ottawa and Orlando (1).

We'd love to explore more of California. San Diego, with the beach, world famous zoo, and Lego Land, seems like a fun spot for little kids (2). And, of course, we'd love to go to Disney Land at some point (3).

When we feel like we can tackle longer road trips, we'd like to drive to Salt Lake City to visit Adam's cousins and see Utah's national parks (4). In the other direction, Banff national park in Alberta would be another beautiful road trip destination (5).

A ten-year anniversary trip to Hawaii would be a dream come true (6). Flights are actually pretty reasonably priced from here. And we still hope to make that Alaska cruise happen someday (7). You get to factor in some cost savings if you already live in Seattle!

We couldn't leave Pittsburgh off the list. It would be so fun to show them where we went to college and where Claire was born. Maybe we'd combine this with a trip to Cedar Point or Philadelphia or a resort in West Virginia (8).

Here is where Adam and I would probably have to make some compromises. I'm a big city vacation person, so I'd probably pick Washington DC (11) and New York or Boston (12). But Adam is the opposite, so he'd go for more national park excursions like Yellowstone (13) or Yosemite (14). I think we could both agree on the Grand Canyon (15) though!

There's so much of the Pacific Northwest we haven't explored yet - Mount Rainier, the Olympic Peninsula, the San Juan Islands, Lake Chelan, the Oregon coast, Crater Lake. Our closest relatives are in Vancouver and Vancouver Island, so I'm sure we'll make many trips to British Columbia over the years.

If we all do is explore the Northwest and visit relatives, we will be more than happy. But it sure is fun to dream, right?
Posted by Caitlin at 5:46 PM