Why We Bought A Van

Well, not because we're going to have another baby. Not yet! 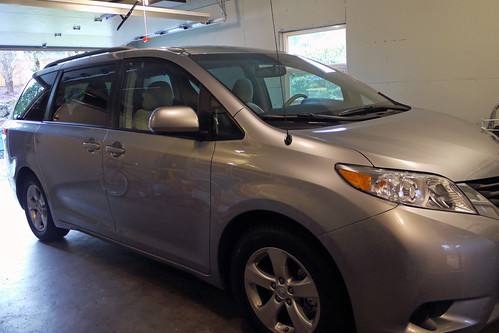 We are hoping to have baby number three sometime in 2016, so we thought we'd buy a minivan in December of 2015, because we'd heard the end of the year was a great time to score a deal.

We moved our timeline up a year because my parents are moving to Eastern Washington and they are going to buy our car (a 2011 Kia Forte). Adam can bike or take the bus to work, so we knew we only needed one vehicle. Since it's so much simpler to sell a car to family, it just made sense to upgrade to a van earlier than we'd originally planned.

My dad is an engineer and worked in the Houston office of a big oil company until he was assigned to a project in Shanghai for three years. It was originally supposed to be two years, but he negotiated three so that my brother, Scott, could graduate from high school there.

Well, as you've probably heard, oil companies aren't doing so hot right now. At the end of year two, my dad learned there wouldn't be enough work in Shanghai to last all the way until the end of year three. And instead of being sent back to Houston, where there's also not a lot of work at the moment, they offered him a position in Washington State.

His company has a government contract to build a nuclear facility there. Construction should last for seventeen years, but he'll be retired before it's completed. Hopefully they will retire somewhere in Western Washington or British Columbia.

I can't believe we are going to have grandparents a four-hour drive away! My dad will be starting work there sometime this spring, but my mom and Scott will be in Shanghai until he graduates from high school at the end of May.

Besides an earlier-than-expected minivan purchase, this also means that we've stopped talking about maybe moving back to Texas before Claire starts kindergarten and have committed to calling Seattle home for as long it will let us. We just really love it here and are so excited to have family in-state!

P.S. We got a Toyota Sienna. We knew we either wanted that or an Odyssey because they're the only minivans with eight seats. The 2014 Odysseys were sold out already, so it was an easy decision.

P.P.S. I'm sure you've heard many times that it's a bad idea to buy a new car. We weren't prepared to pay cash and we knew that we wanted to have this vehicle for a long, long time. So if we went used we would have wanted relatively low mileage. We got 0% interest by going new, which definitely was not on the table for a used car loan. The couple thousand dollar savings of buying a few years older model would have been negated by interest.
Posted by Caitlin at 6:28 PM