Basically, we arrived home from Portland just as the girls needed to go down for afternoon naps. Not the best timing, but they eventually fell asleep. When they woke up, we went to my favorite fabric store so my style adviser could help pick out fabric for a couple little girl sundresses. And that evening, she helped me cut out fabric for a couple Easter gifts. The only way there's any chance of those getting finished in time! 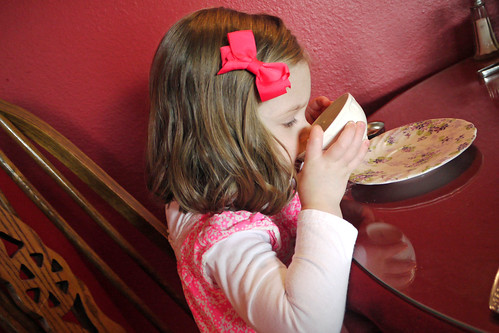 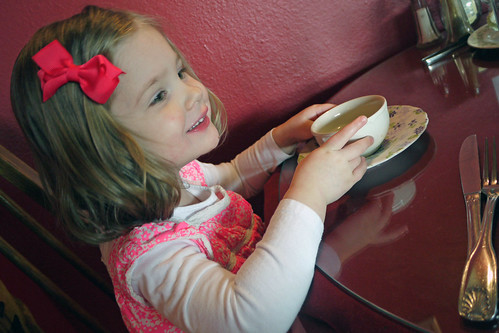 On Tuesday, we got Allie a new iPhone (no more cracked screen!) and headed to Elizabeth & Alexander's Tea Room to redeem a Groupon. But, of course, as soon as we walked inside we were informed that to use a voucher you had to make a reservation 24 hours in advance. It was too late to back out at that point though, because we had gotten Claire all excited about a tea party. So, we forged ahead and were shown to our tiny table filled with breakable china, which we frantically rearranged to keep out of reach of the one-year-old. At least their lemon scones were tasty, but I don't think we'll be rushing back anytime soon. To round out the not-spectacular day, that evening Allie watched the girls while Adam and I went on a riveting date to Costco. 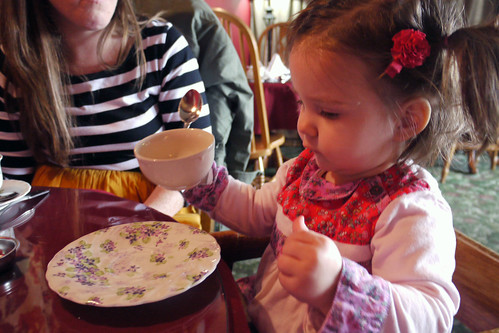 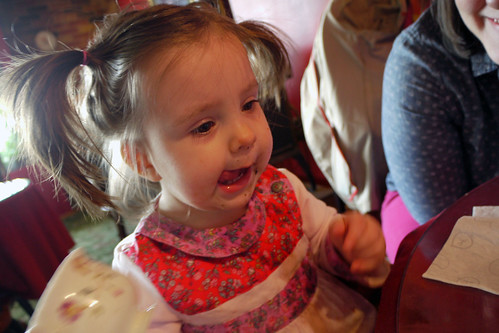 But Wednesday more than made up for it! After living in Seattle for almost three years, we finally took the ferry to Bainbridge Island. And it was totally less intimidating than I expected. We just drove right downtown and onto the ferry. It costs $5 more to drive your car on board, but it seemed easier than figuring out somewhere to park by the waterfront. 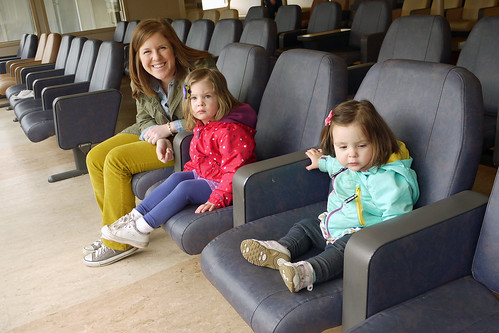 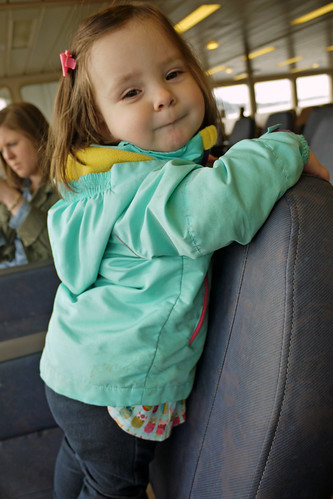 Claire and Maggie were so excited to be on a boat! The thirty minute ride offered some fantastic views of the skyline. 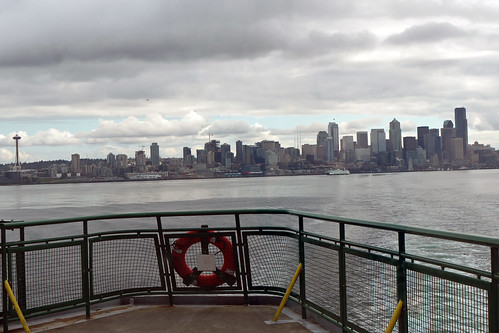 Once we arrived on the island, we had lunch at Via Rosa 11, an Italian market and deli. It's tiny and they don't have high chairs, but the homemade ravioli and meatballs were fantastic. From there, we drove to Fay Bainbridge Park. 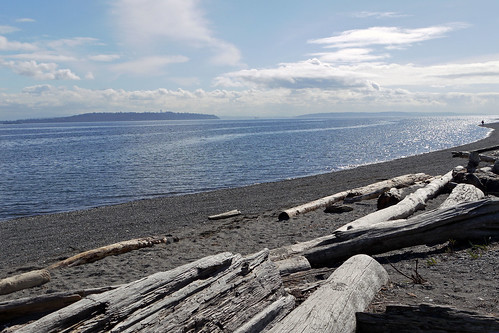 It had a great little play structure and beautiful views of Puget Sound. 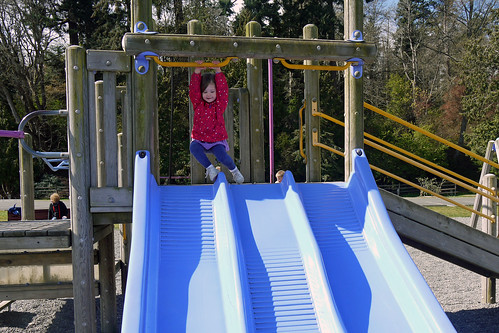 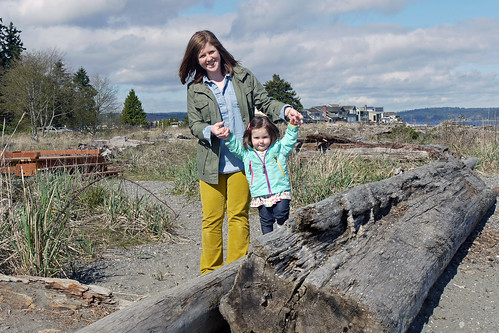 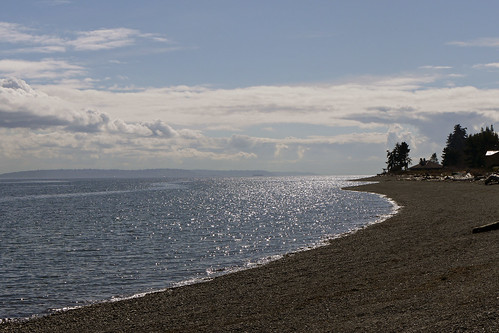 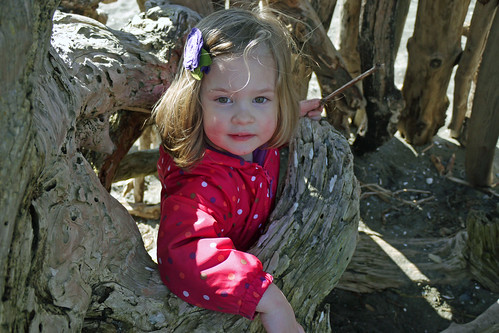 Claire and Maggie loved climbing on all the driftwood. And our selfie attempts turned out wonderfully, of course. 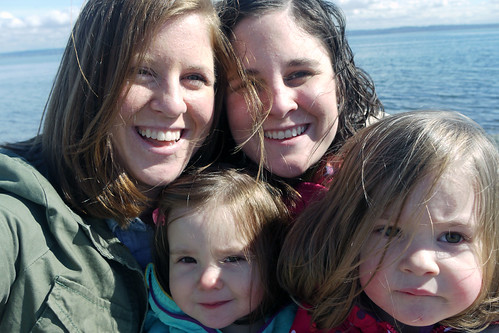 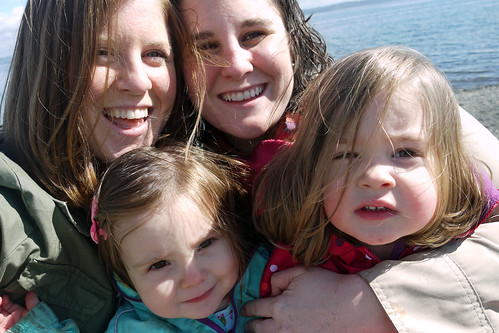 We stopped at the island's cute little library for a bathroom break and on our way to get ice cream, we figured out the advantages of leaving your car in Seattle. A couple miles from the ferry dock, we started seeing signs on the road saying that the shoulder was only for the ferry line. Umm, miles away. Whoa. And finding a parking spot in downtown Winslow was quite a challenge. We did succeed eventually and walked to Mora Iced Creamery for an afternoon treat. 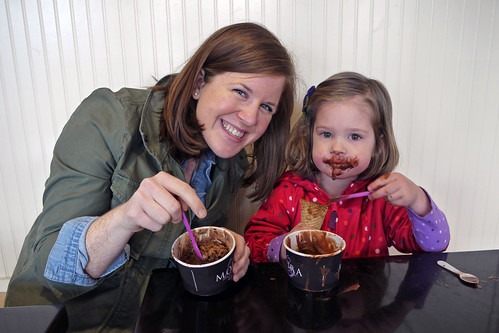 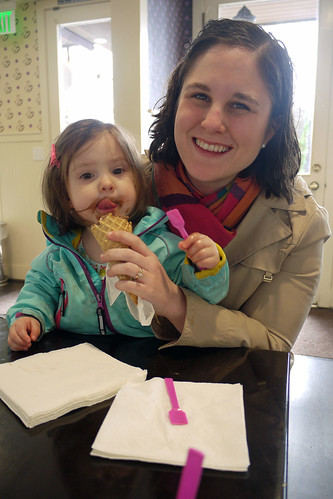 They're known for their blackberry flavor, but we all couldn't resist the chocolate peanut butter. After browsing in a couple shops, we drove back to the ferry. There was a stressful fifteen minute wait when I realized that I had pulled into the truck line and tried to back up into the correct line and almost hit another car and then just worried that they would make us take the next one or something. But of course it actually wasn't a big deal at all.

We took the ferry back to Seattle and drove home to the east side to give the girls a bath, make a simple dinner of grilled cheese, and get them into bed early. Our babysitter came over for a very easy night of work and the three of us went to Cirque du Soleil. They've been performing a show in our main city park for the last six weeks. We gave Adam's parents tickets as an early birthday gift while they were visiting in February and they gave us rave reviews, so we had to see it for ourselves. Whoa, the acrobats were amazing. It definitely lived up to the hype!
Posted by Caitlin at 5:48 PM