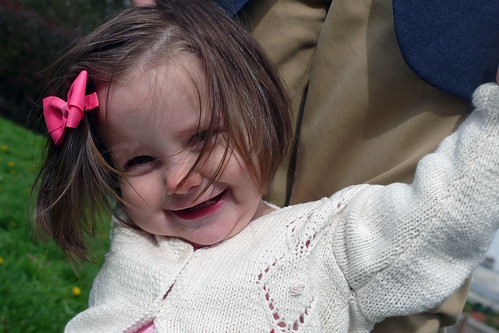 Stopped nursing at fifteen months. We just dropped a feeding every few days and then Adam started putting her to sleep at night. It was a pretty seamless transition for all of us.

Talks way, way more than Claire did at her age. She must know at least fifty words. She's started using some two-word phrases, like "and me!" and "get it!"

Can identify all her body parts and make pretty much any animal noise you could request.

Follows simple commands pretty well, like throwing diapers away and getting sent to retrieve Claire's doll from another room.

Has been giving hugs, prompted and unprompted, for a while, but just started giving and blow kisses all the time.

Climbs up and down stairs very well, but otherwise her gross motor skills aren't quite at Claire's level for this age. Probably because she hasn't had very much time outside or at the playground yet!

Makes the sign of the cross by frantically waving her hand up and down. She chimes in with a loud "Amen!" at the end of prayers. Her Mass behavior is still not great, although she's finally started to make through the whole service contained in the pew. Sometimes, at least. She particularly loves to shake hands during the sign of peace.

Pretends very well. She loves to dress up, mother her dolls, cook in her play kitchen, and take her stuffed dog for a walk. She's developed a fondness for Anna from Frozen entirely due to her big sister's encouragement.

Is a pro at the stacking rings and building block towers, but when we find her quietly occupying herself, she's most likely looking through a stack of books. She's still working on puzzles and the shape sorter.

Dabbles with crayons, markers, and paint, but still can't help giving herself a taste every once in a while. Of course, she has a very short attention span for these activities, but tries her best to keep up with Claire.

Has developed a longer attention span for story time, however. She is starting to move away from board books and request longer stories like "Away We Go", "Tea Rex" and "Who is Driving?"

Wakes up from afternoon nap requesting milk, a cookie (she's content with Fig Newtons) and a show. She'll happily sit next to Claire on the couch for an episode of Daniel Tiger, Franklin, Madeline, or Peppa Pig while I start making dinner.

Tries really hard to sing along with her lullabies before bed and our hymns before meals. She's actually quite good at singing along with the Frozen soundtrack in the car, probably because it's all she's heard for the last six months!

Has become a great participant at music class recently. Of course, she's been tagging along to the toddler class since she was born, but it's really fun to see her learn to follow directions properly and come out of her shell all of a sudden.

Has much more patience for things she doesn't want to do, like having her teeth brushed, hair washed, face wiped, and hand held in parking lots. She still throws near daily tantrums over getting her clothes and diaper changed.

Is not a very picky eater. She will happily eat vegetables, particularly broccoli, and try new foods. She is not very adept at using cutlery yet, though, and still has the frustrating habit of tossing food on the floor all too often.

Knows that crying babies go to bed and the mention of it is usually enough to stop a tantrum. Of course, she is a world-class whiner, particularly when she's waiting for a meal to be served or we're trying to get ready for the day.

Does not hold her breath while upset or get car sick like her big sister. So far, at least.

Takes a two to three hour afternoon nap and sleeps between eleven and twelve hours a night. She almost always goes down very easily, even waving and blowing kisses after we lay her down. We've been pretty successful at limiting the pacifier to just the crib. 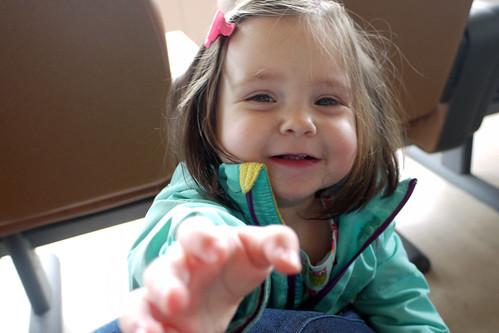 It's funny how we thought Claire was so grown up at this age. I guess we're not ready to accept that Maggie is becoming a full-fledged toddler just yet!
Posted by Caitlin at 12:00 AM