And we're back with my resolutions for the second half of the year! 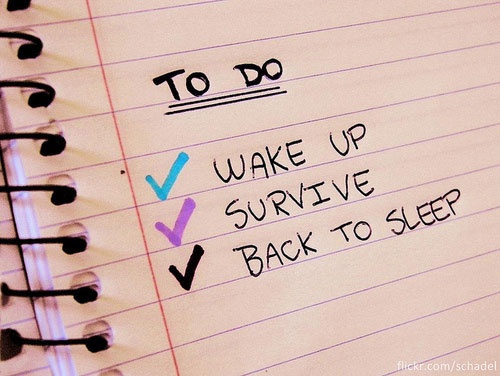 July and August:
- Enjoy the summer of no babies. This is our first summer in Seattle with no babies or big pregnant bellies and we want to make the most of it. We have lots of visitors coming, we're finally going to make it to Mt. Rainier and the Olympic Peninsula, and we're spending a weekend away for our fifth anniversary.
- Finish a lot of little house projects, both inside and outside. Mostly lots of quick painting projects I've been waiting for warm, dry weather to tackle.

September and October:
- Make pelmet boxes for the living room, kitchen, and play room. Full-length curtains won't really work in those rooms, but it will be nice to have some sort of window treatment up.
- Plant tulips and daffodils in the Mary garden. An hour spent planting in the fall for a beautiful garden come spring.
- Build some toy cubbies for the living room. We want some toy cubbies for under the window in our living room, but the Ikea Expedit dimensions don't quite work. We're planning to build something very similar that will fit the space perfectly.
- Celebrate Maggie's second birthday. We'll throw her a little party, of course, which will hopefully not be Frozen themed. I'd also like to make her a name pillow and a baby carrier.
- Make a quick trip to West Virginia for a wedding over Halloween weekend. A good friend is getting married and Adam's family will all be there for a quick reunion. It is fairly complicated to get from Seattle to small town West Virginia, but thankfully we were able to cash in our air miles to join everyone. The wedding is on Halloween, so I'm not sure if we should just skip it completely this year? Our toddlers won't know the difference...

November and December:
- Deep clean the house again. I spent all of Lent deep cleaning our home room-by-room and since then I've gone back to my just-the-basics weekly cleaning schedule. Next spring will be pretty busy for us, so I'm planning another deep clean in November instead. Maybe this time we'll actually finish organizing the garage.
- Build Claire and Maggie a "multi-purpose stand" for Christmas. We want to build a copycat of this Land of Nod play stand to go with the girls' kitchen, their big gift from last year. It can be a grocery store, puppet theater, or many other imaginative possibilities.

Other:
- Throw an Assumption or Michaelmas party. We try to throw a liturgically themed party twice a year. We had a Mardi Gras party in February and a Michaelmas party last September. But Assumption is on a Saturday this year and it's date in mid-August means we could throw an outdoor barbecue, which is both easier to pull off and allows us to invite more people.
- Get in the habit of going to the Y in the late afternoon. I've recently renewed my Y membership now that Maggie is perfectly happy to play in the childcare. In the past, I've tried to go in the morning before running errands, but it was just too much going on. I need to get in the habit of going from 4:00 to 5:00 in the afternoon, between naps and dinner. Also, I really, really need to bite the bullet and stop faking Claire's age so she can go in the under-three room with Maggie.
- Spend less on going out to eat as a family and more on date nights. We want to go to the symphony and to see the new version of the Nutcracker (designed by Ian Falconer, author of the Olivia books!) this fall. Which means less trips to Chipotle and Chick-fil-A as a family.
- Schedule a regular time for one-on-one play with Claire. Starting in the September, Claire will be in Catechesis of the Good Shepherd for two hours, one morning a week. Which means one-on-one time with Maggie! I'd like to get some quality solo time with Claire too. I think I'll let her skip nap/quiet time once a week (maybe Friday?) so we can play board games, bake, or do a craft.
Posted by Caitlin at 6:26 PM