Recent Reads: May to August 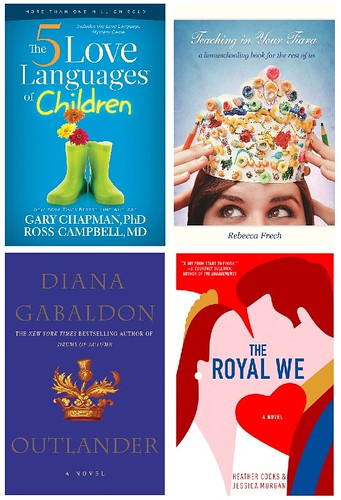 The Five Love Languages of Children, Gary Champan and Ross Campbell. We read this in our parish mom's group book club this spring. It was much better received than Parenting With Grace, which we read in the fall, but not as big of a hit as The Temperament God Gave Your Kids, which we read the previous year. Apparently you can't figure out your kids' love languages until they're over five, so pretty much a moot point for me right now.

Teaching in your Tiara, Rebecca Frech. We have two years until Claire is in kindergarten and I want to spend this time educating myself about all the different schooling options. Obviously, homeschooling is the option I know the least about, besides the expertise of several older friends who are a few years in already. Rebecca, a Catholic homeschooling mom of many, does a great job of covering the basics of how homeschooling actually works.

Outlander Series Books 1-3, Diana Gabaldon. These Kindle version of these books go on sale really cheaply all the time and it's only a couple dollars extra to add the audio too. Then you can use Whisper Sync to seamlessly switch between the two. Perfect for fueling my obsession with this story of a woman time traveling to 18th century Scotland while still allowing me to finish chores. There's eight books total and I'm currently on book four, but found myself losing steam.

The Royal We, Heather Cocks and Jessica Morgan. So I switched to this book instead, after hearing favorable reports from all my favorite book recommendation sources (Christy, Anne, and Janssen). I was totally hooked immediately and finished over the course of three days. It's been billed as Will and Kate fan fiction. While the novel does share some similarities with their story, it's always got plenty of differences, like the fact the princess is American and the prince's mother is still alive, to keep the story fresh. 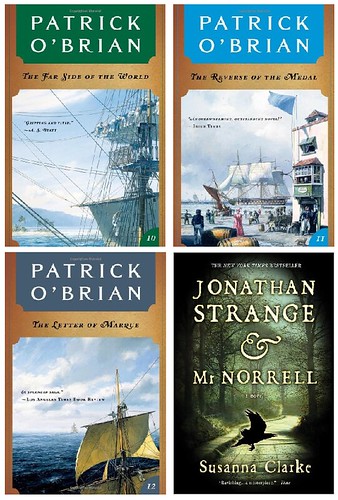 Aubrey-Maturin Series Books 10-12, Patrick O'Brian. Adam's still plugging away at this series about the British Navy during the Napoleonic Wars. There's twenty books all together, so the finish line is in sight!

Jonathan Strange and Mr. Norrell, Susanna Clarke. When the BBC miniseries came out, Adam discovered this book and knew it would be right up his alley. Considering he stayed up until 2:00 am to finish it one night last week, I'd say he was most definitely right. 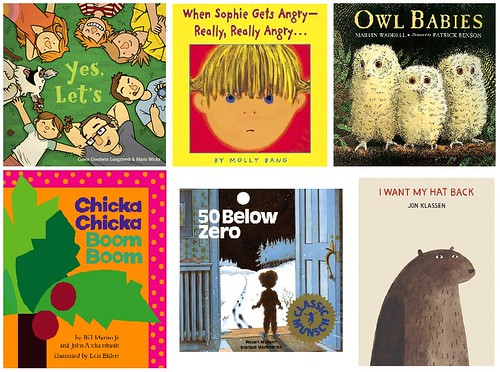 These are all books I'd grab when reading to the girls together. They're short enough to hold Maggie's attention, but long enough to still captivate Claire without her feeling like it's a "baby book."

Yes Let's, Galen Goodwin Longstreth. This book about a family of six spending a day hiking is one we checked out from the library and immediately loved enough to purchase for our own collection.

Owl Babies, Martin Waddell. Maggie loves to chime in with "I want my mommy!" on every page, while Claire loves how brave the two older owl babies are when they wake up to find their mom out hunting for breakfast.

Chicka Chicka Boom Boom, Bill Martin Jr. Maggie likes to shout "Boom!" whenever appropriate, while Claire is busy pointing the first letters of each of our names. They both enjoy singing the ABCs and pointing to each letter on the first and last pages.

When Sophie Gets Angry, Molly Bang. Sophie's sister takes her the toy she was playing with and her mom insists that it's her sister's turn now. Oh, is Sophie angry. The rest of the book walks us through Sophie calming herself down and returning to play with her family.

50 Below Zero, Robert Munsch. Out of all the hilarious Robert Munsch stories, this one consistently has both girls erupting in peals of laughter. I not-so-secretly love how they insist that Mommy read it, because apparently I do the voices so much better than Daddy.

I Want My Hat Back, Jon Klassen. A bear searching the forest for his favorite hat. That rabbit really shouldn't have crossed him...
Posted by Caitlin at 5:49 PM