Adam's brother, Alex, and his wife, Kate, came to visit this weekend. Out of Adam's three older brothers, Alex is closest to him in age - they are three years apart. Alex and Kate flew out from Washington D.C. on Thursday evening. Adam had to work on Friday, but the rest of us went to Pike Place Market and then got completely drenched at Gas Works Park. The view of the skyline wasn't quite the same as when we were there in September! 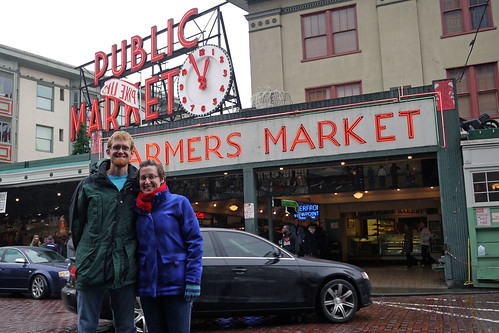 That evening, we got a babysitter for the girls and had dinner at Monsoon, a Vietnamese restaurant in Capitol Hill. Afterwards, we went to Sherlocked Seattle. It's an escape room! We first heard about the idea from my mom and sister, who went to one in Ottawa while visiting family earlier this fall. Turns out there are several around Seattle, but this was the only one that took teams of four people. We picked the "secret office" option - we were spies that had to get a gold bar out of a safe and then escape from the locked room. You have one hour to solve the various clues and puzzles. We got the gold bar out of the safe (which was actually in another hidden room!) but we didn't get ourselves out of the office in time. It was a lot of fun and definitely something we'd try again. 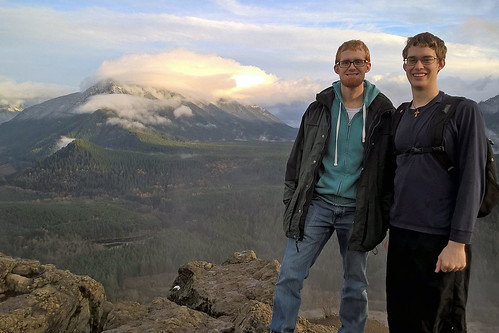 On Saturday, we went to the Museum of Flight, a perfect rainy day activity for adults and toddlers alike, followed by lunch at Jack's BBQ and a quick stop for dessert at the Fran's Chocolates factory. We found out that they'd never seen Tangled, so Claire and Maggie made sure to rectify that problem, which made for a very cozy afternoon. After Mass on Sunday, the clouds parted and the sun actually came out for a while, so Adam took them on a hike up Rattlesnake Ledge. We dropped them off at the airport Monday morning. I wish I had pulled out my camera more during their visit! 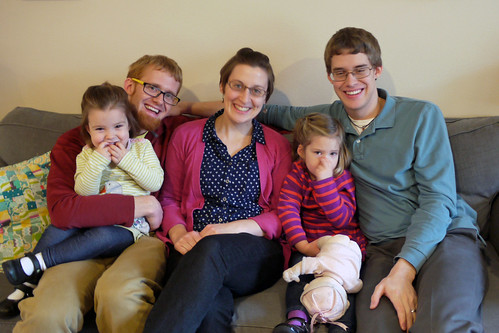 We had a fantastic time showing them around Seattle. As much fun as it is when Adam's family of fourteen is gathered together, it's also really great to see them in smaller groups. When everyone is together, we have to focus so much on wrangling our small children (who are out of their element in a new place among a large group of people) that we feel like we never get to see anyone as much as we'd like. I'm so thankful that almost everyone in Adam's family made the trek out to Seattle this year. All of us, especially Claire and Maggie, really appreciated getting to spend quality time with his parents and siblings. If we have to live so far away, I'm glad that at least we live in a vacation destination!
Posted by Caitlin at 6:01 PM