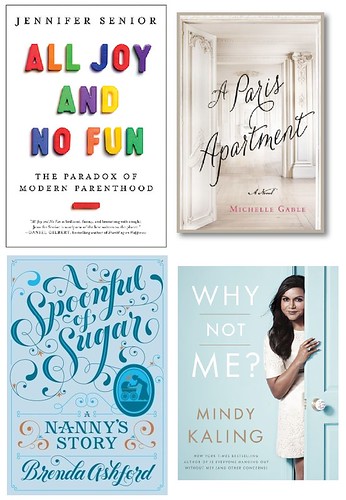 All Joy and No Fun: The Paradox of Modern Parenthood, Jennifer Senior. This was a really interesting look at modern parenting from a secular perspective, i.e. how do people who don't believe openness to life is an integral part of marriage feel about parenthood? If your goal for your children isn't getting them into heaven, what is your goal for them? The author's TED talk is very informative and gives you a good summary of the book.
A Paris Apartment, Michelle Gable. This had a very similar feel to "The Girl You Left Behind" by JoJo Moyes, which I read earlier in the year. Both about a piece of art, both telling two stories - one about the subject of the painting in the early 20th century, one about the painting's current owner or discoverer. And both set in France, which is always a plus in my book. I picked it up from the new releases display at the library and read it on the plane to and from Nashville, even though I was traveling solo with two toddlers. Thank you screen time!
A Spoonful of Sugar: A Nanny's Story, Brenda Ashford. I heard about this book from Sarah at Clover Lane and immediately put it on hold at the library. I loved this book so, so, so much and did not want it to end. It's the memoir of a British nanny, written when she was in her nineties. She came of age and started working as a nanny right at the onset of WWII. I loved the description of her peaceful childhood and the old-fashioned child-rearing advice she doles out - the importance of a routine, spending time outdoors, reading aloud together, etc. Seriously such a charming story.
Why Not Me?, Mindy Kaling. When I had a stomach bug a few weeks ago, I spent the day in bed reading this book. It's a very easy and funny read. I like Mindy's books more than those of other female comedians, like Tina Fey and Amy Poehler. She just seems more relatable somehow. My favorite chapter was her day-in-the-life on the set of the Mindy Project. Writing and starring in your own show is a ton of work! 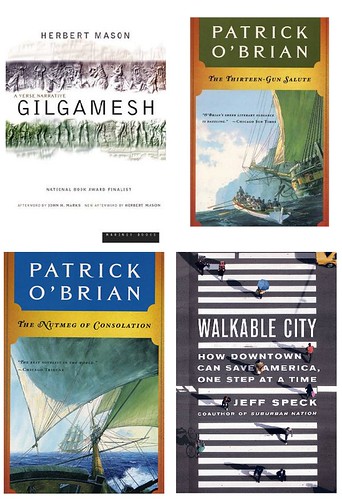 Gilgamesh: A Verse Narrative, Herbert Mason. This epic poem clocks in at not quite a hundred pages, but it's kind of a major classic, so we'll count it towards the book total. He saw this on the clearance rack at Half Price Books and, for the grand total of a quarter, was inspired to pick it up.
The Thirteen Gun Salute, Patrick O'Brian. He's still chugging along with the Aubry-Mautrin series about the British Navy during the Napoleonic Wars.
The Nutmeg of Consolation, Patrick O'Brian. The title of this one makes me laugh. This is book fourteen out of twenty-one, so he's two-thirds of the way done.
Walkable City, Jeff Speck. We actually both read this book. I read it first, on our trip to West Virginia (another big win for screen time) and interrupted Adam's reading so often to tell him interesting facts that he was inspired to read it as well. It's a really fascinating look at urban living, city planning, biking, public transportation, etc. These are already issues we build our priorities around, since we pay more in rent to live close enough to Adam's work that he can have a quick bike commute, allowing us to spend more time together and rely on one car. But this book helped us narrow down the ideal area we'd love to buy a house in one day - Adam would have a slightly longer bike commute but we would be able to walk to our church and a strip mall with a grocery store, drug store, hardware store, post office, etc. We would both highly recommend it. I heard about it from my favorite book bloggers, Janssen of Everyday Reading and Anne of Modern Mrs. Darcy. 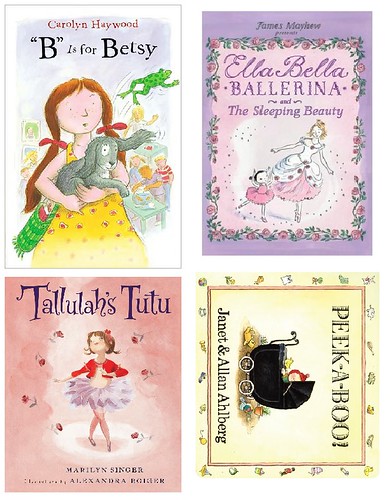 B is for Betsy Series, Carolyn Haywood. I started reading this series aloud to Claire in September. It's about a little girl named Betsy growing up in small-town America during the 1940s. The stories are irresistibly charming, with short chapters and illustrations every few pages. I loved reading about how childhood used it be - Betsy doesn't start school until first grade, but even then it's only half day and she takes a nap every afternoon! We read the first four books, which have been re-printed, and then found one more out-of-print story at the library, Betsy's Winter House, all about a big blizzard right before Christmas.
Ella Bella Ballerina, James Mayhew. When I'm looking for a picture book to capture both Claire and Maggie's attention, lately I've been turning to ballet for inspiration. Our girls are a little obsessed. This series tells the stories of all the most famous classical ballets - Sleeping Beauty, Cinderella, Swan Lake, The Nutcracker, and a Midsummer's Night Dream.
Tallulah's Tutu, Marilyn Singer. Another cute series about a little ballerina, Tallulah. I love that her younger brother also takes ballet, illustrating that it's not just for girls. There are five books in this series as well - my favorite is probably the one about her first performance in the Nutcracker.
Peek-a-Boo, Allan and Janet Ahlberg. If I'm reading just with Maggie, we will usually still go for a board book. She doesn't have as long of an attention span for stories as Claire did at her age. She loves "Each Peach Pear Plum" by the same authors and has been asking for this one on repeat since she received it as a birthday gift. It's about a family's day, through the eyes of their baby boy, in what appears to be mid-century London.