I turned twenty-five on a Monday! I would highly recommend having your birthday on a holiday weekend. Well, unless you want to travel on that holiday weekend, because then you might have to fly across the country with a sick toddler, like my birthday last year. But a long weekend at home where you get an extra day of family time? Can't beat it. 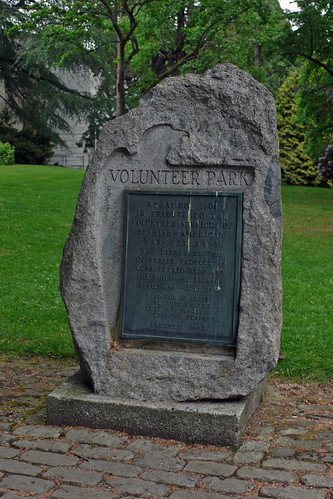 We kicked off the festivities on Saturday with a trip to Volunteer Park in Capitol Hill. We originally planned to take the ferry to Bainbridge Island but it was a pretty overcast day, so we decided to save that outing for a sunnier day later in the summer. 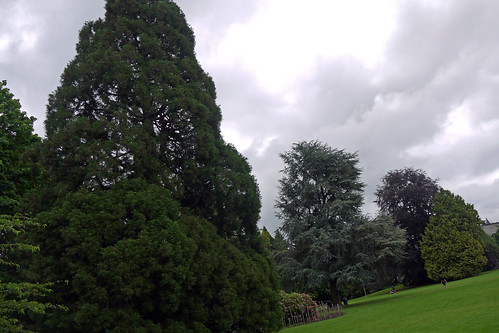 Volunteer Park was designed by the Olmsted Brothers, one of the first landscape architecture firms at the turn of the last century. In less than a decade, they designed the Seattle park system, the University of Washington campus, and the Washington capitol building grounds. I guess the government decided if they were paying for them to take the train all the way out here, they might as well get their money's worth?

Volunteer Park has a conservatory... 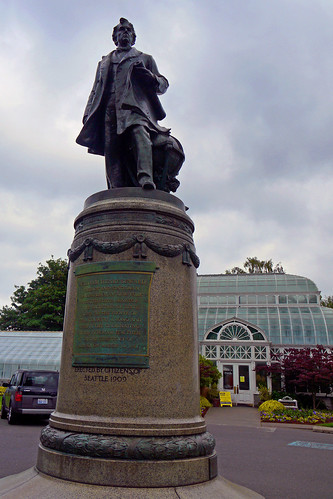 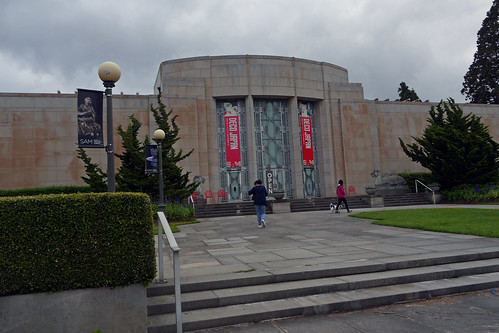 ...and a pretty reservoir. 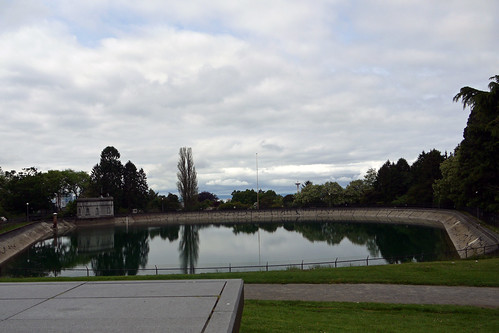 The biggest attraction, though, is a water tower. You can climb up to the top and see beautiful views of the Space Needle, downtown, and Puget Sound. 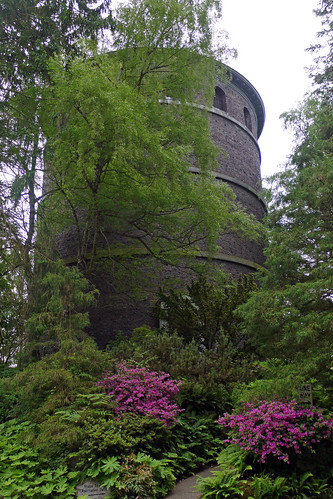 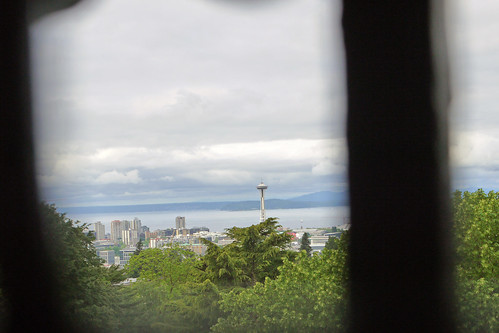 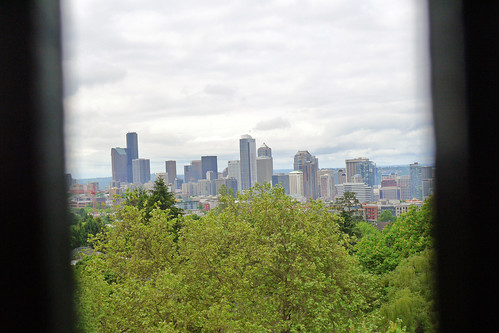 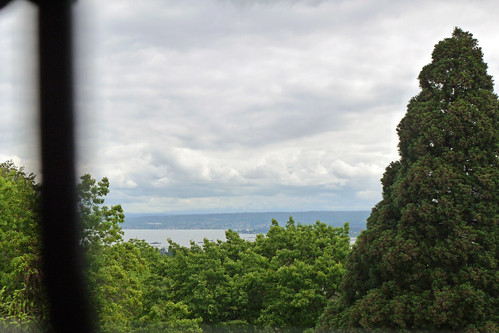 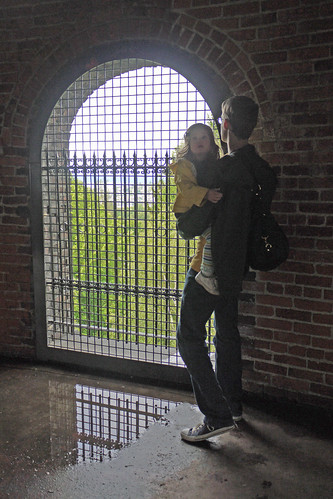 Once we recovered from lugging babies up and down those stairs, we saw some ducklings... 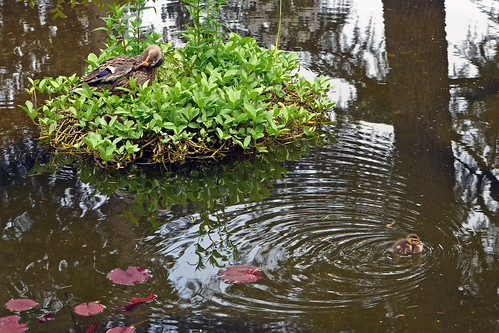 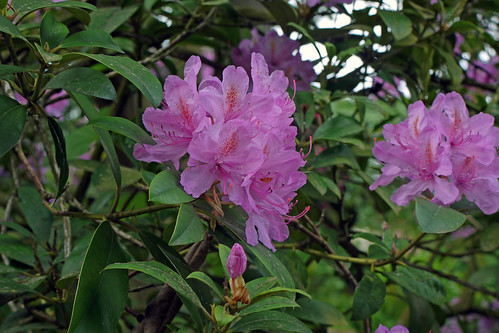 ...and some crazy trees. 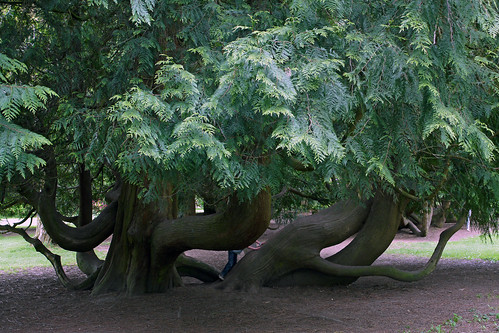 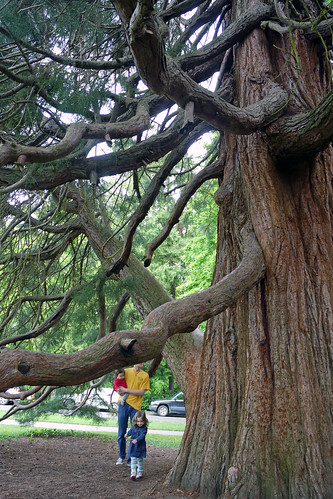 Then we had a picnic lunch... 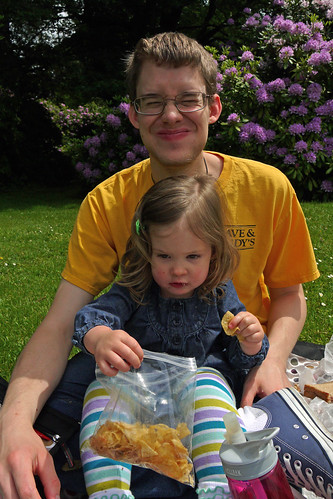 ....during which Maggie took great pleasure crumpling the wax paper we wrapped our sandwiches in... 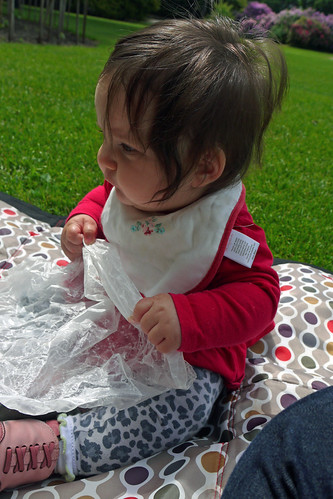 ...and Claire just couldn't sit still for a second.

After a brief sojourn at the playground, we stopped for a treat at Hello Robin. Capitol Hill is full of fun (and fancy!) restaurants. I had heard lots of good things about this bakery a few minutes from the park. 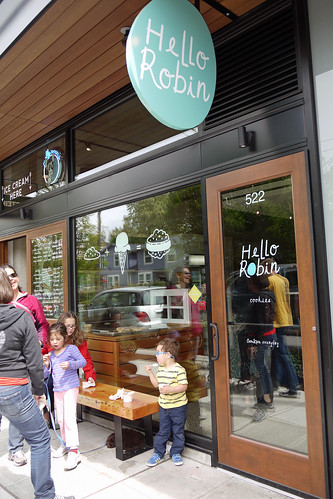 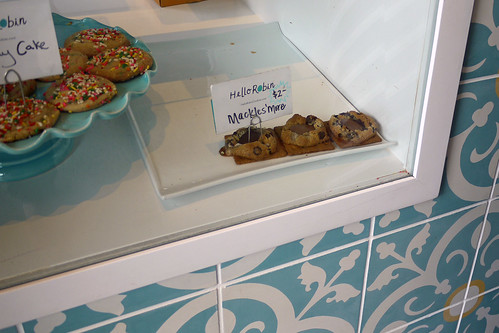 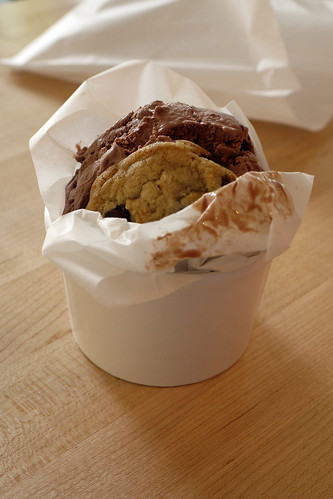 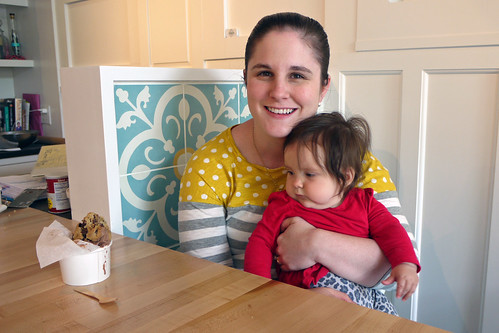 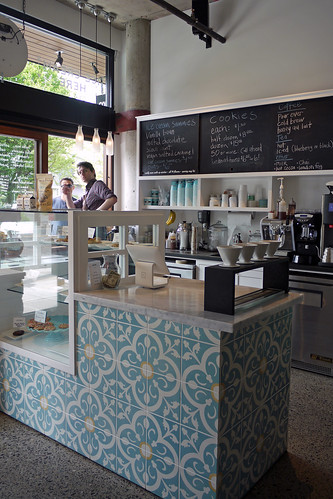 We had debated about going to Molly Moon's instead, but were glad we went here because they sold Molly Moon's ice cream as well. I went with an ice cream sandwich, Adam tried a couple different types of cookies, and Claire got a little dish of chocolate ice cream that she managed to make quite a spectacular mess with. Maggie got a wooden spoon to chew on as she enviously watched the rest of us. Their chocolate chip cookies were amazing!

I majorly slacked on taking pictures the rest of the weekend, but on Sunday we got a babysitter and had dinner at Ray's Boathouse, a seafood place in Ballard. Although the food was really good, the spectacular view of Puget Sound was the best part. Well, besides the kid-free conversation, that is.

On Monday, after our traditional birthday breakfast of croissants, we had planned to take the girls to the children's museum in Bellevue (we have a membership there). There's a Nordstrom Rack in the same mall that I was hoping to sneak into for a bit while Adam watched the girls. Despite the calendar on their website indicating otherwise, when we arrived we found out they were closed for Memorial Day. So, we salvaged the morning by grabbing a picnic lunch from Panera and heading to a nearby playground, where Maggie got to try the slide for the first time. Doesn't she look so enthusiastic?

During afternoon naps, I got my haircut. At the very last minute I decided to go short. Literally, I was texting my sister for her thoughts while I was parked in front of the salon. I've been in such a "throw it in a ponytail" rut lately, so I decided to eliminate the possibility of a ponytail altogether! 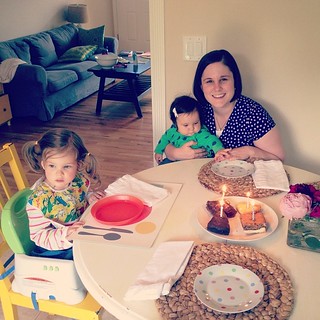 When I got home, we had cake (Adam had picked up a couple a different slices from a local bakery). My birthday was the first time Claire's really gotten the whole concept. Probably because she remembers her birthday in March and Adam's in April. They picked some flowers from the yard for me and drew me a card. Claire was so excited for birthday candles and actually sang the "happy birthday" song. I loved it. Apparently when she woke up from her nap and they were waiting for me to get home from the salon, she couldn't stop repeating, "mommy! cake!" over and over. 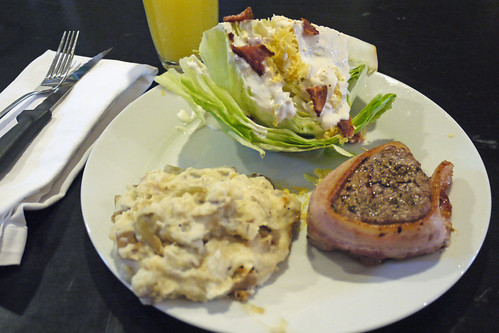 We put the girls to bed early and Adam made a delicious dinner of steak, garlic mashed potatoes, and salad (from the Pioneer Woman's latest cookbook, of course). We watched Monuments Men and really enjoyed it. We don't often have time for movies lately (the last one we watched was About Time on Valentine's Day) so it felt like quite a luxury! 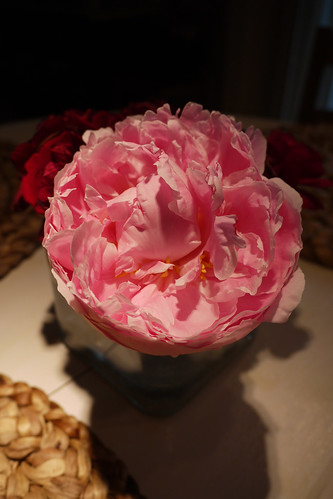 So that's how I capped off the first half of my twenties! In the last five years, I traveled around Europe, got married, graduated from college, moved across the country, and had two kids. My life isn't exactly what I thought it would look like at twenty-five.

It's even better. I love my husband. I love sweet little girls. I love that my husband has a job he enjoys, that's very family-friendly, and that allows me to be a stay-at-home-mom. I love our little house. I love our church and our friends. I love living in Seattle.

I wonder what the next five years will hold? I've gotta say, I'm looking forward to Adam turning twenty-five next year. On our summer travels next month, I will have to take over the rental car driving responsibilities. Which maybe didn't go so well last time, when I was twenty-one and Adam was twenty. DC traffic circles, I'm looking at you...

P.S. Another one of our favorite Seattle parks is Golden Gardens in Ballard. See here, here, and here for more scenic shots of Puget Sound and the Olympic mountains. It's not too late to book a summer trip to Seattle, you know. We've got a guest room that's calling your name!

P.P.S. That awesome sister of mine gave me a custom watercolor portrait of our family as a birthday gift. I'm soooooo excited for it to arrive!
Posted by Caitlin at 6:01 PM